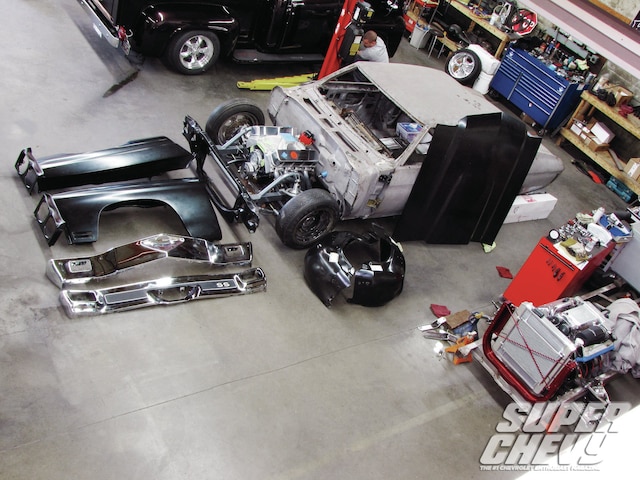 There are always going to be discussions about which is the best Chevelle ever produced. Some like the boxy lines of the early stuff, while others gravitate toward the rounder later models. Hopefully we can all agree that the 1970 SS fitted with the 450hp LS6 was the peak of Chevelle power. All the Chevelles before and after had less steam, so this year holds a special place in more than a few greasy gearheads' hearts. Even though GM produced over 300,000 two-door Chevelles in 1970 it's still difficult to find one on the cheap. If you look to the '71-72 models, there are more than 400,000 built between those two years so there is more opportunity to find a low-buck one to use as a project.

So what is a grease monkey supposed to do if his heart is set on a '70 but can only locate the later versions? Convert it. This is the case with a customer of B.S. Industries in Sun Valley, California. The owner wanted a '70 but found a '71 for a reasonable price. When we spoke with Bodie Stroud, owner of B.S., he let us know about this conversion he was about to start. We jumped in with both feet to cover the job and show what parts it takes to complete the conversion.

Now for all you purists out there, please don't get upset. This conversion is not being done to cheat anybody. There's nothing wrong with '71-72 Chevelles, but as we all know the best car to own is the one you actually want. The car is already fitted with a Schwartz Performance chassis and a few other non-factory upgrades, so there is no way this car will be mistaken for an original anyway.

Bodie likes to use quality parts for his builds, and this one is no different. He ordered everything for the job from Original Parts Group except for one part that he nabbed off of eBay. "It was nice to be able to get everything from a single supplier," says Bodie.

We stopped by the shop on multiple days as the work progressed to get all the pictures. If this Chevelle turns out as nice as the rest of Bodie's builds, you will be able to see the finished product as a feature.