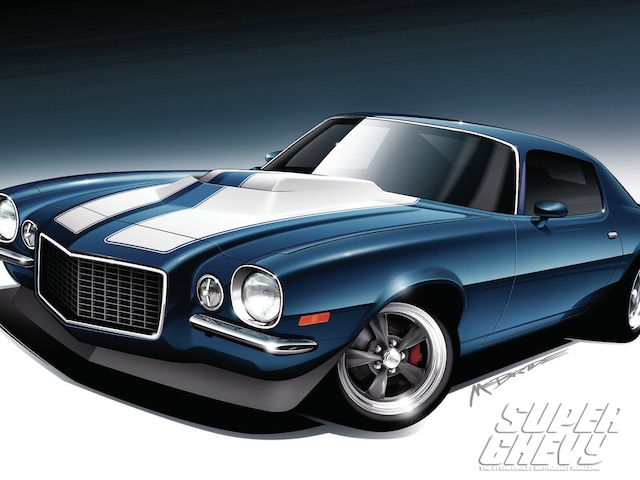 For many, the mere thought of bodywork invokes an involuntary action of searching for a professional to handle the job. Some are talented enough to handle this type of work themselves, but for most turning wrenches on a chassis and engine suits them better. Luckily, our project leader on Project Back to the Street (BTTS), Bob Gonier, is a master at all trades in building muscle cars, and an even bigger bonus is that bodywork is his area of expertise and the subject of the classes he teaches at the Mercer County Technical School.

As a refresher, BTTS is a '71 Camaro that we took hostage and are slowly converting from a dedicated bracket-racing vehicle into a street brawler. It is a task that has required nearly a ground-up attack, and we enlisted the help of Gonier and his students. Up until this point, the body was stripped of its lightweight fiberglass components and replaced with new sheetmetal from National Parts Depot and Ground Up Restorations. Underneath the shell sits Fatman Fabrication G-Tech suspension fore and aft, QA1 coilover adjustable shocks, and Wilwood brakes. Rocket wheels adorn all four corners and are wrapped in Nitto 555 rubber.

Powering this soon-to-be-complete street machine is a GM Performance Parts ZZ454 crate engine. On the engine dyno, it produced 502 hp and 547 lb-ft of torque thanks to a Holley 770-cfm carburetor, 1.5-inch carb spacer, and 2-inch headers. A Level 10 4L80E automatic overdrive transmission and torque converter are bolted to the 454ci big-block.

We turned to a plethora of aftermarket companies to create a street car that will be reliable, capable of hitting the turns hard, and stopping without any drama (again and again). Some might call it a G-machine, but in reality it is our version of the ultimate street cruiser that will run the autocross and hit the drag strip with regularity. This month, Gonier and his students have made sure BTTS is also good-looking to go with its performance. Please don't for a moment think that Gonier did all the work and his students only handed him tools. The story here is that Gonier has the students handle most of the work as he watches over them and instructs them on the proper technique.

He also cautioned us that they began with painting the door jambs first and then they went back and painted the car later. It is not the normal process, but they had to work around the school schedule. The students do not have 12-hour days and must work within the class schedule to accomplish tasks. Gonier needs to modify the process to accommodate their schedule. "It is easier to break things up in sections so the kids can learn how to do it themselves," commented Gonier. He continued, "I prefer to paint the door jambs and the car at the same time to eliminate any and all paint edges but we had to do the jambs first because of our time constraints. The school requires everyone to be out by 5:00 p.m."

Gonier does his best to have the students handle all the work, but some parts of this project were a little over the students' skill level. At that point, Gonier gets his hands dirty and performs his magic, but for the most part the students keep an active roll in the build-up. He worked side-by-side with the students to ensure the body was perfectly straight and ready for paint. They first applied DuPont ChromaPremier sealer and let it dry for an hour. The sealer is used so there is a consistent base to paint on.

Once that dried, the students sprayed three coats of DuPont ChromaPremier Hot Hues basecoat (Jazzy Blue) and three coats of DuPont 7900S clearcoat. They let the car sit for a few days to ensure the paint was dry and then sanded the hood, roof, and trunk so the stripes could be laid on the '71 Camaro. "The program teaches these students basic skills and they did almost all of the bodywork, except laying the stripes," stated Gonier. He went on to tell us that the stripes are within 1/64 inch in variance, front-to-back and side-to-side. He said the students learned how to apply the stripes, but Gonier handled the rulers and tape to ensure the stripes were perfect. He prefers the stripes to be year-specific, so the white paint is '71 GM White. The finishing touch was another layer of DuPont 7900 clearcoat.

Gonier had the students install the crate engine as he readies the car for its trip south to Super Chevy's Tampa headquarters, where the staff will perform the final assembly.