We Decided That Wider Is Actually Better When It Comes To Our '68 Project Car. 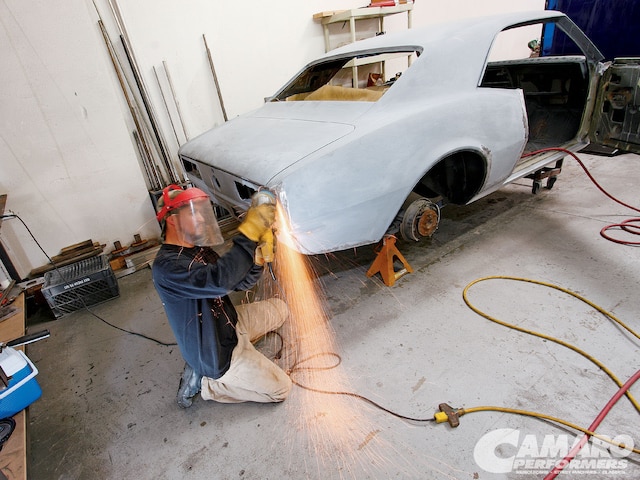 Sometimes the problem with getting a really killer rendering done of your project is the difficulty it takes in getting the finished car to look just as cool. After all, the artist can take liberties that just aren't feasible in the real world. This was our dilemma. Ben Hermance knocked one out of the park with his drawing of our Track Rat project. The body in his drawing simply oozed attitude that we just didn't know how to capture in the actual build. Then we ran into Cris Gonzalez of JCG Restoration & Customs in Oxnard, California. We were shooting a nice '68 Z/28 (which you can see in this very issue) that he had built previously and he mentioned something that peaked our interest.

Seems that he has been experimenting with doing quarter-panel stretches on first-gen Camaros, specifically '69s. We started talking about our '68 and it turns out that Cris had wanted to try his process on an earlier first-gen. The more we thought about it, the more we realized that this could be something that would infuse that missing attitude into our project car and help it stand out from the crowd. Now we just had to figure out a way to break the news to the guys over at Best of Show Coach Works, who had spent so much time massaging the Track Rat's quarters in preparation for paint.

After talking it over and compensating them with a few adult beverages, they agreed that this would be a cool modification to the project. A week later the 'Rat was on a trailer heading 160 miles north for the cosmetic surgery.

Now we're not going to sugarcoat this, and tell you it can be done in your driveway using common handtools in an afternoon. The fact is that this modification was not easy by any stretch of the imagination. The tools required aren't terribly specialized, but it takes a ton of fabrication skill to pull this off and have the finished product look right. But if you're good with a welder, and a have that fabrication gene that most of us are lacking, then it's certainly possible. And if it's a bit outside your comfort zone then rest easy knowing that there are guys like Gonzalez who can get it done for you.