Tony Rose Put All His Eggs In One Basket, Unfortunately They Came Back Cracked, Full Of Body Filler, And Totally Misaligned. 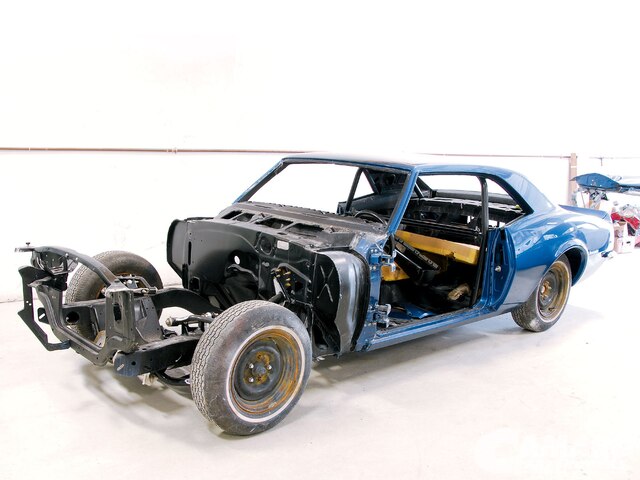 •We’re all too familiar with the phrase “every picture tells a story.” Most of the time, you can look at an image and fondly recall a moment that captured an exceptional experience that you never want to forget. Sometimes though, a picture can tell a much different story—one of strife you’d much rather put behind you. Back in the February 2009 issue of Camaro Performers magazine, we introduced you to the Karma Camaro and its owner Tony Rose. Tony is your average hard-working guy who happened to invest six years of dedication into his ’68 Camaro. He dialed in every detail on his own through long nights working in his garage. Knowing how he wanted his car to look, he rode that rail with a vengeance, but he got to the point where he just needed to have the body freshened up before the final icing was laid. However, the pictures you saw in that issue told a totally different tale.

Stories of honest people getting taken to the cleaners from less-than-honorable business owners aren’t the norm in our [Camaro] world, but every so often it happens. When Tony contacted a shop to take on the final transformation of his car, he struck a deal that was designed to net him a car with a nice driver-quality paint job that would be done in a reasonable amount of time. What was promised and what the shop actually delivered was far less than what Tony had envisioned. Not only was the car delivered way late, but upon seeing the car for the first time, Tony realized his expectations of having a nice ride had been instantly thrashed. Unfortunately, six long months of anxious anticipation left Tony stranded on the boulevard of broken dreams with empty pockets.

Being a moderator on the popular lateral-g.net message board, Tony shared his story with fellow members about his experience and how he was left in a lurch by a dishonest shop. In a time when it seems the world has become very uncaring, Tony’s story caught the attention of thousands of the lateral-g members, including Peter Newell of Competition Specialties in Walpole, Massachusetts. A longtime member of the lateral-g community, the hot rod shop owner was horrified when he read about Tony’s experience and immediately contacted him to offer some help. He told Tony that if he could get the Camaro to his shop, he would take care of completely redoing it. It’s just like Peter to step up and help a fellow car owner out of a bad situation. Well, once the lateral-g.net community heard of Peter’s generous offer, the members banded together with lateral-g owner Scott Gulbranson and set up a PayPal account on the web site designed to help finance the 3,000-mile transportation bill. But wait, it gets even better. Since many aftermarket auto-related businesses are regular participants and advertisers on the site, they also began offering up parts to help complete the job.

Hearing this story helps put a little faith back into society. The lateral-g community is a great place where so many caring individuals are willing to help someone they’ve never even had the pleasure of sharing a cup of coffee.

When the car landed at Peter’s shop, we were there for a firsthand look at what atrocities Tony’s car had been subjected. From 20 feet away the ‘68 looked pretty respectable, but a closer look revealed that Peter and his team would have their work cut out. Obvious things like panel misalignment, poorly blocked panels resulting in uneven paint surfaces, and badly visible overspray were only the tip of the iceberg. As he looked deeper into the project, Peter brought to our attention many more troubling spots including sloppy seam sealer application, trunk seal gasket areas filled with wet sanding sludge and corrosion, and a bevy of badly-prepped surfaces. Venturing on, Peter discovered horrendous use of plastic filler, inner door corrosion, and poorly installed new rear quarter panels. Every time the team touched something on the car it went straight to Hell. It was as if the Devil himself was looming over the car.

As Peter says, “if our name is going to be associated with this car, then it will have to be done correctly.”

With so many areas to be addressed, we focused in on a few particular issues that will give you an idea of what to look for when you take on a project. So follow along as we shadow the team at Competition Specialties while they pull a do-over on some poorly-applied seam sealer, address door jambs that are screaming for justice, and part seas of mud that would leave even the most hardened body expert quivering in the corner.

Stay tuned to upcoming issues of Camaro Performers as we keep tabs on the progress of Project Karma. We have some revealing bodywork and paint tips that will be a huge help once you decide to “spruce up” your ride.