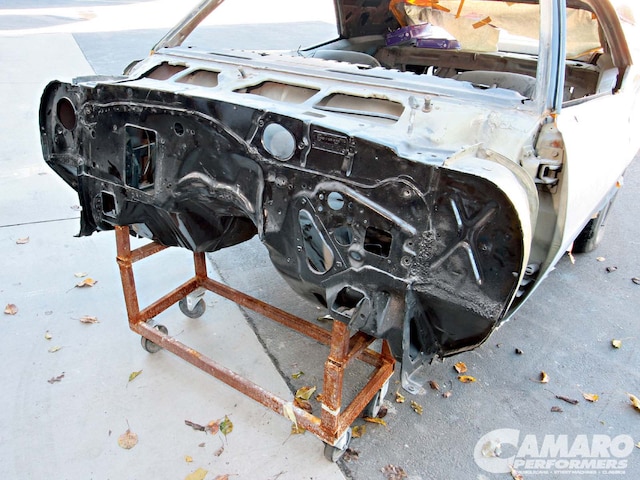 Let’s face it, looks matter. And while we like to focus on performance, there’s nothing wrong with making our rides look nice. When our cars rolled off the assembly line, they were considered basic modes of transportation with functionality being high on the priority list. After all, they weren’t building show cars back then any more than they are today. If you’d have told them that we’d be massaging them the way we do in ’09 they would have laughed in disbelief.

For designers, the firewall was all about function. It wasn’t put there to look pretty, it was simply a steel barrier between the engine bay and the passenger compartment. As such, it’s a bumpy, hole-filled mess that can greatly benefit from a little TLC.

In the case of our Project Track Rat, we want the engine bay to have a very clean and uncluttered look. The ’68 will have all the bells and whistles such as air conditioning and wipers, but that doesn’t mean we can’t tidy things up a bit. So, follow along as we give our functional firewall an aesthetic makeover.

In the lower area of the firewall there are two holes for accessing the cage nuts for the subframe bolts. They are important access points if you run into a rust issue and can’t get your subframe bolts out, or if rust breaks loose the cage holding the nut. Our car is in great shape and will lead the good life from now on. So, for an extra clean look, we decided to close them up. We also decided to ditch the fenderwell supports, so we ground down the factory pinch welds and removed the brackets.

Time to get to work with our 3M cutoff wheels. The object isn’t to remove the entire factory firewall, but instead to cutaway any part that protrudes out from the main plane of the bulkhead. We will also be removing the leading edge of the transmission tunnel to get a cleaner, truly flat look to the finished product.

Using a grinding disc, we ground down the metal flanges surrounding some of the holes. We also took most of the firewall down to bare metal. We will be using a metal adhesive to help bond the new firewall to the vintage steel, and it works best bare metal to bare metal.

Something that can’t deviate is the angle where the brake master cylinder mounts. Changing the angle or location of this would mean having to reengineer the brake system and that’s just more work for no gain. Most of these holes won’t be in our finished firewall. For example, our wiring will be different, so we won't need the fuse block hole, the car won’t run the factory parking brake system, and the hole for the steering column will only need to be the size of actual column.

We also took a minute to remove and save our VIN tag. In case you’re curious, our ’68’s body was built in the fourth week of December at the Van Nuys plant. Originally it was an Ash Gold V-8 coupe with black bucket seats and she was the 20,982nd ’68 Camaro produced.

After a couple hours of cutting, grinding, and cleaning, this was the result. As you can see most of the original firewall remains and will provide an excellent structure for which to secure the new firewall piece. As an added benefit, the new firewall will be stronger than what we started out with.

Using some heavy cardstock we then created a template as a guide for how we wanted the new firewall to look. Actually, we had this left over from another ’68 Camaro project. It worked on this car just fine with only minor variances.

With the Fusor starting to set up, we wasted no time getting the new firewall secured in place. Before applying the metal adhesive, we had clamped the panel in place and predrilled holes for our Cleko-loc fasteners.

We used a rotary shear to make the long, straight cuts quickly, then switched over to good ol’ snips for the detail work. When we got close, we put the panel in place to check fitment, then trimmed where needed. Removing too much material would just mean more work down the line.

Brad Dorschel, of Best Of Show Coach Works, then put the template on a large sheet of 16-gauge sheetmetal and traced out the shape with a marker.

Next, we broke out the Lord Fusor gun and a tube of their 108B metal adhesive. This is their medium compound and it has a 40 to 50 minute work time before setting up. One helpful aspect is that the material turns from gray to green as it sets up. Once set it’s proven to be stronger than a weld. We ran beads around the entire perimeter and every hole we could find. This would help seal the openings and firmly anchor the new sheet metal in place.

The new firewall is now permanently a part of Project Track Rat. In fact, once the Fusor sets up we couldn’t remove it if we wanted to.

After about an hour we started welding the perimeter of the new firewall. This further secured the panel to the car and gave us a nice edge to work with in the bodywork stage.

With a bead this pretty it’s almost a shame to grind it down. We also welded up the hack job that one of the previous owners did to the cowl when installing the aftermarket air conditioning.

Here you can see the shape of the panel we used to mate the new firewall to the factory transmission tunnel. We welded the panel in place, then body-worked it until the transition looked seamless.

Jon Peters then broke out the Sata gun and laid down three coats of Kustom Shop’s DTM primer/sealer (PN KEP505-GL, $73.95). It’s formulated for bare metal and will give us a good base to work with when we prep it for paint.

After welding, it was time to break out the grinder and go to town. Once done it will look like the Camaro came this way from the factory.

The finished firewall required almost zero bodywork to get ready for primer. The edges were massaged and holes from the Cleko fasteners were smoothed over as well with some U-Pol lightweight filler.

Mark this project as done. If you compare this to the before shot, the transformation from bumpy Swiss cheese is astonishing. When we start bolting on parts, we will cut the necessary holes for the various accessories. We will also seam-seal any gaps between the new and old firewalls from the inside of the car and lay down a few sheets of sound deadener. Total time for the project was about 15 hours with cost in materials well under two hundred bucks.