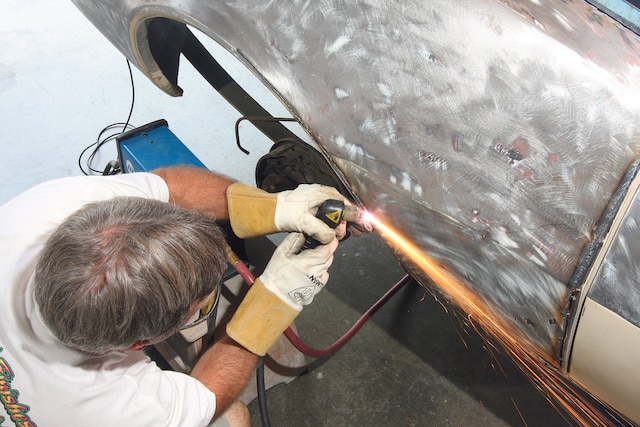 After laying eyes on the sketch drawn by artist Ben Hermance, we were real antsy to get our ’68, known as Project Track Rat, to look as it does on paper. So, getting from our rather raggedy point-A to the finely finished point-Z of the rendering was going to be anything but quick.

We shelled out $5,900 for our project car and could tell that even though it was fairly solid, it did have a few issues. It turned out that under the innocent-looking tan primer lurked more than a little bondo and a whole lot of bad workmanship. Oh well, such is hot rodding. We often have to fix the sins of the past as well as the ravages of Mother Nature. In fact, about the only way to skip having to deal with bodywork would have been to buy a car as cherry as the rendering. But, if that were the case we certainly wouldn’t have paid $5,900 for it. That’s the catch 22; pay up front, or pay over the course of time. The big benefit to doing the work ourselves, or having it done under our watch, is that we’ll know it was done right.


Replacing quarters is one of the trickier endeavors one can tackle when it comes to panel replacement. After all, a new fender or hood is a bolt-on deal and even a door isn’t very tough to replace. But, a quarter panel is a whole other animal that requires special tools, practiced technique, and most importantly, a good eye. Do it wrong and you will have wasted more than just the cash you spent on the parts. You will have squandered something even more precious; time.


We know our limitations so we took our ’68 project car over to the crew at Best Of Show Coach Works in San Marcos, CA, to handle the panel transplant surgery. This way we know it will get done right the first time. While it’s hard to translate over thirty hours of work into a few pages, this should give you an idea of what’s involved and if it’s something you want to try and tackle yourself.