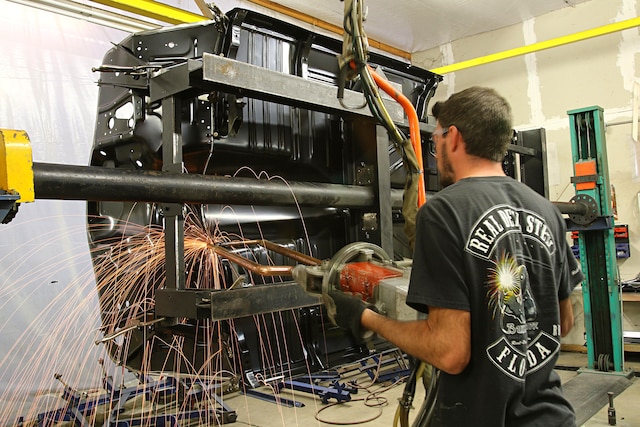 Starting a new project is an exciting time; even for those of us who do it on a regular basis. We've wanted to do a Tri-Five for one of our Week To Wicked builds so when that concept gelled into reality we were nearly doing cartwheels. Then reality set in. It turns out that finding a suitable starter car was harder than expected. All the really clean cars cost a bundle (hey, even we have a budget to adhere to) and we felt a bit guilty ripping apart a survivor car to modify. The ones with really clean paint were already full of aftermarket parts we really didn't need and the rest were either overpriced or rotted-out and overpriced.

And then we were inspired to go another route. As Joe Whitaker of Real Deal Steel (RDS) in Florida explained, "Of the millions of Tri-Five Chevys built by GM, most are either gone, restored already, too expensive, too rough, or are body styles (e.g., four-doors) that aren't as desirable. That's where we come in with our brand-new steel bodies. Assembled here in the U.S., we use a precision assembly fixture and industrial spot welders in much the same way GM assembled these cars in the '50s." By going this route we would have a clean platform to get ready for our transformation. Of course, stitching together a complete car is no easy task. As Joe explained, "The build time for a complete body at RDS is six to seven days. We build anything from just the body skeleton or a race car body with no floors, firewall, or trunk floor all the way up to a complete body with all the sheetmetal, including the front end. We take extra time to eliminate the infamous Tri-Five quarter-panel 'bulge' and we're very fussy about door and trunk gaps, as well as glass fitment. Every car, even after fixture assembly, receives the test-fit of a windshield and back glass to verify accuracy. In addition to the hardtop, sedan, and convertible Tri-Five bodies, RDS also assembles 1967-'69 Camaro coupes and 1966-'67 Chevy II Nova bodies. All are officially licensed by GM." Of course, we don't have a donor car, but Joe explained that registration isn't an issue. "We don't provide a serial number or VIN, but titling and registering in all states is relatively easy given the actions of the SEMA Action Network (SAN) to allow registration of these new bodies as the actual year they represent. So, you can register a new RDS '55 Chevy as a '55 Chevy!" relayed Joe.

Of course, RDS had us covered on the skilled labor side of the ledger, but to make this happen they needed excellent sheetmetal. Enter Golden Star Classic Auto Parts. Golden Star turns out very accurate parts, which is a good thing because original parts are either impossible to find or will cost one or two internal organs to purchase. And besides, we've seen some iffy "original" panels made on worn-out tooling. Golden Star uses a complicated process to make new molds and tooling so that we end up with parts that are oftentimes better than what the factory was churning out over a half century ago, with crisper lines and smoother curves.

Yeah, we can hear you now, "Hey, if it takes a week to just build this body how can this be a Week To Wicked project?" Well, here's the deal. We typically start these projects with a done and running car and then spend a week turning it from blah to bitchin. This time, instead to starting with someone's done or stalled project, we're getting the car ready for our week of wrenching. This way we won't have any surprises and we know the starting point will be rock solid. The plan is that Real Deal Steel will build us the body and AA Customs will do the final bodywork and lay down the paint. Once back at our MotorTrend Tech Center in California we'll have seven days to turn the painted body into a badass ride.

But for now let's take a look at how Real Deal Steel turns a huge stack of Golden Star Classic Auto Parts sheetmetal into a 1955 Chevy sedan.

The '55 body starts with placing the Golden Star Classic Auto Parts floor onto a fixture that is attached to a rotary lift. The rotary lift makes getting to all of the areas to weld easier and the fixture jig makes sure everything lines up.

Most of the pieces are resistance spot-welded with industrial, water-cooled 220V spot welders, just like they did back in the '50s at GM. The spot welds look "right" and it's a system that's withstood the test of time. Here, Jordan Sechrest attaches the trunk floor to the main floor section.

Real Deal Steel (RDS) offers a few options, with one of the more popular ones being mini-tubs. Yep, for around $1,250 they can mod the body to accept an 11-inch wide wheel with a 335mm tire. This is a ton cheaper than taking a done body to a shop to have it done. After marking the floor with a template, the section was removed.

Next up was the panel that incorporates the toeboards and firewall. It's critical that these three pieces (firewall, main floor, and trunk floor) are right since the rest of the car will build off of these.

Making sure that all the pieces are in exactly the right place is the job of the main fixture jig. These take around six months to develop using unmolested cars. The jig uses factory holes to locate the various panels and hold them in proper relation to one another. Could you assemble a complete car without the jig? Yeah, but it would be a nightmare trying to make sure all the parts are precisely located. Here you can see the jig locating the side cowls by using the door hinge mounts.

With the side cowls in place it was time to attach the upper cowl panel.

In places the pinch welder won't reach, or in areas that need to be stitch welded, RDS MIG welds.

The inner rear quarters come from Golden Star with the wider inner mini-tubs already installed. This saves a ton of time, which is another reason their add-on for mini-tubs is so reasonable. The inners were located with the jig then welded to the floor sections.

This is where the rotary lift makes the whole process easier.

With the rear inners installed it was time to start cutting and trimming the rockers. They also test-fit the rear outer quarters to make sure everything is ending up where it should be. Some of the parts, like this rocker from Golden Star, come coated in a silver weld-through primer.

RDS has many key measurements on hand, taken from original survivor cars, so they can check parts that aren't located by the jig fixture. These areas around the door are critical to having a good door gap at the end of the build, so everything is double-checked. It's also why one of these bodies takes six to seven days to complete.

Before welding, the inner roof structure was gently persuaded until the distance was exactly where it needed to be for the door to fit right.

After that measurement was spot on, Jordan went ahead and hung the doors, which come from Golden Star as pre-assembled units.

The outer quarters were then temporarily hung so the door gaps could be checked and any adjustments made. This is a long process of "test-fit, adjust, install, repeat" that we've condensed into one photo.

Once the doors were right it was time to install the rear package shelf, which extends all the way to the trunk weatherstrip channel. The weatherstrip channel is an area of the car that takes a lot of time to get right since the channel is made up of six separate panels that all have to mate together correctly.

To ensure the trunk opening is correct, the trunk lid was bolted in place.

During the build process, OE trim pieces—such as this taillight bezel—are put in place to make sure everything is exactly the way it should be.

After hours of trimming, adjusting, and persuading, the trunk fits the opening better than it did from the factory.

With everything right, the rear quarters were removed one last time so the inner wheelhouse seals could be put in place.

These seals are an important part since they close up the gap between the inner wheelhouse and the outer quarter. Fifty years ago, the factory attached these with steel staples, but today RDS uses a modern adhesive.

And with that the quarters were put back on for the last time and fully welded in place.

The roof edges are another place where modern adhesives are used. The SEM panel bond is as strong as a weld and is used extensively in modern cars.

The roof was installed and then a bunch of locking pliers were used to secure the edges while the adhesive cured. To keep everything solid, a 1/4-inch rod was used in the drip channel to give the pliers a solid foundation and make sure the clamping force was spread evenly along the entire roof line. The front and rear edges of the roof were spot welded to the roof support framework.

Once the car was fully assembled there were still many hours of welding left to do. The spot welders make really nice work of areas like the doorjambs.

One of the last pieces to be welded to the car was the dash. You can also spy the enlarged trans tunnel upgrade supplied by Hot Rod Dynamics. This upgrade runs $699 installed and replaces the small trans tunnel in the '55 with one large enough to easily accommodate a modern transmission, such as a 4L65E, 4L80E, or even a TREMEC Magnum six-speed. Considering that the price includes parts and labor it's a no-brainer if you will be putting a modern driveline under your Tri-Five.

The body for our '55 is just about done with only a few more bits to weld on. Notice the smoothed out and recessed firewall? Yeah, that isn't factory. It's another option supplied by Hot Rod Dynamics and installed by RDS. The 16-gauge firewall runs $1,199 fully installed and has a deep 4-inch recess for all big-block and LS installs. The rounded corners on the recess look way better than other options we've seen and the firewall allows the use of modern items, such as Vintage Air Gen IV A/C systems and Raingear wiper kits.

Pro Tips on How to Apply Rally Stripes on a 1968 Camaro » Read More
Upgrade the power of your Gen I small-block Chevy » Read More
Week To Wicked: Did We Finish As Planned? - Day Five Build Recap