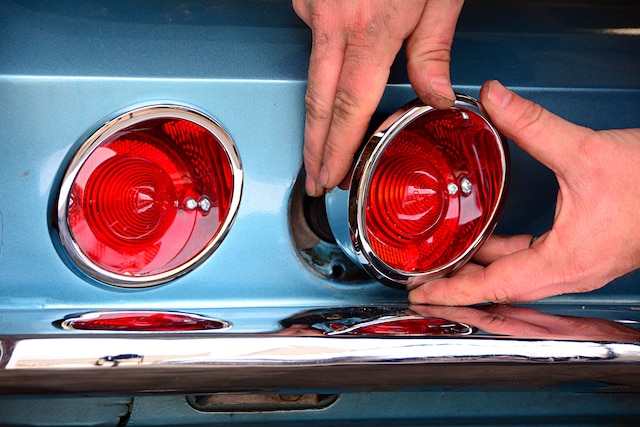 Driving a classic Corvette on the same roads as texting teenagers and distracted soccer moms is scary enough, but we recently ran into an intermittent problem that could've resulted in disaster. Two out of the four brake lights on our 1964 Corvette coupe randomly stopped working so we checked them out in the garage, and they worked perfectly. We hit the road again and a friend passing the other way called to let us know that half of our brake lights were out. Today's drivers are accustomed to seeing the giant, eye-level LED taillights on modern cars, so taking away two tiny, round taillights really hurt our chances of being seen. After some head scratching and wire wiggling, we decided to replace the taillight assemblies as our first course of action. Our coupe is a little rough around the edges so this also served as motivation to freshen up the car's appearance with some new housings and lenses.

We set aside a few hours to tackle the installation. You might be thinking that taillights should be rather simple, and you'd be right if the body was lifted away from the frame. However, on a typical 1963-'67 Corvette, you'll have to work around several objects to reach the backside of the housings. Given our experience with this installation, the ideal time to replace the taillight assemblies is when the spare tire carrier, exhaust and gas tank is already removed from your car. Lucky for us, we already had the spare tire carrier and rear portion of the exhaust removed for some rear suspension work so the timing worked out nicely. It is possible to perform the taillight swap with all of those items in place, but space is very tight.

As we disassembled our car, we found the problem that was causing our intermittent lighting issue. The two taillight housings on the passenger side had separated from the bulb socket, causing them to lose connection. These two items are originally riveted together, and they must've shaken loose over the years to create this problem. These cars already suffer from poor grounds, due to the fiberglass body, and an issue like this only amplifies an electrical gremlin. The new taillight assemblies from Zip Products solved our problem and really woke up the rear section of our tired Corvette project. Our concerns of being rear-ended by a distracted driver aren't totally absolved, but with four functioning brake lights, we're doing our part to be seen. Vette

Our 1964 C2 Corvette project car was repainted in the 1980s, but it did not receive a full restoration. These taillight housings and lenses are certainly showing their age.

Oddly enough, most of the lenses were only held in place with one screw, and all four of them were cracked. You could say this was "out of sight, out of mind," but it was a truly neglected part of our project car.

It's a tight fit with the gas tank and rear crossmember in place, but we reached way up into the rear body section to access the back of the taillight assembly. The taillight assemblies are held in place with 7/16-inch "speed nuts," which typically loosen easily.

The upper stud has a ground wire attached to it. The die-cast metal housings bolt to a fiberglass bucket, so as you can imagine, the ground surface can be a source of problems. When the assemblies are removed, be sure to clean the ring terminals with some sandpaper.

It took some pressure from the backside, but our original housings finally came out of their longtime residence. Since our car had an intermittent problem, we inspected each housing for potential issues.

In our case, the taillight housings had been in place for more than 30 years so quite a bit of dirt had collected in the bucket. This is a good time to clean out the buckets with some spray detailer.

As we made our way across the rear of the car, we found the source of our problem. The bulb socket is riveted to the taillight housing, allowing each assembly to be grounded. Two of our taillight housings had separated from its socket, causing it to lose connection.

A bit of online research led us to Zip Products, and we chose the easiest solution to our taillight dilemma. We opted for the complete taillight assembly set (PN L-447). Zip also offers an LED taillight kit for 1963-'67 Corvettes if you want even better visibility.

New bulbs and cork lens gaskets are in place, and these assemblies come out of the box ready for installation. There is no practical reason to disassemble the Zip taillight assemblies but we wanted to show you what was behind the lenses.

The backside of the taillight assembly features a rubber gasket, which sandwiches between the housing and the fiberglass bucket. Notice the original style smooth studs. The included, new speed nuts cut their own threads upon installation.

Before we reassemble the car with its new taillight assemblies; we clean the connections and ground terminals with a piece of 220-grit sandpaper.

The original connector slides in and twists to lock into place. Be sure to slide the rubber accordion boot into place to protect the connection. If your boots are torn or hardened from age, Zip sells new ones (PN E-561).

Before sliding the taillights into their respective homes, we install the thread-cutting nuts onto the new studs, which allows them to get started easier once the housings are slid into place. All four housings have different contours, so now would be a good time to find the inboard and outboard housings for each side.

Space is very limited so you may find yourself guessing at the location of the nut and stud while under the car. With this in mind, we taped the housing to the body to keep it from trying to jump out as we got the nuts started.

Remember to slide the ground terminal onto the upper stud and then install the two nuts for each taillight assembly. We used a 7/16-inch socket, an assortment of extensions and a 3/8-inch ratchet to finish the job.

The moment of truth involved reconnecting the battery and pulling out on the headlight switch. All four taillights came to life, so we tested the turn signals and brake lights to make sure we had solved our intermittent lighting issue.

Get Rid of Your Antiquated V-Belt With an Affordable Serpentine Drive System » Read More
Pump Gas 382 Stroker Puts Out 780 hp on the Dyno » Read More
Week To Wicked: Did We Finish As Planned? - Day Five Build Recap