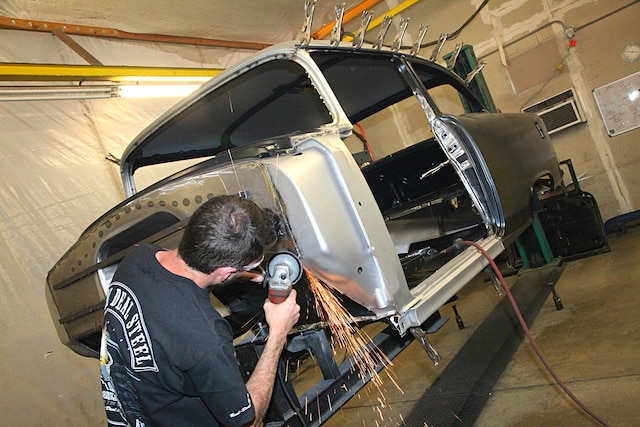 Real Deal Steel (RDS), based in Sanford, Florida, was one of the first aftermarket companies to offer brand new Tri-Five bodies. As the demand grew and feedback came in from customers, RDS recognized there was a need for more options on the new Tri-Five bodies to help reduce the amount of time customers/builders spent modifying their cars. They also found that some parts, such as mini-tubs, were much easier to add during the body-building phase, which let them offer options that would save their customers time and cash in the long run.

Installing a late-model engine and transmission into a Tri-Five Chevy has become even easier thanks to RDS's new 4-inch recessed firewall and enlarged transmission tunnel.

A big factor in offering these parts has been the increased popularity of using the 6L80 series of six-speed automatics in builds. The increasing supply of salvage transmissions from trucks has helped lower prices to make this a more affordable option, along with most salvage engines sourced from trucks are being bought with their factory transmission as part of the package. While the stock Tri-Five transmission tunnel has a lot of space, the 6L80 can't be fitted without some tunnel modifications due to its larger width and length compared with the earlier 4L series automatics.

Alongside that, the demand for a new firewall insert has increased. The factory firewall has a lot of unnecessary holes for modern builds that take builders time to patch and weld up to achieve the desired look. In addition, the factory firewall recess presents fitment issues for LS and LT series engines, similar to those encountered with big-block installs in the past.

Cofounder of Real Deal Steel and longtime Tri-Five expert Joe Whittaker explains how these things came together. "The firewall was already available from Hot Rod Dynamics (HRD) and we began offering it because our customers wanted an attractive custom firewall. For years, customers have asked increasingly for a custom transmission tunnel to accommodate the larger late-model GM automatic and manual transmissions common with LS swaps. We asked Joe Lutz from HRD to work with us on designing a piece we could insert with minimal fuss that would expand the factory tunnel and work with the recessed firewall piece. After three years of test-fitting and fine-tuning, he finally got all the dimensions figured out to give customers what they wanted."

The new pieces are made from 16-gauge steel to properly match up with the existing body panels. The recessed firewall is a modern affair and not compatible with the factory heater box or wiper motor. This is not really an issue, though, since most people ditch the factory pieces anyway for a modern wiper setup like those available from Raingear and aftermarket climate systems like those from companies like Vintage Air.

The new firewall gives 4.125 inches of uniform firewall recess depth, allowing for easy fitment of LS/LT engines with the coil packs mounted on the valve covers and more clearance for exhaust headers. It also allows for builders to set the engine back farther in the engine compartment for more clearance between the engine and radiator, and improve the car's weight distribution. The transmission tunnel insert eliminates all the previous clearance issues for late-model automatics (and manuals) so the drivetrain can be set in place without having to break out the hammers and pound on sheetmetal.

Customers ordering a new RDS Tri-Five body can have these pieces installed at the factory (as we did with our new '55 project) or they can be purchased separately by anyone working on an original body that wants to make the same modifications. Having these pieces installed by RDS when building the body is far cheaper than having a shop install the parts later on.

The factory Tri-Five firewall, in this case a reproduction from Golden Star Classic Auto Parts, was well designed for its day, but in the modern world presents issues on both the functional and aesthetic fronts. Today, builders want a clean firewall that is uniform and easy to work with. Many of the factory holes aren't necessary with aftermarket upgrades, as well.

The new Hot Rod Dynamics 4-inch recessed smoothie firewall, offered by Real Deal Steel (RDS), was designed to give builders the firewall they wanted without having to spend hours cutting and fabricating to get the desired result. The new firewall is devoid of all holes so the builder has a clean starting point for steering, brake, and other upgrades that involve the firewall.

When a new RDS Tri-Five body is built, it receives a stock firewall. If a customer opts for the new recessed smoothie firewall, RDS will install it as part of the build, which saves cash compared to doing it later on. The first step is measuring for the cuts to remove the stock firewall. Even though they've done this multiple times, the RDS crew always measures and checks like it's the first install they've done to be sure everything is done properly.

Next is drilling the spot welds holding the stock firewall brace in place so it can be removed entirely.

The entire firewall brace and body mount is removed to make way for the new firewall. It will be modified before it is reinstallation later.

Once all the measurements/cut marks are made on the firewall, the cutoff wheel goes to work.

After careful cutting and trimming, this is the end result. This is also much easier to do before the dash is installed in the car.

The new recessed smoothie firewall is set in place temporarily so the final measurements and marks can be made to trim it to fit precisely, both the new firewall itself and the remaining part of the original firewall. To keep the panel straight during welding, two pieces of square tube steel are tacked to the firewall.

The cutoff wheel goes back to work doing the final trimming on the remaining OE firewall section.

The new firewall is set in place temporarily with sheetmetal screws so it can be marked up for final cutting. On the inside you can really see how much of a difference depth-wise the new recessed unit makes.

The new piece receives final trimming. This part shows the advantages of having RDS install this option as a new body is being built. Customers can opt to do the install themselves and have RDS complete a new body to factory spec and include the new firewall as a separate piece. But having RDS handle it saves numerous labor hours (and money if a shop is building the car) and results in a precise fit that is ready for the end builder to work with. No second-guessing, no uncertainties.

With everything set, all the EDP coating is removed in preparation for final welding. While the rest of the body uses the spot-welding process for assembly to factory spec, the new firewall (and transmission tunnel) pieces are MIG welded in.

The stich welding process is done patiently to make sure the metal doesn't get too hot and start to warp and negatively affect fitment and the final appearance.

Once all the welding is complete, the welds are smoothed and blended so once primer and paint are applied none of the seams will be noticeable.

The new tunnel insert is set in place for marking up where to cut. You'll notice the cut marks are leaving quite a bit of extra material. This is deliberate to aid in fitment of the new insert and aid when it is welded in place. If you cut away too much it just makes for a lot of unnecessary work.

Sparks fly and the factory-spec section of the transmission tunnel goes into the scrap bin.

Poof. It's gone. A testament to the Tri-Five design is how adaptable it has proven to be over the decades for modifications. This is one of the many reasons these cars are still popular today with builders and enthusiasts.

On the left is the new trans tunnel piece and on the right the factory-spec piece. When it comes to width, the new RDS transmission tunnel insert provides for a lot more room to accommodate the girth of the newer six-speed automatic transmissions. The new piece is also designed to carry that extra width farther back, taking into account the extra length of the 4L and 6L series automatics, as well as larger six-speed automatics.

This is where the extra material left in place comes in handy. Sheetmetal screws are used to secure the tunnel insert in place and make sure it doesn't move while the welding process takes place. Both pieces of metal are pulled tight for a better seam to weld them together.

As with the firewall, the transmission tunnel insert is MIG welded in place slowly to avoid overheating and warping. Once all the welds are done they'll be smoothed out and any remaining excess metal on the underside of the tunnel will be trimmed away.

After several hours of welding the new, larger trans tunnel is in place and mated to the new, smoothed and recessed firewall. The new transmission tunnel runs around $699 fully installed and ready to rock.

With all the work done on the firewall and transmission tunnel, the firewall brace/body mount can be reinstalled. The upper half is trimmed off (unnecessary now and defeats the purpose of the concept of a smooth, clean firewall) and is then rewelded onto the firewall and footwell.

Minus the final trim on the transmission tunnel section of the new firewall insert (back to where you see the visible welding line), this is the end result. The builder can now mount the master cylinder and hood hinges wherever desired and mark out a new hole for the steering column to pass through, instead of the large factory hole for the factory steering column. Holes for climate control and wiring can now also be set by the builder and made easier to conceal. The new firewall isn't designed to work with the factory windshield wiper motor, but since most builders are going with an aftermarket wiper motor or eliminating the system entirely, this isn't a problem. The firewall runs $1,199 installed, which is considerably less expensive than having a shop do this later on.

With the new Real Deal Steel recessed smoothie firewall you have a depth of 4.125 inches. And since the new recess is uniform in shape, you have those 4.125 inches across the entire width of the recess. If you're fitting an LS or LT engine, you have more room to clear the rear coil packs on the valve covers. If you're installing an old-school big-block, you have plenty of room to clear both the big-block's extra girth and distributor. For any engine series (well, almost any) you have more room and an easier path to set the engine back in the chassis to improve weight distribution and balance for improved handling.

We set the dash assembly in place to show how things look from the inside. The new firewall won't interfere with mounting the usual things behind the dash (wiring harness, climate system, stereo, etc.) and in some instances will even make those installations easier.

Proper body preparation and spray technique is the key to getting a great looking paintjob on any car.