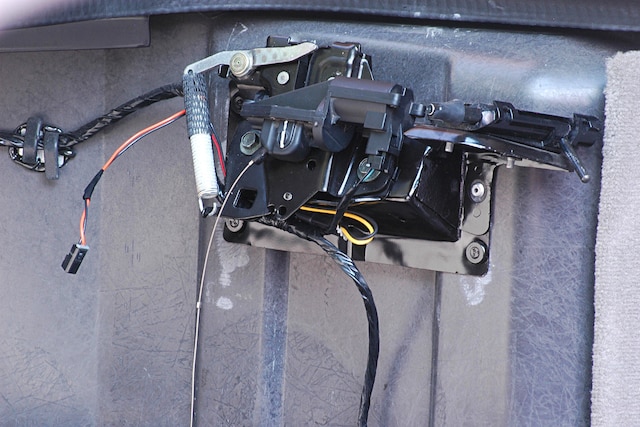 The C5 Corvette is the performance bargain of the century. No other car we know of does what it does at the same price point, and it generally requires little to no restoration work to be serviceable, even for those of us who daily drive one. We’re not saying it’s impossible to daily drive a chrome bumper “shark” without constant wrenching, but it didn’t work out well for us. Even so, the newest of the C5s are about 15 years old, with the earlier cars over 20. While a modicum of washing and a minimum of bad driving will keep the exterior looking like new, a couple decades’ use will often show pretty badly on the interior. Some of this is cosmetic: the door panel access plugs that one day you find on your floorboard, the split rubber bumper tips on the roof panel storage latch, all the way to that buzzing sound you ignore until the rear hatch won’t open at all.

After our 1998 Sebring Silver coupe (aka “La Bala”) starting racking up quite a list of worn or broken interior pieces, we decided it was time to start checking them off to keep her looking (and working) like a Corvette should. Here, we’ll cover common problems in the interior and back hatch, returning another day for that annoying seat problem where the car stops before you do.

The most pressing problem we faced was the back hatch. After a couple months of hearing an ominous buzzing every time we hit the hatch release, we were finally left with just the buzzing, as the passenger-side latch stopped working altogether. For us, this meant replacing the entire mechanism, including the solenoid, an assembly that runs just under $300. We bought a new OEM unit from Eckler’s Corvette. The actuator itself, however, is a $40 part and would have solved the problem. In retrospect, that would have been a better choice, but there’s probably some wisdom in replacing it all at the same time. At least that’s what we’ll tell ourselves.

One of the benefits of the C5 is the tremendous amount of luggage room it has, so trying to get stuff into the rear of the car via the front (a la the early C3) because the hatch won’t open seriously limits the storage area. That’s exactly the route you’ll have to take to get the hatch open for repair, though: slither over or around the seats and remove the cargo compartment cover on whatever side has the broken latch. With that panel out of the way, look for the narrow cable running down into the cargo compartment from behind the carpeted interior panel. Pulling the cable will release the latch, freeing the hatch to open upward. (It’s probably smart to hit the release button on the dash or remote first so the other side is already free.)

The next order of business is removing the interior panel to get access to the latch. Once the cargo net retaining clip has been removed, you can start to work the panel free. When you can swing the bottom out a little, you’ll need to pull the top downwards in order to free it since there’s a metal clip on top of the trim piece that holds it in place. If you’re swapping out the entire latch, as we did, you’ll remove the old one and replace as per the accompanying photos. The holes through which the latch is mounted to the body are square and large enough to allow some adjustment for height. When you’re installing the new latch, you’ll want to try to match the way the original latch was installed, for both aesthetics and function. The hatch will look silly if it’s too low or too high, but you may find that moving it too much in the desired direction may put the hatch in a bind where it will no longer open. Such are the vagaries of the Corvette: get it as close as you can and still have it work.

If you’re only swapping the actuator, though, there’s no need to remove the rest of the assembly: it’s held on by a pair of 8mm bolts that are conveniently pointed toward the rear of the car. Loosen them, remove the old actuator and put in the new one, being careful to orient its rotating tab in the matching slot in the latch. In either case, make sure you hang the emergency release cable down into the cargo compartment within reach. Vette

1. The first step in fixing a broken rear hatch mechanism is getting the hatch open again. Each latch (there’s one on either side of the car) has a cable that drops down into the rear cargo compartment below it. Pulling the cable will release the latch on that side of the car.

2. After unhooking the cargo net (if your car has one), you’ll need to unscrew the retaining clip from its bolt so the carpet-covered panel covering the latch mechanism can be removed. After pulling the panel off this bolt, extend the roof panel storage latch outwards and free the top of the panel, then work it forward and out.

3. To remove the panel the courtesy light attached to it will need to be disconnected by using either a small screwdriver or a knife blade to pry up the white retainer where it holds the black plug in place. Note the blue bulb holder; we’ll come back to that in a minute.

4. The latch, showing one of its two mounting bolts. Note the hole in the mounting bracket is square and much larger than the bolt itself so there’s some adjustment in the height of the latch. If you’re replacing the entire assembly, you’ll want to install the new one as close as possible to where the old one was bolted in place. Helpfully, the washer has left a telltale mark at the bottom of the hole.

5. To remove the old assembly, two things will need to be unplugged: a two wire (black and blue) connector that plugs into the actuator and powers it and this connector located underneath the latch that connects to the hatch ajar switch. Note the grooved grey connector mount: you’ll need to slide the connector off this mount to disconnect it, and back on during reassembly.

6. Both unplugged connectors shown after the latch has been removed; the blue/black one has much more length to work with. Also note that, just like the courtesy light, the connectors have retaining tabs that will have to be carefully pried out of the way in order to unplug them.

7. The OEM replacement latch we bought from Eckler’s (left) shown with the part we removed from the car (right). Although the wiring at first appears to be different, the wiring connects with the same wires in the car’s harness and functions correctly. Although we replaced the passenger-side latch, there’s no right/left side latch. Both the driver’s and passenger’s side use identical latches.

8. The new latch bolted into place and with both electrical connectors plugged in. In this photo, you can see both mounting bolts, one on either side.

9. Once the latch is bolted firmly in place, close the rear hatch to check for panel alignment and adjust as needed. Be warned, though, that it is possible to get the hatch in a bind where it will not pop open, so perfect alignment may not be possible.

10. If you’re only replacing the actuator, you won’t need to worry about aligning the hatch unless you just want to. There’s only one electrical connection to be made, and that’s unplugging the two-wire blue/black connector on the side from the old one and back into the new one. The tab, which is on the lower right near the cable, will need to be inserted into its matching slot in the latch mechanism.

11. The actuator is held in place by these two 8mm bolts. The latch bracket is shown here from the rear. While it will be bolted into place in the car (and doesn’t need to be removed to swap actuators) this is the direction from which you’ll see the two mounting bolts. Remove and replace, unplug and re-plug.

12. Since one of our courtesy bulbs was burned out anyway, we took the opportunity to replace both sides with Sylvania LEDs. Replacement is simple; unplug the old bulb and plug in the new. LEDs have polarity, however, which means that unlike a bulb, one of the two contacts is positive and the other negative. If yours doesn’t light up, remove the bulb holder, rotate 180 degrees and reinstall.

13. And here’s the rear courtesy light after being replaced with an LED we purchased from the local O’Reilly. LEDs draw less power, last longer and produce a cleaner, whiter light.

14. Since the roof panel storage latch pokes through the same interior panel that covers the hatch latch, you’ll be dealing with it, too. Due to the slot into which the handle fits when locked inwards, it’s easier to remove and install the panel with the latch extended. Also note the sad condition of the rubber bumper.

15. Corvette Central supplied replacement bumper tips; installation is as easy to pulling off the old one and pushing the new one down into place. It may take some force, but make sure to get it seated down as far as it will go.

16. few interior parts on the C5 that have a bad habit of eventually just falling out, leaving behind an ugly hole … and the possibility that someone will stick the ignition key into it.

17. These narrow mounting tabs are the culprits. While supergluing them back into place may buy you a month or two, it won’t last forever. We replaced this one with a new piece from Corvette Central that has stronger, gusseted mounting tabs and should last a lot longer.

18. Not all access plugs are created equal. The original is in the center, with a Corvette Central reproduction on the right and a different repro on the left that looks considerably different than the original part. No doubt it’s serviceable, but if you want your car to look original, we’d pick the one on the right.

19. The plug has a single tab in the middle that’s oriented downwards. Orient it correctly and press inwards until it snaps into place, filling the unsightly hole. Done.

Larry Gibson isn't afraid of going fast in his nitrous-assisted 1998 Chevy Corvette. After all, he's used to brakeneck speeds. Click here for more details or check out the May issue of Vette Magazine.

Check out this 1998 Chevrolet COrvette that has a 427cid motor, LS1 heads, and more. Check it out only at www.gmhightechperformance.com, the official website for GM High-Tech Performance Magazine!