Replacing the Nose on Your C1 Corvette 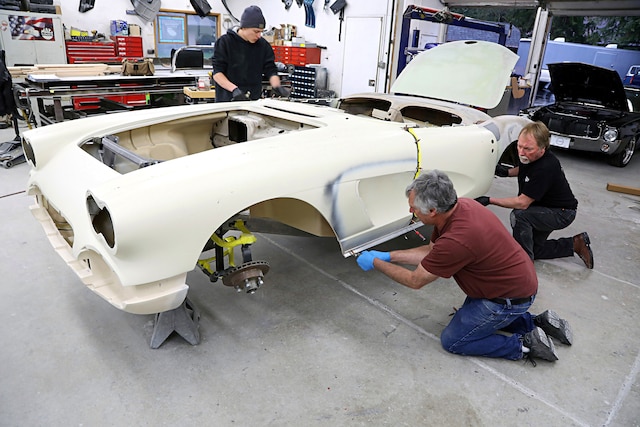 When I was a kid I was pretty good at just about everything I tried. But there was one thing I excelled at: taking things apart.

Oh come on, you know you did it, too. There was something satisfying about sitting on the garage floor with parts strewn about you. That feeling you get when you wonder if you can put it all back together again, man, what a rush.

I don’t get that sort of opportunity now that I’m middle aged. So I was extra excited just before I left Street Rods by Denny. Screw unbolting thrift-store bicycles; cutting C1 Corvettes is where it’s at! Joking aside, tearing apart a Corvette, pretty much any Corvette, is fairly intimidating. But after watching Josh Sanders and Doug Isbell carve that ’59 apart gave me hope for the future that this car would, in fact, go back together.

Assembly is actually simple. As revealed in the first entry, assembly is basically a seemingly endless loop of mocking the part on the body, pinpointing the interference, removing the part to correct those issues, and mocking the part again to check the fit. Unless you make a jig for a cherry-picker, it’s really a two-person job. But doing the work on this end makes the last part of the job, actually bonding the nose to the car, almost shockingly easy.

Just understand that an accurate fit is absolutely critical. The panel-bonding adhesive has a relatively short pot life, so once you mix it you have to get crackin’. And there’s no time left for fixing issues during the bonding process. It’s a get-in-and-get-out kinda job that’s best served with at least three people, preferably four. It’s the most stressful part of the job, but it’s also the fastest; like 15 minutes from start to finish, a timeline dictated by the nature of the panel-bonding adhesive. In fact, it’s a good idea to do this on a cool morning, as the Street Rods by Denny crew did. Chemical reactions depend on temperature and lower temperatures delay cure time.

What adhesive you use is fairly subjective. Many authorities—including Jerry Geiszler from Corvette Image and Darrold Elhard, Denny’s Corvette guru—recommend using a polyester-based adhesive. There are epoxy-based adhesives that are actually stronger than polyester-based materials; however, the polyester-based material has a secondary benefit: it can double as a filler to build up a surface if a panel falls a touch too short. Which is a rule rather than an exception when working with handbuilt vehicles, as we noted in the first installment.

Polyester-based fillers are made with the same resins used in the rest of the body (resin usually with milled glass fibers). So they have similar expansion rates as the body panels. That means they’re more likely to shrink and swell with the bonded materials.

Darrold swears by a Bondo-branded material that 3M refers to as resin jelly. He’s used it for decades and maintains that it does everything he needs and hasn’t failed him. It has an Ortho base. Jerry has a little more scientific approach. He worked with a manufacturer to come up with a similar adhesive/filler that has an Iso base.

Most manufacturers like 3M/Bondo use the Ortho formulation because it’s strong and relatively inexpensive as resins go. But Iso sacrifices a little bit of budget for a fair bit more strength. Case in point, Ortho’s tensile strength is around 8,000 psi whereas Iso’s tensile comes in a little more than 37 percent stronger at 11,000 psi. And that’s not the end of it, either; Iso resins tend to be tougher—as in able to bend or endure shock loads more without fracturing.

Ortho resins tend to be rather brittle by comparison. Simply for its greater strength and durability, Iso is the resin of choice for mold-makers, hence the nickname tooling resin. Yes, Iso-formulated materials cost a little more and, no, they’re not always available at your local auto-body supply house. But depending on your value system, long-term performance may outweigh price and availability.

After watching this car go back together I’m here to tell you that, for once, assembly is a lot more fun than disassembly. Yes it’s a lot of work. But equipped with the right tools, the space, the time, and the patience, there’s no reason why even a well-trained amateur can’t successfully swap the nose on a C1 Corvette.

1. Bonding begins with a nose that fits perfectly and has plenty of fixture points to stabilize its individual components. If the car doesn’t look like it’s ready for body and paint, it’s not ready for bonding. Everything must fit.

2. All trimmed up, the mounting points around the body look pristine, much how they looked 60 years ago. This is the goal; what’s here right now will stay here for the life of the car, so work carefully.

3. Josh Sanders and Doug Isbell went about double-checking mounting points and ensuring that every piece was in place. Once the body goes together there’s little chance of getting missing brackets in place.

4. There are a number of sub-assemblies, like this cowl bracket, that get sandwiched between the nose and body. But this bracket interfered with the cowl vent so Josh held it out of the way with some bungee cords. Once the nose goes on, the cords come off and the bracket snaps in place.

5. And naturally everything goes on the nose, like this cowl vent and its linkage.

6. Keeping the bonding agent off of some parts is every bit as important as getting it on others. After all, it’s tough to open a door if it’s glued to the jamb! Go around and mask components that risk getting an unintended swipe of adhesive.

7. Even though the nose fit perfectly, the crew test-ran the fitting sequence several times to reveal any potential hang-ups. They got it down to specific steps to ensure the nose goes on without grazing any of the panel adhesive.

8. The crew used two, 2-pound, 8-ounce cans of fresh adhesive to attach the nose. A good deal of the adhesive will squeeze out of the seams but it’s quite necessary in areas where the inner structure doesn’t quite meet the nose.

9. Darrold and Josh scooped almost all of the adhesive on mixing boards and mixed based on the instructions. Reserve a little bit for attaching brackets and such that go on after the nose.

10. Josh, Doug, Darrold and Denny laid on the bonding agent at approximately 1/4-inch thick. Sometimes the fit is quite loose and it’s better to have excess squeeze out than not have enough to achieve a full bond. There’s no going back to put in more once it cures.

11. The crew hoisted the nose on one last time, each person tending to their respective area. Resist the urge to rush; you have time to work thoughtfully.

12. Once the nose dropped in place, the crew attached it with the fixtures and panel fasteners that held it in place during the fitting process.

13. Fitting the nose displaces all of the excess bonding agent. Do yourself a giant favor and feather out the excess before it cures. It bears mention that it pays dividends to pay attention and study the various spots before you tear the car apart. That way you can reproduce the factory look.

14. Once he pulled out the gross excess, Josh clamped the various panels together. The little bit of adhesive that oozes out doesn’t pose any threat.

15. With the nose firmly attached, the various substructures can go in. Cool working temperatures extends the working time, so if you act swiftly you can avoid having to mix any more adhesive. Otherwise, use the adhesive you reserved earlier.

Tip: The Worrywart’s Guide to Finishing Seams and Edges

You may recall from the fitting article that the fenders stopped about half an inch short of the doorjamb edges. Jerry Geiszler and Darrold Elhard assure us that it’s safe to extend panels and build edges with fiberglass-reinforced panel-bonding adhesive. Even the factory did it.

But it does have one potential shortcoming: resins shrink as they cure, and because the edge of a fiberglass panel is so thin and offers very little surface area, it’s possible for the adhesive to pull away from the panel edge. That can cause a witness mark, which is basically a hairline crack that prints through the paint.

There are ways of preventing this from happening. The one we’re sharing is a variation of a technique taught to me by my fiberglass mentor, a commercial-composites guy named JB Donaldson.

Is this excessive? Probably. However, given the cost of labor and materials nowadays, any opportunity to eliminate potential issues is a real-world insurance policy worth buying into. At least it is to JB and me.

Start by building up the edge and fill the holes with adhesive.

Then grind the surface back down so it tapers to the edge. Don’t be afraid to grind back a ways if the surface allows—an inch usually suffices, though.

Now laminate some 2-ounce chopped-strand mat over the ground area. Build up the laminate higher than the panel to avoid having to use any filler on the edge. If you want to go the extra mile, grind back the material at the top of the jamb and laminate over it as well.

This technique also applies to burying seams between panels and filling holes. Just grind a shallow valley where the panels meet (or a crater around the hole), build up the valley with mat and resin and then sand after the resin kicks.