Floor Show: We start rehabilitating a worn-out ’56 Chevy with a pair of new floor panels 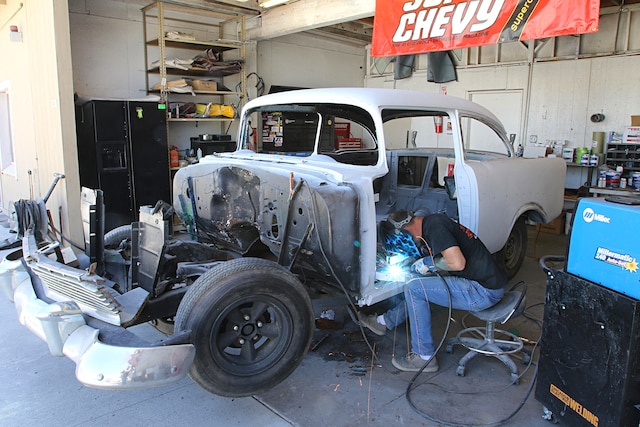 They say time heals all wounds, and while that bit of philosophy might hold true for humans, it’s quite the opposite in terms of our classic Chevys. You see, when it comes to vintage steel it’s time that causes the wounds, usually in the form of rust and rot. Thankfully, ditching the rust is only a few basic tools and some aftermarket replacement panels away.

This brings us to our ’56 Chevy project. The rolling shell was picked up for cheap, but getting in for less cash meant the car needed more work to get it back into acceptable shape. This is a California car so there was minimal rust, except for the front floors where water must have puddled and worked its evil magic. After surveying the damage, which was most extensive on the driver’s floor area, we called up the Tri-Five gurus over at Danchuk and ordered up some replacement panels. Our next calls were to Summit Racing and Eastwood for some materials to get the job done. Finally, we hit up Superstition Restoration in Mesa, Arizona, to help with the heavy lifting of turning parts and supplies into a solid ’56 Chevy that we could move closer to paint. The whole repair, driver’s and passenger’s floors, took a solid day and we feel it’s one of the easier do-it-yourself panel replacement projects that can be done. So, follow along as we take a small step toward saving a neglected ’56 Chevy.

1. In the 60-plus years our ’56 Chevy has been around, people have done a few repairs. Some good and some not so much. One example is this finely done floor repair. A big sheet of metal and some screws was the previous solution. The patch on the trans tunnel is where someone hacked a hole through for a shifter.

2. And here’s what they were covering up. Sure, the sheet of metal was better than dragging your toes on the road while driving, but we’re confident the guys at Superstition Restoration can do more than a little better.

3. The solution was a partial floorpan from Danchuk (PN 1799A). First up was setting the new panel onto the old floor.

4. Mike Rossi of Superstition Restoration in Mesa, Arizona, then traced around the edge of the new Danchuk panel with a marker.

5. Once done, a second mark was made just inside the first mark, about an inch away. This would be our cut line.

6. With that line drawn, Mike broke out the power tools along with some 3M cutoff wheels we picked up from Summit Racing.

7. Mike continued to cut along the inner line all the way around the perimeter. We were also careful not to cut too deep in certain areas since there are braces below the floor that we didn’t want to slice into.

8. One of these braces runs from the trans tunnel to the rocker just below the foot pedals. Here, the floor was spot welded to the brace. Mike used a 3M Rolock wheel, again from Summit, to grind the spot welds down and free the floor section.

9. Once we’re done on the driver side, we will do the same procedure on the passenger side.

10. And here’s the old floor section removed from the ’56. You can see the brace that the floor was spot welded to.

11. Using the 3M Roloc wheel, Mike then ground the edges down to bare metal in preparation for welding.

12. The crossbrace had a pretty good coating of surface rust so before welding in the new floor we sprayed down the entire area with Eastwood’s Rust Converter (PN 51676). We used the spray bottle, but it also comes in 1-gallon jugs (for large jobs) and a new aerosol can.

13. This stuff is pretty cool. The spray converts the rust into a black protective polymeric coating that doesn’t need sanding! The converted coating is suitable for primer and is compatible with most topcoats. Since it seals the surface it also helps prevent future rust growth.

14. The exposed metal along the edges was then hit with a coat of 3M Weld-Thru II primer. This zinc-based coating will help keep the rust away from area ground down for welding.

15. Using a pneumatic punch, we added holes all along the edge of the new Danchuk panel. This will make for a much stronger bond when we get to welding the new floor section into place.

16. Every few holes we used a sheetmetal screw to secure the floor section in place right where we wanted it.

17. Mike then went about stitching the floor to the rest of our ’56 with his Miller 140 MIG welder. Once he had worked his way completely around, he pulled the sheetmetal screws and tacked up the resulting holes.

18. After the floor was welded, including tacking it to the floor brace, we ground all of the welds smooth.

19. We then worked our way around the edge with some Eastwood Brushable Seam Sealer. This will waterproof and fill all the cracks and crevices where the new floor meets the old. When we get around to undercoating the car, using Eastwood’s undercoating system, we’ll seam seal it on the bottom side as well.

20. And here’s our completed floor, seam sealed and ready for a coat of paint and eventually some Dynamat. Overall, this was an easy repair that we were able to knock out in a half day (full day for both sides). With this, our ’56 project gets one step closer to hitting the paint booth and eventually the road.