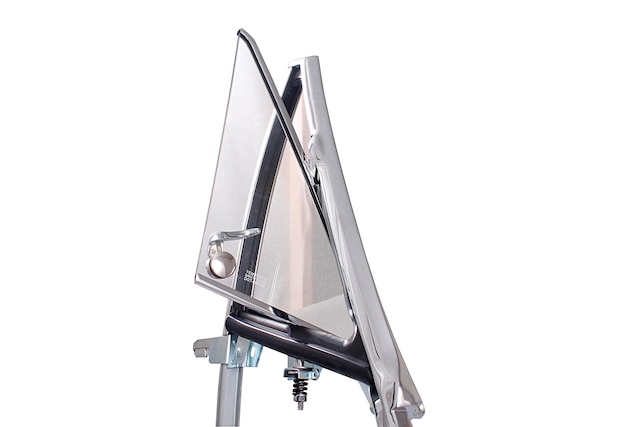 As with many projects, you start down one repair path and end up going in a different direction.

We’d never repaired a vent window assembly before, so this project was a completely new adventure. The first order of business was to read the instructions … which don’t exist. The best thing we thought to do was to search the Internet for tutorial videos. After viewing a video for a ’67 Firebird vent window, we got an idea of how the window comes out of the door. The rest was up to us to figure out.

Peeling the Onion
People said that removing the door glass was required to get the vent window assembly removed. We didn’t want to do that unless it was absolutely necessary. Adjusting the door glass isn’t fun so we didn’t want to mess with it. We found two Phillips screws, that when removed, allowed us to slide the window glass all the way toward the latch assembly. This gave us the room we needed.

The external window felt had to be removed in order to remove the vent window assembly. We got a little rough with the window felt and broke one of the clips. Great! Another part to order from NPD. With care, it should be able to be removed without breaking it.

The Frustration
Unfortunately, they were completely out of stock on the complete assemblies with clear glass. The only way to fix it in a hurry would be to order an assembly with green-tinted glass and swap that with our clear vent window glass. How hard could it be to remove a good piece of glass from both channel frames and install our original clear glass in the new vent window channel frame? It seemed like a good idea … at the time.

The Silver Lining
Since we were replacing a part that was already adjusted properly, we had a lot of the work done. We set all the adjustments based on the original window. If you’re starting from scratch, you’ll need to consult a factory service manual to adjust the door glass.

Luckily, the project didn’t snowball into an engine swap or new floorpans, and we even learned a couple of things. In the end, the journey was a little frustrating, but we got to the same destination and now we have a vent window that works and the wind noise inside the car is gone.

Tape the glass surfaces to prevent scratches. The tape also gives a small layer of protection against breaking the glass while working around it with tools. CHP

1. The vent window would not close without pushing the window into place manually and the old seals were in bad shape.

2. We thought we were going to rebuild our original vent window assembly, so we ordered all the necessary parts from National Parts Depot (NPD): seals, adjusters, handles, vent window studs and rebuild kits, and door panel clips.

3. We removed the door panel then rolled the window down to the bottom and removed two screws from the long horizontal channel, which allowed us to safely drop the window and slide it toward the door latch. It was necessary to remove the external window felt to get the vent window assembly out of the door.

4. We used an X-Acto knife to cut the seal out of the window channel at a steep angle. We then used a composite scraper between the glass and the channel to give a little leverage to work the glass out of the channel. Wedging a metal tool against the glass will cause it to shatter.

5. For comparison, the original pivot stud (left) was broken. The new OER assembly (right) from NPD is complete, with the tension spring.

7. To remove the vent window handle, begin with taping the glass to keep it from getting scratched or broken by a tool. Place the handle on a wood block and tap the roll pin out with a small drift punch (see arrow for direction). The wood block is used to support the handle and keeps the glass from breaking.

8. With the original handle removed, you can see that there are two wavy washers to reduce friction. The notched tip of the stud works in conjunction with the notch inside the handle. The drill bit in the handle was used to push the roll pin through the handle an extra 1/8-inch for removal.

9. Notice that the notch is parallel to the bottom edge of the glass (to the left of the photo). This is the correct alignment when using the original vent window handle.

10. This shows how the factory vent window handle is parallel to the edge of the glass.

11. The new, reproduction vent window handle looks nice but the clocking is off. It isn’t parallel to the side of the window.

12. The window has a specially shaped hole and special bushings to keep the vent window handle stud in a specific, clocked position. The stud, bushing, specialty washers, and nut are part of the Stud Assembly Vent Window Handle kit (PN C-10664-150K).

13. Luckily, the clocking bushing is rubber and pliable enough to clock the stud counterclockwise a few degrees.

14. This enabled us to position the vent window handle parallel to the edge of the glass.

15. Using a block of wood under the handle to protect its chrome finish, tap the roll pin into the handle just enough to get it started and see it pop out of the hole inside the handle.

16. Install the two metal wavy washers on the stud, then place the handle on the stud and carefully tap the roll pin into the handle. We used a rubber ruler to protect the edge of the glass from the hammer.

17. Position the wooden block on the edge of the bench and have a helper hold the glass while driving the roll pin flush with the handle using a small drift punch.

18. Place the rubber strip around the glass. The strip that came out of the OER vent window assembly had relief notches cut in the corner to keep the rubber from bunching up.

19. We lubricated the outside of the rubber strip (not the surface that touches the glass) with liquid laundry detergent and started pushing the glass into the channel. Use a pointed composite (not metal) tool to assist the rubber seal into place. If it hangs up while pressing it into the channel, be careful not to cut the seal.

20. With a pair of 24-inch bar clamps, two screws (for the channel stop), and some wood, we made our own jig to help press the glass into the frame channel. The angled piece of wood was not attached. Instead, it was moveable for best positioning. We also ran two strips of tape on the edge of the glass that touches the wood.

21. We could have made the jig more elaborate to stabilize the assembly, but the design worked great. The channel stop was to keep the assembly from sliding out of the jig.

22. The soft jaws have grooves that helped position the frame.

23. Install the proper metal and fiber washers when reassembling the vent window assembly. The lower washer limits the travel. Confirm that it’s installed properly and the window pivots in the assembly correctly.

24. Tighten the nut to apply tension to the spring but don’t collapse the spring to full coil-bind (The tension keeps the vent window from flopping around when driving with the vent window open), then bend the tab over to lock the nut in place.

25. Tape up the top edge of the door if you want to protect against scratches during installation. The vent assembly adjuster slides into the door as shown. Once the adjuster is inside the door, turn the assembly 90 degrees clockwise.

27. After the window is adjusted, insert the window felt clips into the slots in the door.

28. Only the center tang of the clip goes into the slot in the door. Get all of the clips in place before pushing them all the way in and locking them in place.

29. Watershields are commonly overlooked items. These shields keep water from running down your interior door panels and running into your car. Without them, your door panels will get water damaged and your floorpans can start to rust. The factory ones are cellulose (waxed paper). We chose the Mylar because it offers the best moisture protection. We used butyl ribbon seal to seal the watershield in place.

30. As the factory did, we tucked the watershield into the drain slot and taped the corner to cover the edge of the butyl that rolls out to keep water behind the shield. The tape keeps the butyl off the back of the door panel.