Filling in the spare tire well in a Tri-Five Chevy 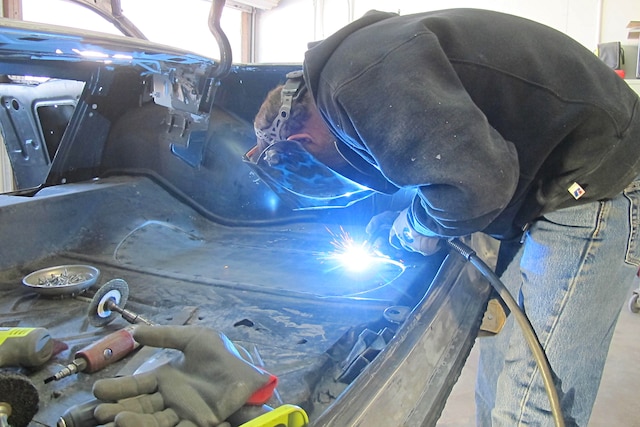 Last month, we started rehabilitating our ’56 Chevy 210 project by replacing some rust-rotted front floors with new sheetmetal patch panels from Danchuk. This time around we’re filling another hole in our Chevy; not because of rust, but instead because it will eventually be obsolete. Yep, the spare tire well in the trunk worked great with stock-sized rollers, but with our planned wider rubber it will just become vestigial, sort of like the Chevy’s appendix.

To clean up our trunk, we decided to remove the tire well and seal up the opening with a fabricated panel. Sure, they sell pre-cut replacement panels, but making your own is cheaper and frankly not that hard. So, follow along as we get our ’56 one step closer to a fresh coat of Axalta paint.

1. This indentation in the trunk floor was designed to accommodate a spare tire. Of course, once you move to larger, wider rollers it becomes somewhat useless. So, to clean up the trunk area we decide to remove the spare tire well. First up was scraping away the paint and sealer hiding the factory spot welds.

2. We could then drill out the factory spot welds holding the spare tire well in place.

3. There were quite a few of them with a spot weld every couple of inches.

4. Once we had worked our way around the perimeter, we were able to remove the factory tire well.

5. Using the OE tire well as a template, we were then able to make a flat panel out of a scrap of cardboard in the same shape. By taking this step we were able to test-fit the cardboard for proper fitment.

6. After confirming the shape, the cardboard was used to transfer that shape to a sheet of steel.

7. The edge of the tire well hole was sanded to bare metal and hit with a coat of Eastwood Weld-Through Primer in preparation for welding. Next, the panel was secured in place with a handful of sheetmetal screws.

8. Under the car, Mike Rossi of Superstition Restoration, started tack welding the panel in place using the holes we made drilling out the original spot welds.

9. On top, a heavy Eastwood block was used to hold the panel tight to the floor while welding. We had someone move the weight to save Mike from constantly having to get out from under the ’56.

10. And this is what it looked like under the Chevy once Mike was done working his way around the perimeter. Eventually, this will be hit with some Eastwood seam sealer before the bottom of the car is undercoated.

11. Back in the trunk, Mike removed the sheetmetal screws.

12. We could have just seam sealed over the holes, but we instead opted to hit the holes with another round to tack welds using our Miller TIG welder. This panel might be the strongest part of the car now.

13. With the welds ground smooth and given a coat of Eastwood seam sealer and Epoxy primer, the trunk looks like it came from the factory this way.

This 1956 Chevy 210 wasn’t built to compete at car shows (although it could) or run at racetracks. It was built to hit the highway and be as fun to drive as it is dependable. With a big-block crate engine it’s got enough power to make you smile and the upgrades modernizes the ride without killing the retro vibe.

Andy Bond one-ups America in the faux patina Chevy scene with this amazing 1956 Chevy 210 from England.

Donas Singleton knew he had to have this 1956 Chevy Bel Air 210 the first time he saw it. After a little bit of elbow grease, his dream car goals have been realized.

This 1956 Chevrolet 210 is still a work in progress but check out all the specs and video as we tested the Heidts IRS!

Joe and Josh Bailey’s amazing 1956 Chevrolet 210 Sport Coupe started out as a junkyard find. Read about its transformation to the beauty it is today.