Repairing a Rusted Roof on Your Early Chevy II or Nova

Rehabilitation Program—Part IV: The roof on our 1963 Chevy II goes from sieve to solid with the use of patch panels 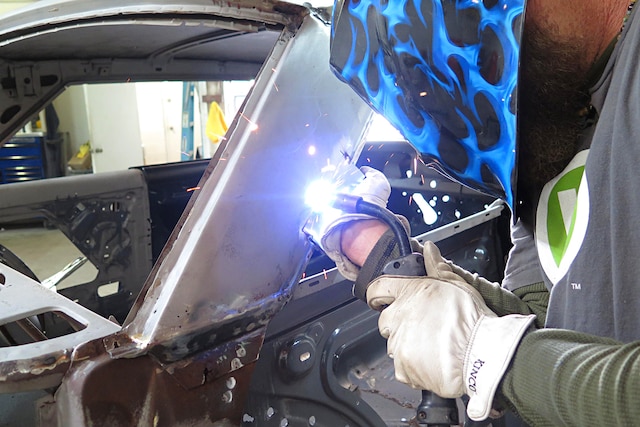 Our 1963 Chevy II has come a long way since we started the rehabilitation process several installments ago. As you might remember, we inherited this project from another gearhead that moved on because of the large amount of rust the Chevy was infected with. You see, that’s the trade-off with these classics, especially the more popular nameplates. If you want to buy into the car for less coin then you have to accept that what you’re starting with will be in less than perfect condition, often way less.

But just about anything can be brought back to life with enough tools, welding rod, time and, of course, cash. In previous installments we’ve removed rust, added wider Detroit Speed mini-tubs, and replaced the quarter-panels and doors with new pieces from Golden Star Classic Auto Parts. This time around we tackled the roof. The unique problem here was that nobody made a replacement roof and ours was pretty bad off. We decided to address the problem with patch panels. The good news is that this type of repair doesn’t cost much cash, just some welding rod and scraps of steel, but it does require time and a bit of skill. Since our Chevy II is going the custom route we decided to shave the rotted driprails, although with a bit of effort we could have saved them.

After this task our Chevy II should be in pretty good shape and ready to start moving toward being a car again, which will involve fitting a Schwartz Performance chassis, but that’s another story for another time. For now, follow along as we relegate the last few rusty areas on our ’63 Chevy II to the dustbin of history.

1. Our ’63 Chevy II had been hammered by time and Mother Nature, but one area that really suffered the ravages of time was the roof. Making matters worse was that nobody offered an aftermarket replacement panel.

2. After some mediablasting, Justin Smith and Mike Rossi of Superstition Restorations in Mesa, Arizona, could see how bad things really were. Most of the areas along the factory driprails were Swiss cheese, so before surgery could start they hit the areas with a wire wheel.

3. The old lead filler was then burned out at the base of the A-pillar. A respirator should be used while burning out the lead because of the fumes, which aren’t good for you.

4. Switching between the torch and a wire brush cleaned out all of the lead pretty quickly.

5. The lead removal process was repeated on the C-pillar. We’re not replacing the roof but we wanted to take everything down to bare metal to make sure all vestiges of rust were exorcised.

6. And this is the area after being cleared of lead. If we had a replacement roof this is were we could separate it from the C-pillar.

7. As we said, nobody makes a replacement roof and the driprails were pretty bad so we opted to just shave the driprails for a cleaner look.

8. Once the driprails were cut free we cleaned up the edge with a grinding disc. You can also see how badly rotted the roof was on our Chevy II.

9. With the driprail cut away, we needed to make a fill strip to bridge the gap. We snipped a strip out of some sheetmetal we had on hand.

10. Once cut, we carefully put the patch strip in place starting at the bottom of the C-pillar.

11. We were then able to tack it in place using our Miller 211 MIG welder.

12. Once the strip was fully welded in place we ground down the edge and started patching the rust damage.

13. A paper template was made and then transferred to a piece of steel to get us close. That piece was then marked and trimmed to fit the hole perfectly on three sides. The fourth edge was left long.

15. A cutoff wheel was employed to trim away the patch panel excess.

16. After welding the fourth edge, the welds were ground down.

17. The same basic procedure was carried out on the other areas of the roof with rust damage. The bad areas were cut away, templates made and then transferred to fresh steel, and the new patches tacked in place.

18. When all the areas near the driprails were patched the roof welds were ground smooth.

19. With the roof done, we attacked the C-pillars. Here’s a tip; when you cut away the rotted section, spray or brush some rust converter as far as you can around the exposed area.

20. As you can see, the C-pillar patch was done the same as the other patches. When welding it’s a good idea to go slow with a few tacks, allow those tacks some time to cool off, and then add more tacks. If you try to weld the whole deal up at once the panels will warp, creating more work before the area is ready for paint.

21. We also pulled a few dents that were in the corners of the roof, and with that our roof was ready for bodywork.

22. The driprail shave came out great and since we’re building a Pro Touring style ride it will give a modern look to the project. Up next will be getting the Schwartz Performance chassis fitted under the Chevy II.