Rehabilitation Program—Part III: Our 1963 Nova takes a big leap toward being a car again with the addition of new quarter-panels 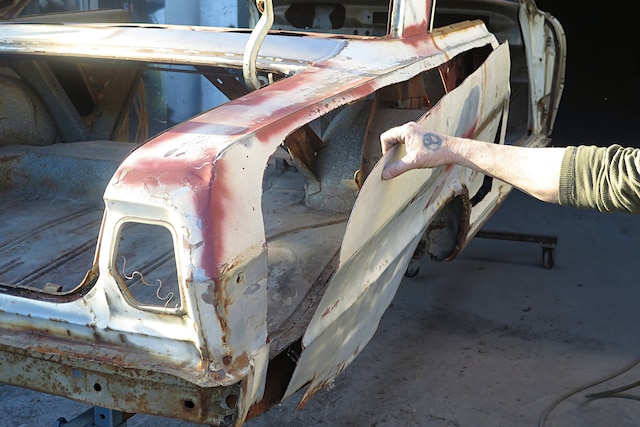 Time is hard on our old Chevys. Sure, when they were made the factory gave them a certain amount of rust protection but, trust us, nobody at GM expected these cars to still be on the road 50 years later. Over time the factory rust protection fades away and Mother Nature works her way into the cracks and crevices; namely in the form of rust. Add in five decades of dents, dings, and accidents and many of our Chevys are in pretty rough shape.

Our 1963 Chevy II was like this. Tons of rust and blunt force trauma made for a Chevy that, for most people, was just not worth the effort. Which is how we were able to get the starter shell for almost nothing. In part one of this series, we made a plan and mediablasted the ’63 to see what we were working with. In part two, we sliced away a good chunk of the rotten quarters and welded in a sweet set of Detroit Speed Inc. (DSE) mini-tubs. Now it’s time to finish removing the old quarters and get some new panels from Golden Star Classic Auto Parts in place. To do the heavy lifting we drafted the guys over at Superstition Restorations in Mesa, Arizona. Once we get these new quarters in place we can try to save the Chevy II’s roof, which is a good plan since nobody makes an aftermarket replacement. Once back in sunny Southern California we can see how well the Chevy fits onto our shiny new Schwartz Performance chassis. But for now, we have some quarters to stitch in place.

Before Justin Smith and Mike Rossi of Superstition Restorations sent the battered Chevy II over to get mediablasted they removed the main areas of the quarter-panels to give the blaster better access to the inner structures.

Once back from mediablasting, we could start removing the rest of the battered and rusty quarters. Using a cutoff wheel, the seam between doorjamb and the inner structure was cut and we started drilling out the numerous spot welds.

We were then able to use a hammer and a small, flat-tipped chisel to separate the two pieces.

We were then able to use a hammer and a small, flat-tipped chisel to separate the two pieces.

After a bit of work we were able pull the old doorjamb area free of the inner structure.

To access the spot welds near the C-pillar we first cut away a section of the outer quarter.

Using a spot-weld drill bit, the welds were removed.

This allowed us to remove the forward section of the quarter-panel. Remember, it’s better to go slow and remove small sections at a time than to try to do it all in one shot, only to find out you’ve removed too much, creating a lot more work.

Next up was where the quarter met the trunk. Like the rest, we “snuck up on it” by removing the main portion before attacking the seam.

Getting the large sections out of the way makes it easier to concentrate on getting the edges cleaned up nicely and ready for the new Golden Star Classic Auto Parts quarters.

So, how were the lower quarter extensions attached? You guessed it, more spot welds. This time, Smith, broke out his specialized spot weld drill.

So, how were the lower quarter extensions attached? You guessed it, more spot welds. This time, Smith, broke out his specialized spot weld drill.

More spot welds held the rear cross rail to the back of the Chevy II. In addition to the ones along the top, there were also four spot welds securing it to each framerail.

With so much of the Nova removed, we decided it would be a good idea to brace what was left to keep the structural integrity of the Chevy in check.

With the bracing in place, we went ahead and removed the driver-side quarter.

With all the bad parts in the scrap bin we could start putting the new panels in place, starting with the driver-side quarter-panel from Golden Star Classic Auto Parts.

With both quarter-panels clamped in place, it was time to test-fit the new rear cross rail.

The fit was good but we needed to massage the original flange a bit since it got tweaked a bit when we removed the rotten cross rail.

The new quarter butted up nicely to the outer wheeltub we installed when we did the Detroit Speed mini-tubs.

We marked the new quarter-panel in the striker area where we would need to drill for the spot welds.

A small amount of trimming and bodywork was needed where the new quarter met the C-pillar. Or, as the writing says, just a “hair more.”

The key here was to test-fit, tweak if needed, and make sure everything lined up as good as possible before starting to weld.

The original trunk lid was then installed so that any adjustments could be made to the new panels.

Once the gaps looked acceptable we started securing the panels with self-tapping screws and locking pliers.

It was then time to start making dozens of spot welds.

Of course, that left a gap between the top and bottom of the trunk lid so we busted out the Miller 211 MIG welder to fill it in.

A little more welding and a bit more grinding and the area around the taillight was ready for bodywork.

We opted to stitch the C-pillar to the quarter. Once bodyworked, this will look a lot cleaner than having a seam.

We have plans for a different style fuel tank so to clean things up we welded up the factory gas fill hole. And with that, the Chevy II was looking a lot better. Next up, is fixing the Swiss-cheese roof with some artful patch panels.