How to Properly Wet-Sand and Polish Your Car

Picture-Perfect Paint: Getting the most performance from your car’s finish 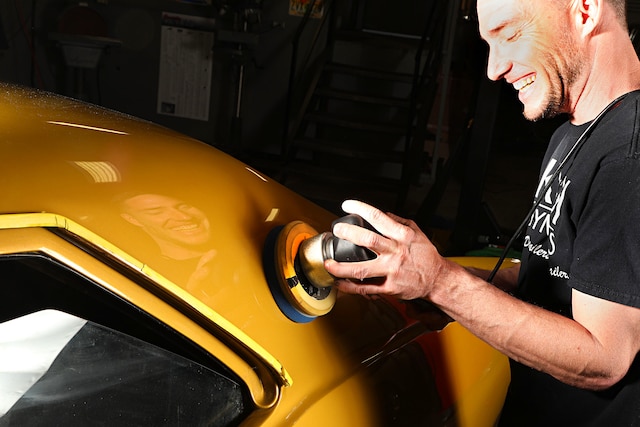 Until recently, people rarely referred to paint in terms of performance. Performance described how well a vehicle accelerated, cornered, or braked. But paint? Unless you were building a show car, it was just the stuff that kept a car from rusting.

Typically speaking, most paint stories emphasize the importance of preparation. And it’s true; what you see relates directly to what happened before the paint went on. But the finishing process doesn’t end once the clear goes on. In fact, to some, like our pal Jason Killmer, cured paint is just a blank canvas.

Jason’s a detailer, but not the kind who cleans cars. He’s the guy who perfects seemingly impeccable parts that make up mind-blowing show cars. And builders—the biggest names in the industry—fly him all over the country to do it. He doesn’t just make cars prettier, he make them winners. He has multiple Don Ridler Memorial Awards under his belt.

Most of us won’t (and probably shouldn’t) build a show car, but that’s not to say we can’t learn a few things from show-car building practices. In fact, Jason’s going to teach us a relatively inexpensive way to make an ordinary production paintjob look like it cost several times more than it did. In fact, these are the very techniques he uses on those show-car paintjobs.

Make no mistake that there’s still a big gap between an inexpensive production paintjob and a full custom job. But the vast majority of enthusiasts—maybe even you—can’t spot the difference after a little bit of work.

1. This Nova was shiny, but the surface just wasn’t quite right. It was better than orange peel, but it wasn’t exactly smooth either. In fact, you could hardly see the metallic elements in the finish through the texture.

2. Jason begins by taping off the sharp edges and ridges around the area where he’ll work. Surface build is always thin around these shapes, and a polishing pad can tear through it before you even know it. Any tape works, but low-tack tape removes easier.

3. If possible, measure the coating thickness on the car. But understand that this is not as much a measurement of the thickness of the paint as it is the total coating, including primer and filler. So measure in as many places as possible to get a good gauge of what’s on the car, and measure your progress as you work.

4. Jason recommends beginning with 1,000-grit sandpaper. Coarser paper works faster but you’ll eat up the time saved when it comes time to eliminate the sanding scratches. Finer paper, say 1,500, leaves finer sanding marks that are easier to remove but the job takes a lot longer.

5. Here’s a tip: always use a firm backer block. Sanding with your hand grooves the paint with the profile of your hand and fingers. Most folks improvise, but Jason manufactures these acrylic blocks with foam surfaces. We’ll talk more about them in a bit.

6. The other component to color sanding is water. It sloughs off the removed paint to prevent it from clogging the sandpaper. Some people add a few drops of dish detergent to the water but Jason uses straight water as he says it makes it easier to feel the surface tension change as the panel flattens out.

7. Cut the paper and wrap it around the block then sand diagonal to the block’s shape. Sanding in the direction of the block will groove the finish and sanding perpendicular to the block might not flatten the surface consistently. Try to sand in one direction as much as possible (we’ll explain later). You’ll feel the friction increase as you knock the irregular surface down flat.

8. Gauge your progress, especially as you start to work. View the panel at an obtuse angle—say at about 135 degrees—and hold your light source at the inverse angle so you see the light source in the spot you’re working.

9. Here’s how that inverse-angle light source appears. In this case note that the sanding marks cover the entire area, leaving no tiny pits of shiny finish. Essentially, you’re knocking the finish down to the lowest valleys in the paint finish. Sand to that point but no further. Note that while dull, the finish shows the fluorescent tubes in finer detail. This is progress.

10. The moment the finish levels out, switch to a finer-grit paper. Remember the instruction to sand in one direction as much as possible? Sanding perpendicular to that direction with a finer paper makes it easier to see remaining sanding marks from the coarser paper. It’s not necessary but it makes the job easier. Jason went 1,000-grit, then 2,000, and ultimately 3,000. Yes 3,000 is overkill but it minimizes compounding with a rotary polisher, which is faster, less discriminate, and potentially more destructive.

11. For this job we used Heavy Duty Rubbing Compound from Mothers’ Professional Refinishing System. Mothers claims that it sufficiently eliminates 1,200-grit sanding scratches but Jason maintains that sanding with finer paper ensures more control with less material removal. He recommends using about a quarter-sized dollop of product and working 1 to 2 square feet at a time.

12. Jason recommends a wool pad on a foam backing plate. The foam plate lets the wool pad better conform to uneven surfaces. A hard plate can concentrate pressure on a spot, which can burn paint.

13. Before pulling the trigger, smear the dollop of product around the working area. This distributes it as a thin film where it’s less likely to fling off once the polisher starts spinning. Again, Jason recommends sticking to an area about 1 to 2 square feet.

14. If you take away one thing from this, it’s that slower is better—about 1,000 rpm or slower according to Jason. It offers more control and minimizes the risk of damage. A soft-start polisher is also a good idea. Constantly move the pad in an overlapping grid and vigilantly watch for heat; it will quite rapidly burn off the paint. Watch for an incredible shine to emerge from the dull panel.

15. Compound establishes a good shine but it’s short of the ultimate shine. For that we need a polish. Mothers’ Scratch Remover is just the ticket. He’s using it on a fine foam pad designed specifically for polishing, not compounding.

16. Foam doesn’t automatically distribute product consistently so Jason conditions it with the polish. He squirted a narrow stripe around the center and worked it in by hand.

17. Jason then worked the panel as he had with the compound on the wool pad. Again, constantly keep the polisher moving and watch out for heat.

18. The results of color sanding and polishing are as obvious as can get. This is the reflection of the same fluorescent array that we used earlier. Rather than a big white blob, it shows as individual lamps—even the box they’re in is clearly visible, as are the dark ends. Shine doesn’t get much better than this.

19. Intricate shapes like these vex even the best detailers. Sandpaper needs a good blocking surface to work properly and a finger doesn’t necessarily conform adequately. And it’s obvious by the ragged edge of orange peel here that this surface needs some attention.

20. So Jason and his partners developed a line of sanding blocks for block- and color-sanding surfaces. The KXK Dynamics R.I.D. Stix measure about half an inch across, 3/4-inch tall, and about 2-inches long. The white stripe is solid acrylic, but the black surfaces are dense foam; one is cut square and the other has radius edges.

21. The radius edges let the blocks conform to concave surfaces, but that’s just the start. The blocks can be custom-profiled for any shape. Tape some sandpaper to the surface (grit side out, of course) and rake the block against it.

22. Within a few strokes the block assumes the shape of the surface, ensuring a consistent sanding pattern.

23. Wrap the block with a small piece of sandpaper (grit side out, of course) and work the panel as if you were using a big block on a large, flat surface.

24. A rotary polisher isn’t always the best option for finishing complex shapes—in this case the sharp edges bordering the concave section are really vulnerable. So just use a microfiber towel with whatever compound and polish used on the remainder of the car.

25. Note the total absence of the ragged edge in the highlight. The results are just as dramatic as they were on the rest of the body. In fact, it’s the details like these that really set a car apart from the others.