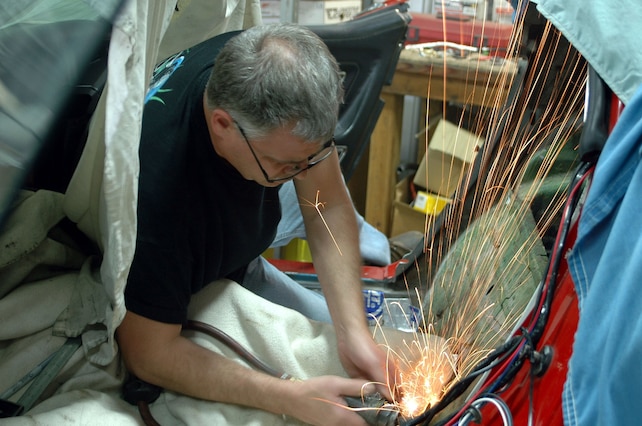 Alert readers will notice that it’s been about four years since we tore down Scarlett, our 1972 coupe project car, to begin what was originally “only” an LS swap. Since then we’ve rebuilt or replaced every major system in the car, including a scratch-built chassis with C7 suspension and the most advanced offerings from Wilwood and QA1 to keep her 635 ponies firmly connected to the pavement. This leaves us with a handful of mechanical details to wrap up before we consign the car to paint jail. While perhaps not as dramatic as adding 15-inch front brakes, these are still critical things that need to be addressed, such as where to mount the coils (always a challenge for LS retrofit) and sealing up the car to avoid the leaks that plague any 40+ year-old car.

We had originally planned to use a set of takeoff LS3 coils sourced from eBay, but Performance Distributors generously provided us with a set of their Sultans of Spark (SOS) coils (with apologies to Mark Knopfler). Founded by Kelly Davis, Performance Distributors was the first company to produce a performance HEI distributor, with a focus on carefully developing timing curves for each customer’s particular application. Known as the Davis Unified Ignition (DUI) distributor, the use of a single, long-duration spark rather than multiple smaller ones allows a wider plug gap while requiring less amperage, which also allows the unit to run cooler. Performance Distributors has built on this foundation with their LS coil packs, which deliver some 7,000 more volts per coil and can fire a plug gapped as wide as 0.065-inch.

With the SOS coils in hand, paired with a set of custom LiveWire plug wires, also provided by Performance Distributors, we then turned to the problem of mounting them. Unable to use either the factory-style coil bracket or an aftermarket one intended to match our valve covers, Tray Walden designed and fabricated a pair of brackets that filled the valley between the valve cover and intake, covering the bundle of wires we have running down each valley.

Prior to tearing Scarlett down, we expected to see the customary, infuriating puddle on the floorboard every time it rained. We’re not prepared to accept this after the rebuild, though, especially considering all the electronics we’ve added ... including the ECU and ignition box, both of which are located under the seats. Sealing up the firewall is something we left for the fiberglass guy, but that left us with the question of the fresh air vents on the passenger side of the car that vent air from the cowl area into the floorboard. Having already sealed up the bottom oval opening with a Vintage Air block-off plate, we turned to the top opening that is opened and closed by a vacuum operated flapper that usually holds it open. Removing the vacuum actuator, we cut it apart and used the operating components to make a spring-operated assembly to hold the flapper shut.

For those so inclined, it’s obviously possible—but quite a bit of work—to fit your hands into the small openings and get the parts oriented correctly, not to mention trying to safety-wire the whole thing together down deep inside the cowl. It was an interesting mechanical challenge, but next time we’ll probably just remove the actuator and glue it all shut with black RTV.

One decision we put off as long as possible was how to handle the storage tray area in the rear. One good look at the rollbar will tell you there’s no way we’re getting the body onto the frame without cutting out the entire back deck, which we did some time ago. Similarly, the considerable bulk of the C7 rear suspension and wider rear tires meant the floor of the back deck has to be raised to make room. All of this reduces the space available for storage, which is already at a premium in a ’72. Since we intend to use Scarlett for road trips, the challenge was to entirely re-create the back deck area, including the storage and battery compartments, while maximizing the amount of luggage room possible.

Since none of us were all that excited about doing it in fiberglass, Walden built the boxes and rear deck from aluminum, which was then riveted to the frame, making the rear deck and frame a single unit, which will be sealed to the body after we do the body drop. We’ll also insulate it prior to reinstalling the body, as there’s precious little room in which to work otherwise.

Another element we haven’t covered yet is getting the power from the transmission to the rear wheels, which we’re doing via a Hammerhead rearend housing. Built to Walden’s specs for both his chassis and Viper applications, the Hammerhead uses a 12-bolt gearset and is rated for 1,000 horsepower. Considering that Scarlett is being built for both track work and general driving, we selected a 3.73:1 rear gear as a compromise between the two.

While other details remain, this installment pretty much wraps up the mechanical work, leaving us with fiberglass and paint to go.

1. Originally, we ordered a set of takeoff LS3 coil packs and accompany brackets to power our stroked LS3. Of course this is also back when we thought we were “only” doing an LS swap. We quickly realized this wasn’t going to work with the car we were building and replaced them with SOS coil packs supplied by Performance Distributors.

2. Boasting a 7,000 volt-per-coil advantage over stock coils, the SOS coil packs allow you to run plug gaps as wide as 0.065-inch and offer improved heat and vibration resistance. In order to mount them, Street Shop’s Tray Walden designed and cut out a coil mount on the high-def CNC plasma, then had threaded bosses turned upon which to mount the coils and welded them in place.

3. The finished coil bracket after powdercoating and installation, shown with coils and plug wires installed. Performance Distributors also supplied a set of their low-resistance plug wires, which are built using a high-temp, non-flammable glass braid sleeve to protect the wires from heat. They were kind enough to make a custom set in the length needed to reach the plugs from our custom coil mount.

4. This view of a C3 with the fender removed shows a couple of the reasons these cars are known for leaking; note the large oval flapper at the bottom and the fresh air vent above it. While we used the Vintage Air-supplied block-off panel to seal up the bottom hole, we didn’t want to leave the top one free to leak.

5. Unlike the car shown in the photo, the top vent in Scarlett is held open by a vacuum-operated actuator that usually stays in the open position. Since we’ve stripped every bit of vacuum hose out of this car, you may gather it’s not long for this world.

6. When we cut open the canister on the bandsaw, this is part of what we found: the arm that hooks into a ring attached to the body well inside the cowl and the spring that would usually push that arm toward the body, keeping the flapper open and able to take in air … and water.

7. After reversing the orientation of the spring, we cut a piece of aluminum to act as a cap and located two screws on it in the same place the mounting screws on the vacuum canister used to be. That let us mount this spring-operated assembly in the factory position where it would now keep the flapper closed rather than open. A little black RTV didn’t hurt either.

8. Due to the addition of the rollbar and bulky C7 suspension, we had to cut out everything behind the seats, including the storage trays and battery box. Rather than building this back as part of the body, we chose to make it part of the chassis. We mocked up a battery by cutting a cardboard box to the correct size so we had knew how big the battery box had to be.

9. This is the raw material: 0.045-inch thick sheet aluminum. While Street Shop typically does heavier fabrication work, owner Tray Walden grew up doing sheetmetal work and therefore had a pretty good idea what to do with it.

10. Walden started by drawing the various parts in a CAD program and cutting those pieces out of aluminum using tin snips. The art of it is knowing how to lay out a flat piece of metal that can be folded into the shape you want, including any pieces that need to overlap other pieces.

11. Once each piece was cut out, Tray Walden carefully rolled beads in to give them added strength and bent them into shape using a manual press brake.

12. The main package tray test-fit into place. Notice that it sits within the framerails: a lot of work went into maximizing the very limited storage space left in this car after the addition of a rollbar, larger suspension and very wide wheels and tires.

13. Once satisfied the piece fit correctly, Tray used double-faced tape to seal the aluminum to the steel frame, then clamped it in place and drilled holes for the large headed rivets that will hold it in place.

14. Riveting the package tray into place using a pneumatic rivet gun. Although a little bulky to get into close quarters, it’s much easier than manually popping them all in.

15. The original battery box and storage tray will be replaced by this arrangement, with the battery mounted to the steel base on the left and the deep well on the right available for storage. A divider between the two will come later.

16. The package tray shown from the rear without the lid that will cover the battery and storage box. After this photo was taken, we used 3M seam sealer on all the seams to keep moisture out of the rear of the car. Other than a little room over the rear wheeltubs, this is all the storage the car will have, so pack light.

17. Scarlett came with a 3.08:1 rear gear in a heavy, cast-iron housing that could not be expected to take the abuse our LS3 416 will dish out. We replaced that with a heavy-duty housing produced by Hammerhead to Walden’s specifications. Designed for both Street Shop chassis and Viper applications, it takes a 12-bolt gearset and is capable of handling 1,000 horsepower. Rear covers are CNC machined in house from billet.

18. The rear cover in the vibratory tumbler after being finish machined and before being sent off to be anodized.

19. Although normally anodized in silver, Scarlett’s rear cover was done in black prior to having the Street Shop logo engraved through the new finish. We stuffed the case with a 3.73:1 rear gear and mated it to a pair of halfshafts rated to 1,200 horsepower, which should make for a bulletproof rearend.