We Install Mini-Tubs From Detroit Speed in a 1967 Nova 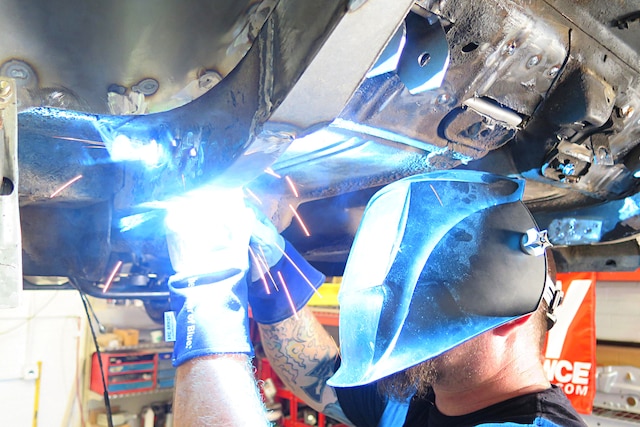 It’s often said that building a car is a process, and anyone who’s done it knows there’s a lot of truth to that. Sometimes the process requires a few handtools and a bit of time, but when you want to move beyond just bolting on parts, the process can get a lot more interesting.

Detroit Speed Inc. (DSE) understands that the process of building a classic car that handles with the best of them is one that often involves some metal surgery. That means cutting, welding, and all sorts of metal mayhem. Why? Because tying the parts into a car in this way results in a rock-solid foundation for the suspension parts to attach to. This is especially important when the goal is to hit the track and really push the car and its parts to the limits.

We certainly don’t shy away from cutoff wheels and welders, so we wanted to tackle a host of DSE parts on our 1967 Nova project.

In the previous installment, the front of our Nova received a Detroit Speed subframe, which was a piece of cake to install, but for the rear we moved into a whole new arena. On the menu are DSE’s mini-tub kit, through-the-floor subframe connectors, and their track-proven QUADRALink rear suspension system. All three of these require cutting and welding, but our Nova didn’t seem to mind, so we rolled it out to Thunder Alley in Mesa, Arizona, for fabrication wizards Mike Rossi and Justin Smith to perform some of their metal magic.

The QUADRALink system itself is well regarded in the Pro Touring community. Why? Because it works. DSE’s swivel links don’t bind and aren’t noisy like Heim joints. The system also incorporates long upper arms for better pinion angle control and it has improved antisquat geometry. The lower links are offset inboard for even more tire clearance, and the system utilizes several different coilover options based on how the car will be driven.

Being that the rear of this project is somewhat involved, we are going to break it into two parts. First up is dropping in the mini-tubs and knocking out a big chunk of installing the QUADRALink suspension system. So follow along as we get our Nova ready to do things on the track that it was never designed to do.

1. We got started by installing the DSE mini-tub kit. First up was drilling out the spot welds on the trunk brace then cutting it away from the old inner tub.

2. The new tubs are obviously wider than stock so the backseat brace needed to be modified. Using the supplied template, we marked the area that needed to be removed.

3. For a cleaner end result, we drilled out the spot welds at the bottom of the brace to separate the two pieces.

4. A cutoff wheel was then used to remove the section of the seat brace to allow for the wider tubs.

5. Back in the trunk, we used another DSE template to mark the area where the floor needed to be removed to accommodate the new tubs.

6. Using a combination of cutoff wheels and air chisels, we removed the old inner wheeltub. Keep in mind it’s better to cut away too little and “sneak up on it” rather than cut away too much and create a lot of extra work.

7. We then cut along the marked line to make way for the wider tubs.

8. Simply having wider tubs doesn’t quite buy you enough room, so thinning down the frame is necessary to accommodate the wider tires we’ll be running. After using the DSE template to mark up the outer framerails, we cut away the outer frame panel.

9. The old frame panel was then removed and tossed into the scrap bin.

10. The new, replacement frame panel from DSE came pre-cut and ready to rock.

11. With the old frame panel out of the way, we could start tacking in the new, pre-cut frame panel supplied in the DSE kit with our new Miller 215 combination MIG/TIG unit.

12. We could then slide the new, deep tubs into place. OK, that’s a lie. We actually had to test-fit them, trim away some metal, test-fit again, and repeat the process until they fit perfectly.

13. Once in place, we could tack them in then weld the perimeter. When that’s done we will go back and seam-seal the whole deal.

14. With the tubs done, we moved onto the Detroit Speed QUADRALink suspension system. First up was cutting a rather large hole in the floor. Using a measuring tape, we marked the floor per DSE’s instructions.

15. Using a straightedge and tape, we also marked the other side of the large rectangular hole that was needed.

16. A cutoff wheel made quick work of the floor.

17. And before long our reward was a large hole and an equally large piece of scrap metal.

18. We then busted out the drill and put holes around the perimeter of the opening. This will let us make the proper tack welds to hold in the new panel.

19. And here’s the box in place all ready for welding.

20. Just like the mini tubs, we tacked around the perimeter and will add seam sealer before we repaint the trunk and undercoat the bottom of the Nova.

21. The QUADRALink main box keeps the trunk functional while supplying many of the necessary mounting points under the car. While the amount of cutting may seem intimidating, it’s really not that difficult and it provides a rock-solid mounting system for the rear suspension.

22. The rear frame brace slides over the OE rail, and due to the shape, self-indexes right where it needs to go.

23. Once confirmed it was in just the right spot, it was secured with clamps and tacked in place.

24. Another brace needed to be added to hold the other pair of links so we grabbed another DSE template and, after measuring, marked the square holes that need to be made in the floor.

25. After drilling a few holes, we used a small saw to remove the center. A cutoff wheel would work as well.

26. With the holes cut, we moved back inside the car and laid out where the link-mount brace needed to go. It turns out that it’s right under the rear seat brace, so we drilled out those spot welds in order to get the new brace under the backseat support.

27. Here’s where the brace needed to be. We marked the edges, removed the brace, ground off the old paint in preparation for welding, reinstalled the brace, and went to town with our Miller 215.

28. It’s a lot of welding, but the results will be well worth it.

29. The mounts for the upper links are in place, but we still need to install the mounting points for the lower trailing arms. But that will have to wait until the next installment.