How to Replace the Tailpanel on a 1969 Nova

Pushing Tin: How to replace the tailpanel on a 1969 Nova 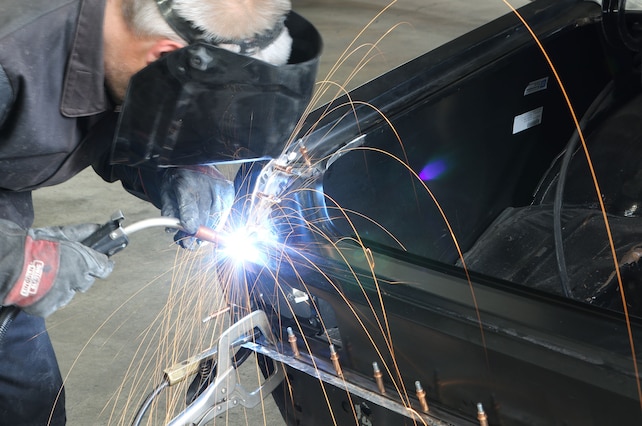 Old cars are cool because, frankly, they’re old. Yep, they don’t make them like they used to, but the downside is that they’ve had a lot of time to hang out and be abused by Mother Nature and bad drivers.

The 1969 Nova owned by Hot Rod Specialties’ (Upland, California) Joel Rode is a good example of your typical “affordable” classic Chevy. The quarter had been bashed in and badly repaired, and we found—while repairing the quarter—that the tailpanel received the same shoddy treatment. At some point it had been caved in and then beaten somewhat straight and given a thick coat of body filler. Add in some rust and it was definitely in the “replace” category.

The good news is that replacing the tailpanel is fairly simple, but you do need to work slowly so as not to cut away the wrong bits of metal, which would just cost more cash and give you a bad migraine. Joel is new to bodywork so it’s good to see how a non-pro would tackle a repair like this. After spending the day replacing this panel, we can say it would be easy for someone with basic metalworking skills to pull off. The key is to go slowly, think ahead, and plan accordingly.

So follow along as we take another step toward rehabbing this time-tired 1969 Nova.

01. At first glance the tailpanel didn’t look that bad, but when we were doing the driver-side quarter-panel we realized there was a ton of filler in it and more than a small amount of rust.

02. To replace the panel, we first had to get the bumper out of the way. Hot Rod Specialties’ Joel Rode removed it and put it safely aside.

03. And, of course, the taillights had to vacate the Nova. This panel is a bit unique as the opening for the lights is a combination of the tailpanel and the quarter-panel. For this reason it’s important that the parts line up correctly.

04. It was now time for some fun with power tools. We tackled this panel the same way we did with the quarter: large sections were cut away then we carefully trimmed off the edges. A cutoff wheel made quick work of most of it.

05. The brazing of the Nova’s trunk catch bracket was a clue to past bodywork. These two spots were cut away from the tailpanel.

06. An air chisel quickly cut the panel away from the lower section. It’s loud, but it’s fast and low mess.

07. We could then remove the main portion of the tailpanel from the Nova.

08. Joel then worked his way around the perimeter and carefully removed the edges of the old tailpanel where it met up with the quarter-panels and trunk gutter side braces.

09. The bottom of the tailpanel’s flange was attached to the lower panel by a line of factory spot welds. A spot weld bit works best for this, but in a pinch so will a large drill bit.

10. With the spot welds drilled out, we could then use a chisel to separate the two pieces of metal.

11. Here’s the new tailpanel (PN 900-3068) from Auto Metal Direct (AMD). It certainly looks great and the edges are crisp and clean. The reason for the crisp lines is that AMD makes the panels with new tooling and they use heavy-gauge steel. It showed up with a black EDT coating.

12. With both quarter-panels on the Nova, and the trunk gutter side braces in place, it was impossible to get the new tailpanel where it needed to be.

13. Our solution was to remove the trunk gutter side braces and replace them with new ones. This actually ended up being easier since the trunk weatherstrip channel is really hard to separate cleanly anyway.

15. With the side braces out of the way, it was easy to get the new AMD tailpanel into place.

16. On the initial test-fit everything lined up well with the existing sheetmetal. Once we were satisfied, we removed the panel and ground the EDT coating off the edges where we would be welding.

17. With the panel back on the car, we secured it in place with a combination of locking pliers and Cleco fasteners. If you’ve never used Clecos, give them a try sometime. They are a great way to hold panels together for welding and are super easy to use with a pair of Cleco pliers.

18. Joel started working his way around the edge of the new AMD panel with his Lincoln MIG welder.

19. Once the tailpanel was secure, he welded the new trunk gutter braces in place.

21. Here you can see the passenger-side trunk gutter brace in place. In addition to completing the channel for the trunk weatherstrip, it also ties the tailpanel into the quarter and strengthens the rear of the Nova.

22. With the bumper installed, we put the taillights back in and were very happy when everything fit just like factory. The welds were ground down a bit and the area was shot with some primer to protect the bare metal. This area is now ready for final bodywork and for some seam sealer in the trunk weatherstrip channel.

23. And here’s the back of our Nova finished and looking great with its body filler-free tailpanel installed. We would also like to note how well it lined up with the AMD trunk lid (PN 850-3068). Looks like it’s time to finish the bodywork on this Nova and get it into the paint booth.