Out With The Old: You don’t have to be a pro to install a new quarter-panel on your classic Chevy 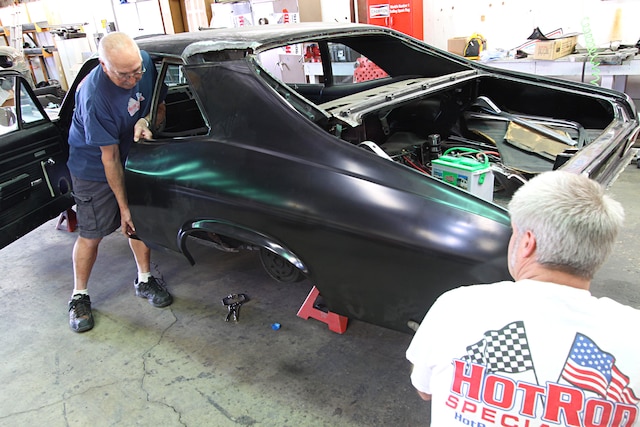 Part of what makes our Chevys cool is that they’re old, built in a simpler time when style outweighed CAFE standards and before the overuse of plastic. Of course, that’s also what makes them a lot of work to bring back into tip-top shape. Think about it. Was a Chevy built in 1969 meant to still be on the road today? Uh, no. The idea was Chevy would build a car, said car would be driven until worn out and then the customer would buy a new Chevy. Little did they know that their iconic designs would be as popular, if not more so, in 2016 as they were when new.

Which brings us to our two main problems: time and Mother Nature. These two forces conspire to turn once-pristine steel body panels into metallic “Swiss cheese.” Add in over four decades of fender benders and you start to see that it’s pretty hard to find an inexpensive classic Chevy that won’t require quite a bit of TLC to get it looking good again.

Case in point is Joel Rode’s 1969 Nova. Sure, he was able to buy it cheap, but the low cost of admission meant that he needed to invest some sweat equity to fix its time-tired problems. At the top of this list was a battered and beaten driver-side quarter-panel. It had taken some hard hits and was given a backyard repair job so bad that Joel determined that it would be easier to just replace it. He also wanted to install a full panel since the end result would be so much nicer than a quilt of patch panels. Now, Joel had never tackled a full quarter, but he was up for the challenge so we thought we would follow along to see how someone adept at building hot rods (he owns Hot Rod Specialties in Upland, California), but a novice at bodywork, would fare at slinging sheetmetal.

01. At first glance, the quarter didn’t seem that bad, aside from the glaring wrinkle, but there were a lot of issues hidden by more than a quarter-inch of body filler, including a large, and rather poorly done, repair. Given all of this, the best option was to just replace the quarter.

02. Joel Rode, owner of Hot Rod Specialties in Upland, California, got started by removing the rear and quarter-window glass.

03. Next up was removing all the trim and the brightwork along the driprails.

04. Joel then got to work with the grinder on the areas where the quarter met the rest of the car. What he found was considerable amounts of body filler.

05. A wire wheel was the easiest way to strip off the old paint and filler. Just be sure to wear safety gear since the bits of wire thrown off can hurt. Ask us how we know.

06. Joel then used a cutoff wheel to remove the bulk of the original quarter-panel.

07. With the main section gone, Joel could concentrate on the edges and make sure he didn’t cut off too much. A lot of this was done with a smaller cutoff wheel and patience.

08. Where possible, Joel used a spot-weld-cutting bit to weaken the factory spot welds. Buy a couple since they tend to break every now and again, especially if you only have one.

09. With the spot welds cut through, we used pry tools (or screwdrivers in some cases) to separate the old quarter-panel flange from the rest of the Nova. We also used this same procedure for the spot welds around the doorjamb striker and where the roof met the quarter.

10. After hours of careful trimming, we had all the bits of the original quarter-panel off of the Nova. This is the area near the back corner where the trunk meets the quarter near the tailpanel.

11. And here’s where the roof met the quarter. The holes are from drilling out factory spot welds. This seam was filled with lead, so Joel used a torch and wire brush to burn it out. When melting out lead, use a respirator since the fumes aren’t even close to being good for you.

12. Behold the Nova with the quarter gone and all the edges cleaned up. We also decided this would be a great time to give the bare, inner metal a coating of rust inhibiting spray paint. This is the point where we would have replaced parts like the wheelhouse and trunk extension, but ours were fine. Gotta love rust-free, or at least low-rust, Southern California cars.

13. We were very happy with the new quarter-panel (PN 700-3068-L) from Auto Metal Direct (AMD). The lines were crisp, and it certainly looked better than the mess we had cut off the Nova. The reason for the crisp lines is that AMD makes the panels with new tooling and they use heavy-gauge steel. It showed up with a black EDT coating.

14. Near the lower area of the C-pillar, the factory had a brace that was coated in some sort of foam rubber. This helped support the section of quarter-panel and give the area more strength. Before installing the new quarter, we applied a generous bead of automotive caulking. This will form to the quarter once installed, and after it dries will provide the same support as the factory stuff.

15. We had test-fitted the quarter earlier, but now it was time to put it on for good. And yes, it’s much easier with two people.

16. A combination of self-tapping screws and locking pliers were used to hold the quarter in place and get it adjusted to the car perfectly.

17. Having a variety of locking pliers on hand made things easier. This is where the upper flange of the trunk, just below the rear window, met the quarter.

18. And here’s where the new quarter met the roof.

19. In the interest of honesty, we’ll admit that we forgot to drill the flanges on the quarter before putting it in place. These holes are necessary for the numerous spot welds needed, and drilling them with the panel on the car was much harder. Lesson learned.

20. This is the new AMD quarter-panel clamped and screwed into place. At this stage we went around and made sure all the flanges lined up properly in preparation for welding. The panel fit the Nova great and matched up to the door perfectly. The body line was also true to the rest of the car, which will save us future bodywork.

21. Before welding, we used a body hammer to gently smooth out the panel-to-roof flange and secured it with a few more self-tapping screws.

22. Joel then started welding with his Lincoln MIG. The nice thing about sheetmetal is that you don’t need a large, or expensive, welder to get the job done.

23. Here you can see the top of the trunk area welded to the new quarter and the spot welds along the back glass channel. Later, this will all be ground smooth and prepped for paint.

24. This is the where the quarter met the rear tailpanel after the welds were ground smooth in preparation for paint.

25. This is the result after grinding down the welds where the C-pillar met the roof. The key to welding this section is to go slow and let the panel cool down a bit (or use compressed air to cool it down). If you get the panels too hot they can warp, creating extra work.

26. Here’s where the panel overlaid the door striker brace. This area was spot-welded and then ground smooth. It’s also the only place on the new panel that didn’t line up with the Nova. The hole for the striker was a bit lower than the hole in the new panel so we had to enlarge it just a touch. This is most likely a fault with the Nova more than the panel, since we imagine 40-year-old cars vary a bit from one to another.

27. And we can put this project into the “done” category. Overall, the new panel looks and fits great, and Joel is pretty happy with his efforts considering this is the first full quarter he’s ever replaced. The project isn’t super difficult, but it does require attention to detail and patience along with a willingness to try something new. As a bonus, Joel saved a stack of cash since he didn’t have to pay a body shop.