How to Replace the Toeboards of a 1964 El Camino

Board Meeting: Adding new toeboards to the fresh floorpan in a 1964 El Camino 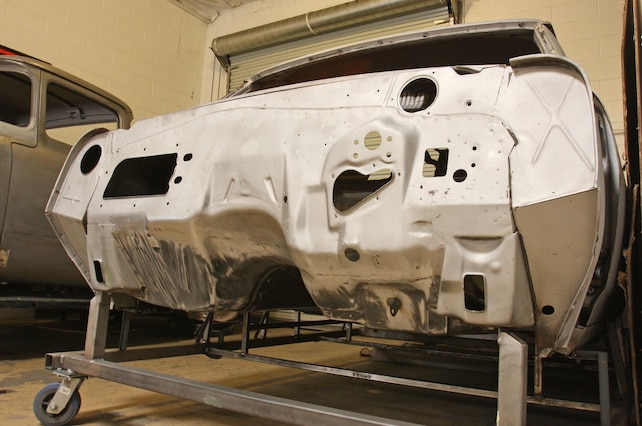 Floorpan replacement owing to rust damage can take many forms—not all of them satisfactory; from riveting old road signs to what remains of the stock floor, laying a fiberglass mat over the rust, or splatter-welding galvanized sheet in place. To do the job properly requires replacement panels, a decent welder, and an understanding of how the body panels go together … and come apart.

We’d already replaced the full floorpan in our 1964 El Camino, but this doesn’t extend forward into the toeboard area. While this might seem odd, if you think about it, there has to be a seam somewhere between the floor and the firewall, and this seam is directly under the occupants’ feet. Sure, repair panels are available that encompass the front section of floor and the toeboard area, but not only did we need to replace the entire floor, but if going to this extent with a restoration, we wanted the original body seam in place upon completion.

We sourced replacement toeboard panels from Ground Up—remember, El Camino floor and front end sheetmetal is the same as that for a Chevelle—then laid them in place over the original toeboards. We’re big fans of only replacing the minimum metal required, and rarely use replacement panels in their entirety, trimming them to suit. However, with so many ribs in the passenger-side area, we elected to use the complete panel. The driver-side was trimmed so the join would be on the flattest areas, as well as below the factory firewall crease.

01. Looking down at the floor through the heater box hole in the firewall you can see the toeboard is rusted through just ahead of the seam between it and the floorpan.

02. Ground Up supplied a pair of Chevelle/El Camino toeboards. These fit very well, unlike some we’ve used in the past.

03. Before installing the new floor, we removed the original along the seam, allowing us to not only retain some rigidity in the firewall, but to provide a reference point of exactly where the seam and top of the trans tunnel should be.

04. Having decided to use the complete repair section, we laid it in place and scribed around its upper edge then cut just below this line, taking care not to cut into the front body mount pocket on the other side of the panel!

05. The spot welds attaching the toeboard to the front body mount pocket were drilled out using a spot-weld cutter.

06. For ease of removal, we cut around the front body mount pocket for now.

07. With the section covering the pocket removed, we could clean and treat the surface rust within.

08. As with the rocker panels, we used a rust inhibitor coating before closing this area off once again.

09. If you wondered why the last couple of inches of the cut were at an angle in the previous pic, here’s why; the top corner of the mount pocket is cut away, and a straight cut would have shown here, and been impossible to dress from this side after welding.

10. With the floorpan seam and the toeboard lip drilled for spot welding, the new panel was clamped in place, a Cleco was used to hold it against the overlap on the tunnel.

11. As we’ll be welding fairly close to a large hole (the heater box hole) in the firewall, we clamped a couple lengths of angle steel along the firewall to reduce chances of warpage.

12. From the outside of the firewall we used an air hacksaw to cut along the edge of the stock sheetmetal, trimming the overlap from the new panel. Harbor Freight panel clamps were added every few inches to retain alignment for butt-welding.

13. With the welds dressed, this section is as good as new.

14. Here’s what it looks like from the inside, with spot welds still to be dressed.

15. On to the driver side. This followed exactly the same process, with the exception of making the upper join a few inches lower than the passenger side, simplifying alignment and dressing of the welds.

16. Never throw any old panels away, no matter how small, until a job is finished. This little bracket was swapped to the new toeboard, spot-welded from inside the cab.

17. Both toeboards welded in place. Here you can see how much lower the upper joint is on the driver-side panel.

18. Looking through the steering column hole in the firewall, the spot welds on the floor/toeboard seam were ground smooth before the whole floor was sanded using a DA with 180-grit discs.

19. While the majority of the internal bracing has now been removed, with just the door X-brace to go, we’ll leave it on the wheeled frame while we tackle the bodywork.

Chevrolet El Camino Celebrates 55th Anniversary. The Unmistakable Chevy car-truck still has a cult following. The optional SS model of the 1960s and 70s made it an iconic muscle car.