Floor It! Proper bracing is important when installing new floorpans in a 1964 El Camino 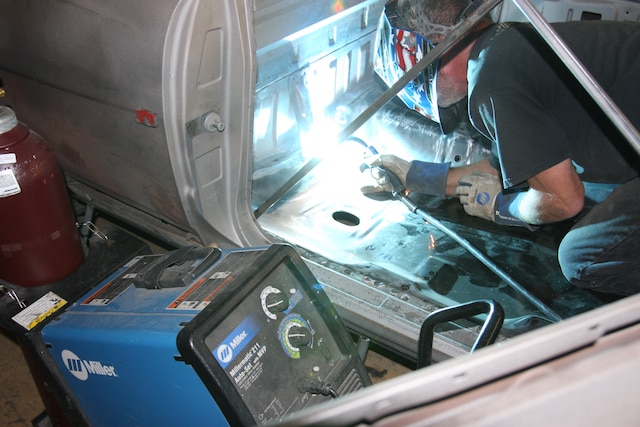 While most of the country, or even the world, is envious of the “rust-free” status of old cars in the southwestern states, the truth is, after half a century of sitting, even they aren’t all that great. Take this 1964 El Camino for example; it sat in the same spot in a SoCal backyard, nowhere near the ocean, for close to 35 years. We knew on first inspection that it would need floorpans, toeboards, and some work on the lower rear quarters and cab back panel, plus we suspected the lower windshield channel would be rusted. After having it mediablasted though, rust was discovered in the rear glass channel, tailgate returns, door corners, rear wheel arches, and even the roof.

We should mention at this point that although we’re dealing with an El Camino, the exact same floor is used in the Chevelle, and the following procedure is exactly the same, albeit without using the lower divider and bed support panels.

Tackling the biggest job first, we looked at the floor. Whilst each quarter of the floor is available as a repair panel (which is probably the best way to go if you don’t want to separate the body from the frame), as are the under-floor crossmembers, we elected to replace the whole floor, available as a complete assembly with crossmembers and inner rockers, from Auto Metal Direct.

Obviously not a small undertaking, as so much body structure would be removed at once, bracing it to retain its shape is extremely important. We fabricated a jig on wheels that was used to transport the body to and from the mediablaster then used, with extra bracing, throughout the project.

You’ll see as we progress that a two-post lift was used to make working under the body easier, and to lower the body down over the new floor. However, if you’re confident in your welding and bodywork abilities and wanted to tackle such a project at home, there’s no reason it couldn’t be done using floor jacks, tall jack stands, engine cranes, or a gantry crane.

01. After removing the El Camino’s body from the frame, we fabricated a jig that could not only be used to transport it to the mediablaster but would also support the body while the floorpan was removed and replaced. Note the section that bolts to the body mounts under the floor is removable, providing access for the new panel.

02. A Sawzall made light work of cutting the floor out, just inboard of the spot welds joining the floor to the rockers, across just behind the toeboard seam, and parallel to the lower divider panel at the base of the rear of the cab.

03. The center of the floor was then removed in one piece, complete with the removable section of the jig. Note that we’d also braced the inside of the body prior to the floor removal using thick wall 1x1-inch steel tying the lower hinge points on the A-posts to each other and to the B-posts.

04. With the spot welds on the lower divider panel drilled out and the panel removed, the bed support panel and floor in the “smuggler box” could be accessed. Yeah, more rust, and we’d have to fabricate the lower edge of the cab rear panel as repair sections for 1964s are unavailable.

05. Before going any further, taking into consideration just how much of the body’s structure would be removed (and how much of what was left was rusted, such as an under-bed crossmember), we added more bracing, tying the complete lower and partial upper edge of the rockers to the jig, as well as cross-bracing the door apertures.

06. The remainder of the floor and bed support panel was then removed, cutting close to the edges using the Sawzall.

07. We could now concentrate on removing the “edges,” mainly involving drilling out spot welds then using a cold chisel to free the sections.

08. Looking at the backside of the driver-side wheelhousing, with all the unwanted metal removed, with the exception of the inner rocker, this is what it looked like.

09. Looking up into the passenger-side wheelhousing, the mediablasting had revealed some rust issues. We first drilled out the spot welds holding the smuggler box cover brace and removed it.

10. The rusted areas (those inside the Sharpie lines) were cut out …

11. … and replaced with fresh steel before welding the brace back in place.

13. Mediablasting is a great way to strip old paint, filler, and rust, but is also a great way to fill boxed sections with media grit, in addition to what’s already collected there over the years. If you won’t have access to such areas, try to mask them off or at least blow them out as best as possible.

14. We like to use internal frame coating on any areas, such as inside rockers or between panels, where we won’t have access to later to prevent further rust.

15. Before welding the floor in, and while we still had easy access to the area from underneath, we fabricated the lower couple of inches of the cab rear panel. The length of angle is used to keep the panel straight during welding.

16. With the lower section of the cab back in place, we plug-welded the original angle section to it and screwed the smuggler box cover in place from above.

17. While floor repair panels are available in sections, considering our El Camino would have needed all of them, it made sense to replace the entire floor with one panel. This one, from Auto Metal Direct, is supplied with all the crossmembers in place, as well as inner rocker panels and a bag of associated brackets.

18. As the floorpan is intended for a Chevelle, it comes with rear seatbelt anchor points. We drilled out the spot welds holding these in place, cut some blanking plates, and used the spot-weld holes to plug-weld them into the recesses.

19. We removed the jig framework from the old floor section and bolted it to the new floor, placing the assembly on a wheeled dolly we use for moving pickup beds around the shop. The body was then lowered down over the floor using a two-post lift.

20. The new floor fit like a glove, and with it supported on the framework, the lift was raised in preparation for plug-welding along the lower lips of the rockers and around the wheelhousings.

21. Next, the floor was plug-welded along the rocker panels in the door shuts. Note that we sanded the edges and rear of the floorpan with 180-grit discs on a DA sander prior to installation. You’ll see why later.

22. Before continuing, we removed just enough of the bracing to enable us to re-fit the doors, to double-check that the body hadn’t sagged or otherwise moved during the whole process. Thanks to our (probably over-the-top) bracing, the doors fit perfectly with even gaps all around.

23. Again using a length of angle to keep it straight, we plug-welded the floor support panel in place, while it was bolted to the smuggler box cover to ensure it was positioned correctly. The reason for sanding the panels should be clear now; imagine trying to access then sand all this after installation!

24. We used a step drill to drill the plug weld holes in all the panels prior to setting them in place and a Millermatic MIG welder for all welding.

25. With the smuggler box cover removed, this is what it looks like, with the support panel and the divider panel welded in place.

26. AMD supplies all these brackets and tabs along with the floorpan. While they’ll be needed if you’re installing the floor in a Chevelle, the only ones required in an El Camino are the wiring harness tabs at lower right.

27. We drilled holes in the bare metal end of each tab and plug-welded them along the channel in the floor where the harness runs, copying the stock positions on the old floor. Quenching them with a rag soaked in cold water immediately after welding prevents the plastic-dipped end from melting.

28. Looking from underneath gives some indication of how the new panel was welded to the wheelhouses and the end of the rockers. All welds will be cleaned up prior to sealer being brushed into every seam, as per original.

29. Jumping ahead a little, as the toeboards are in place here (we’ll cover that next), here’s the completed floor.

Chevrolet El Camino Celebrates 55th Anniversary. The Unmistakable Chevy car-truck still has a cult following. The optional SS model of the 1960s and 70s made it an iconic muscle car.

» Read More
The Too Fat Follies

Where did the notion come from that adding more fuel to an engine makes more horsepower? It’s one of those automotive myths that clings to life even in the new millennium.

Check out the 2001 Best Chevrolet Picks, brought to you by the experts at Chevy High Performance Magazine.