Working With Waterborne Paint is Easy if You Follow These Guidelines

Let It Rain: The basics of working with waterborne paint 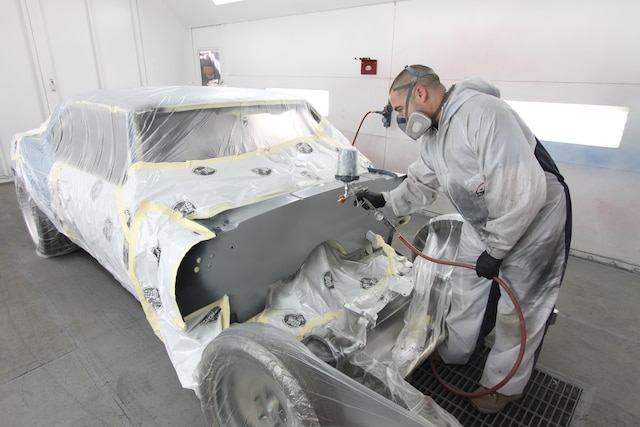 With the push toward “greener” ways of doing things, especially in the automotive world, more and more shops are moving to waterborne paints, and in states like California this move is pretty much mandatory. Of course, some painters were resistant to the change, but once they gave waterborne paint a try they found the end results were just as good as the solvent-based paints they had been using.

In truth, waterborne paint isn’t a new technology and has been around for well over a decade. Most new cars are painted this way, and in many other countries water replaced solvent years ago. The Cromax Pro we’re using is Axalta’s third generation of waterborne paint.

Keep in mind that, so far, only the basecoat is water based. All the other contents—such as the primer, sealer, and clear—are the same solvent-based formulas you’re used to. The other interesting part is that waterborne basecoats aren’t all water. Water replaces a large part of the solvents, but some solvent (around 10 percent) remains in the paint. This mixture of water and solvents act as a carrier to move the pigment from the spray gun to the surface. The water and solvents then evaporate, leaving behind the pigments and resins that give a car color. The processes and techniques employed between the two systems are very similar, it’s just that one sheds far fewer chemicals into the atmosphere. Specifically, waterborne paints give off almost 90 percent less VOCs (Volatile Organic Compounds) compared to solvent.

The main difference between water and solvent is in how the two evaporate. The key with water is humidity while solvent is driven by temperature. It’s a bit ironic that the older cross-draft booths are better than the newer downdraft types that everyone longed for. The reason is that as the water evaporates from the paint surface the air molecules near the surface become saturated and can’t hold more water, slowing the process. If air is kept moving across the surface that is drying, the saturated air is constantly being replaced with non-saturated air.

The equipment needed to switch from solvent to waterborne paint is fairly minimal. To resist rust, spray guns should be stainless, and while fans help speed up the drying process, they are not mandatory. And just like solvent, you’ll want to make sure your compressor is putting out clean air. The Axalta paint we chose is also quite a bit different from other waterborne paints on the market. The Cromax Pro uses a wet-on-wet process instead of the coat-flash-coat method called for by other brands. It also has a higher solid content—the stuff left behind once everything evaporates—of 20 percent compared to 15 percent in other brands. In short, this means less covers more.

This time around we were doing some work on a Camaro that had already been painted. The first task was painting the black firewall body color, and the second part was repainting a panel that had a flaw in the original finish. Follow along as we head over to Best of Show Coach Works in Escondido, California, to watch them work with water.

01. All good paintjobs start with good prep work. On this Camaro, we decided to paint the firewall body color and we had to repair a panel where the previously applied paint developed a small bubble.

02. The bubble on the back panel was most likely caused by some contaminant getting on the surface before the paint or sealer went on. Fortunately, this panel was easy to isolate from the rest of the car since we used the seam lines for a clean break. Before grabbing the paint gun, we went over the panels with a tack cloth.

03. Best of Show’s Derrick Parobek then started outlining the areas to be painted in some 3M fine-line tape. This specialized tape is used to ensure a clean edge since it doesn’t let paint seep under it.

04. Building out from the fine-line tape, Derrick then laid down strips of masking tape.

05. This process was repeated around the perimeter of the firewall.

06. Eventually, this was the result.

07. The wider masking tape gave an easy spot to apply the paper and tape to cover the rest of the car.

08. The process was repeated at the back of the car to tape off the panel that we repaired.

09. To cover large sections, the best product is thin plastic sheeting. The area was first covered, and then a window was cut out to expose the area requiring paint. The edges were later taped to the paper applied earlier.

10. Here’s the front of the Camaro ready for paint. Also note that we used masking tape to seal up any holes in the firewall.

11. The rear panel was prepped in the same manner.

12. Since waterborne paint relies on air movement to dry, there are several cool tools that make painting with it a bit easier. One is this air nozzle that creates a curtain of air to help move air over the surface and speed up evaporation.

13. In waterborne paint, only the color (pigment) coat is water based, the rest of the system, such as the sealer and clear, is still solvent based. Even so, waterborne does require a stainless gun to take rust out of the equation. For this job we used an Iwata stainless LPH400 gun. The orange tip is for basecoats and sealers. Expect to pay between $400 and $500 for a quality gun. The tip, or air cap, will set you back another $130.

14. The body-worked areas then received a coat of Axalta (formerly DuPont) Premier Sealer (mixed at a ratio of four parts sealer to one part reactive reducer and one part activator reducer). Axalta has come up with a system for their sealers called Value Shading. The theory is that three dimensions describe a color: hue, saturation, and value. Hue describes the dominant wavelength or “color” (e.g., green, red, or blue). Saturation describes the purity of the color, or how much the color has been diluted with white. Value, or tone, describes the brightness or darkness of the color. Value is the element of color that most controls the number of coats needed to achieve full coverage. The Value Shade for our particular color of blue turned out to be four.

15. The paint we used consisted of a host of products from Axalta. This included their Cromax Pro line of paint along with all the needed reducers and products for the clearcoat.

16. When paint sits around for a time it can separate, with the pigments settling to the bottom of the can. Derrick prefers to stir waterborne paint since he feels the shaker introduces too much air. The color for our Camaro, off of the Spectramaster Color Atlas, has a code of CAS471. Keep in mind that the color you see on the tiny 1-inch square chip may not look the same as when it’s covering an entire car, so spraying out a test panel might be a good idea.

17. We then added some Cromax Pro (PN WB2045) desert controller to the paint. We shot this car in the winter, but since our paint booth is heated, we didn’t have to switch to a different controller. Oh, and the desert refers to humidity, not temperature.

18. It was then time to spray on some color. Remember that what comes out of the gun will not look anything like the color you wanted, especially the first coat.

19. Derrick then laid down a nice coat on our sealed firewall. Our plan called for three coats with a very short break between each.

20. Waterborne differs from solids in the way it changes shades throughout the drying process. Notice the color difference between the wet area in the center and the drier area around the edge of the panel. Cromax Pro utilizes a wet-on-wet application process. What this means is that there’s no need to let the first coat of color “flash” before shooting subsequent coats. Also, due to a higher solids composition, you can achieve full coverage in as little as one and a half coats. Even so, we decided on three coats of color.

23. The clear was laid down just like the paint.

24. After each area received three heavy coats of clear, our project was done and left in the heated booth overnight to dry.