How to Install a New Roof on a 1971 Chevrolet Camaro

Raising the Roof on a Classic Camaro 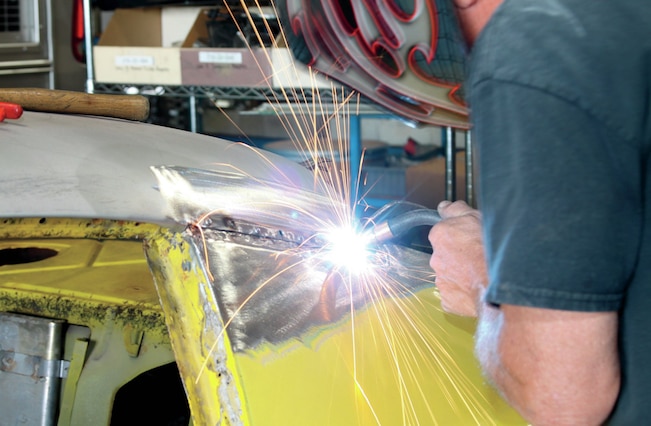 The aftermarket has been kind to our beloved Chevys, especially the more popular models like the Camaro. There was a time when replacing something like a roof panel meant digging through wrecking yards looking for a donor with one in better shape than the one you were trying to repair. It was tedious and frustrating work. Today, finding a high-quality replacement part is just a phone call or mouse click away. In this case, we had a fairly solid ’71 Camaro, but salt air near the ocean had caused rot in the areas above the front and rear, especially, glass. And while we could have patched up the rust, it’s actually easier to just replace the roof.

In addition to the cost of the roof panel, make sure you factor in the cost of supplies. To do it right, you’ll need some air tools, body working tools like a hammer and dolly, a MIG welder, an assortment of cutting and grinding wheels, and a variety of locking pliers. If you’re going to pay a shop to do it, expect the labor to run between 9-12 hours, depending on the car’s overall condition .

01. We decided to start at the A-pillar and work our way around. We’ve found that the best way to address this project is to cut away the majority of material and then trim our way outward until we’ve removed the whole roof. Remember, if you cut away too much you’re going to create a lot more work for yourself. For this reason, this cut was made well above to where we will eventually trim.

02. It was then time to attack the C-pillar where the roof met the quarter-panel. Before doing any cutting we used a grinder to find the factory seam. Our roof was original, so the seam was filled with lead. We used a torch and a wire brush to burn it out, and since lead is pretty bad for you we used a respirator. We then utilized an air chisel to cut a line just above the factory seam; a cutoff wheel would have worked as well.

03. We then cut along the edge were the roof met the upper rear window flange. Given the rust issues here, cutting was easy.

04. The procedure was repeated along the upper front windshield flange.

05. The edge where the roof meets the door is folded over, in much the same way as a doorskin. Here, we found the easiest way was to use a grinder to cut through. The leftover flange will be removed later.

06. It turns out that a roof replacement on a first-gen Camaro is way easier than on a second-gen. The reason is that on second-gen Camaros there’s also an inner roof panel, and the outer panel we wanted to replace was glued to the inner one. For this reason we had to remove the outer roof in sections. First up was a cut down the middle.

07. And here’s the first section we removed. If you look along the inner edge you can see some of the factory adhesive. To separate the glue spots from the roof we used a sharp scraper and a hammer.

08. We were able to remove the roof in six sections.

09. With the main roof gone we then removed the sections above the door glass and then trimmed away the last bits along the edges.

10. For the flanges above the front and rear glass, we use a drill to break the spot welds and then the air chisel to finish the job.

11. The C-pillar area required a lot of grinding and work to get it “right” enough to work with the new roof panel. The key here was patience and a couple test-fits of the new roof.

12. Next up was prepping our new roof (PN E384W, $339) from Classic Industries. We used a hole punch to put spot-weld holes along the window flanges (you can use also use a drill). We chose the roof from Classic with its new Weld-Thru coating instead of the standard black EDP coating.

13. Before slapping on the new roof we gave the rusty inner roof a heavy coat of Eastwood Rust Encapsulator. Hey, with any luck it will be long time before this area is ever seen again, so it’s nice to know the metal is protected. We also used our grinder to knock down the original glue bumps a bit.

14. In keeping with how the factory did it, we decided to use a little 3M All-Around Autobody Sealant (PN 08500). This will squish down and provide the same support the factory glue did. The sealant was applied to the top of each existing glue bump.

15. The new roof from Classic was then set in place before the 3M sealant set up. A lot of locking pliers were used to clamp the panel in place at the front and rear window flanges.

16. Here you can see where we decided to the join the roof to the front A-pillar.

17. We drilled the new roof panel along the C-pillar flange in preparation for welding and temporarily held it in place with some self-tapping screws.

18. As we said, the roof edge, along the sides, attaches like a doorskin. Using a hammer and dolly we carefully folded the edge over in stages. This is where having a little bodywork experience comes in handy.

19. The roof was tack welded along the front and rear window flanges.

20. Next up was MIG welding our new roof to the A-pillar.

21. Once we ground down the weld we were happy with the result.

22. Here’s a close-up of the spot welds along the rear window flange. The rust that infected this area is now a distant memory.

23. The last area to be welded was the roof to the quarter-panel C-pillar. The process was to tack every few inches, remove the screws, and then finish welding the entire seam.

24. To lessen the chance of warpage, the seam was done as a series of tack welds where we let the area cool a bit in between. Here’s the final result.

25. A 3M grinding disc was used to knock down the welds.

26. This left us with a fully welded seam ready for body filler.

27. And just like that we were done. The whole job took a solid 10 hours to do and we went through just over $100 in supplies, in addition to the cost of the new roof panel.