How To Clay Bar Your Classic Chevy - Turning Grime Into Shine 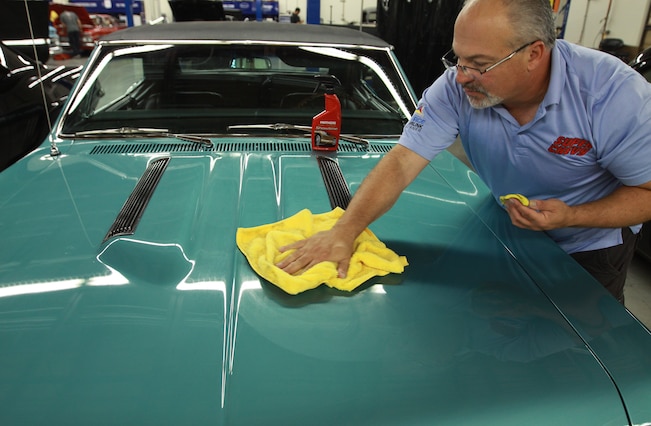 It was a project that proved no car is too far-gone to be brought back to life. If you search “AMD Chevelle” on superchevy.com, you’ll find multiple listings for our 1967 Chevelle SS396, and you’ll discover restoring the Super Sport to its present appearance was a massive undertaking involving the replacement of almost every square inch of original sheetmetal.

Auto Metal Direct’s installation and R&D center, C. Hopkins Rod & Custom (Commerce, Georgia), delivered the absolutely stunning completed car that made its public debut at the SEMA show in 2012. Once the stunner was at our shop in Tampa, we rebuilt the smog motor 402 under the hood, to the tune of 411 horsepower from 413 cubes (utilizing ported factory smog heads and a 360-horse 396 intake. With only a couple of hundred miles under its belt, the AMD Chevelle was off on the 2014 Hot Rod Power Tour, where it performed flawlessly, racking up over 1,500 trouble-free miles.

That’s where our story begins. The Chevelle was returned to Southern California at Super Chevy’s new home in Irvine with an unhealthy coating of road grit and grime baked onto its finish. Left on too long surface contaminants such as bug guts, and splattered bird excrement can do irreversible harm to a painted surface. Add deeply imbedded rusting iron particles, airborne contaminants, along with hardening tree sap, and it’s only a short matter of time before permanent damage is done.

The staff at Super Chevy feels very fortunate to have such an immaculately restored example in our project fleet, and before we begin the next round of tech upgrades, the very first thing we had to do was get this puppy cleaned up. The first order of business was is typically a good hand wash, but due to water restrictions during California’s drought, we just used Showtime and the clay bar on our filthy beast. The Clay Bar kit removed all the contaminants from the paint. Run your hand over the finish before and after the clay bar treatment and you won’t believe the difference.

01. The Super Chevy AMD Chevelle on its first outing since its move to Southern California. We employed Mother’s Clay Bar kit, which uses a clay bar and its Showtime detailer to remove harmful contaminants from your classic’s paint. We had to spruce up the A-body before its hundred mile round trip to Fontana for the NMCA West Street Car Nationals.

02. Good like borsch, Mothers clay bar kit comes complete with two chunky 160-gram clay bars, a high-quality microfiber towel (much thicker and plusher than the cheapies you buy in the big box stores), and a 16oz. spray bottle of Showtime instant detailer.

03. Fresh from the Hot Rod Power Tour, the AMD Chevelle came to us with an Audubon sampler kit of sun cured bug guts in the grille. In this application, Showtime worked great to dissolve and dislodge the stubborn skeletal remnants.

04. After allowing the Showtime to soak in for a few moments, we used a Mothers detailing brush to whisk away the grime.

05. Before the grime dried we followed by buffing the chrome completely dry with a Mothers microfiber towel until it exhibited a brilliant luster.

06. The chalky nature of this potentially caustic bird dropping emulsified rapidly with a spritz of Showtime. We followed by buffing dry with a microfiber towel.

07. Mothers Showtime instant detailer doubles as the clay lubricant. Ensuring the AMD Chevelle had been washed directly prior to claying, Mothers Showtime was sprayed liberally onto a (cool surface only) 2-3 square-foot area.

08. Before initial use, we flattened the clay bar and then moved it across the surface in a repetitious front-to-rear motion. As the clay does its job, the paint will have increasingly less embedded particles and less drag will be felt.

09. Here’s visual proof clay does a miraculous job of extracting embedded particles. Running one’s hand over the surface will feel smooth to the touch and a microfiber towel will glide freely.

10. With the surface still wet with Showtime we buffed the clayed area dry. Areas where the microfiber towel still drags should be done (clayed) again.

11. Mothers clay bar also works great to remove paint overspray and unlike rubbing compound will not leave swirls or burn through the paint.

12. Mothers does market products made specifically to clean and dress wheels and tires, but because Showtime worked so well to clean bugs from the grille we experimented with it on brake dust covered wheels.

14. Free at no extra charge a gratuitous money shot, sans a human hand. Before driving to Fontana, we had to throw a coat of wax on the now unprotected finish, but that’s a web story for another day.