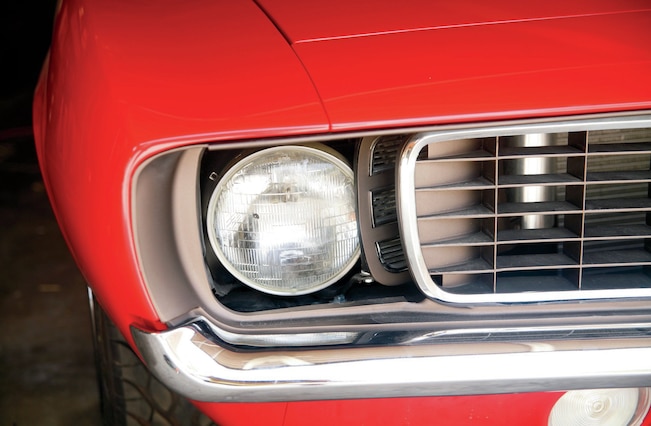 Many first-gen Camaro fans would agree that the Rally Sport grille and its hidden headlights looks better than the standard grille, but in order to get that look, Chevrolet fashioned a complicated electrical and vacuum system to open the doors when you turn on the headlights. Not only was it unreliable after a few years on the road, but because it was dependent on vacuum to operate, as soon as you stuck a real cam in the engine and killed the idle vacuum, the doors would operate sporadically, if at all. We’ve known more than one hot-rodded Camaro RS owner that just got used to forcing the doors open by hand when he or she turned the lights on. And that’s a pain in the neck.

Detroit Speed is obviously no stranger to Camaros, with a full line of top-shelf suspension components and other goodies for the car, and they have also developed a modern fix for the troublesome RS headlight situation. They replace the bulky, heavy, and often nonworking actuators with electric motors that open the doors quickly, smoothly, and most importantly reliably, every time.

Here’s the complete DSE RS Headlight Door Kit. At top is the control module that mounts under the dash and to either side are the electrical actuators and linkages. Notice the actuators are mirror images of each other—specifically for driver and passenger side. Also included is the wiring harness, Weatherpack connectors, grommets, and zip ties.

The kit consists of two mirror-image actuator motors, a module that mounts under the dash to control everything, and a simple wiring harness to hook it all up. The module has an integrated failsafe protection mode designed to protect itself in case there’s an electrical short in the wiring circuit. If a short exists, the module will make audible clicks telling you there’s a short somewhere and that the module has entered a failsafe mode. The actuators themselves are pressure-sensitive to reduce the chance of injury (like pinching your fingers if you happen to get them in the way of the operating headlight doors) or damage to the car if something gets caught in the way of the doors. The actuators also have a built-in clutch so you can still manually open the doors if you want to.

Installation is straightforward and not complicated, though it does require some time on your back under the dash to mount the module and do some simple wiring. If the car is already equipped with an RS grille and you’re swapping the factory actuators for the DSE system, remove the factory parts but leave the headlight door bellcranks in place, and make sure the doors open easily without binding. If they don’t, lubricate all the pivot points and check that the stock pivot shaft and bellcrank aren’t too tight.

Like all of their parts, Detroit Speed’s RS Headlight Door Kit is a quality-engineered system designed specifically for ’68 and ’69 Camaros, which is no surprise, since company owners Kyle and Stacy Tucker were both General Motors engineers before opening DSE. In other words, you know it’s done right. The kit costs $450 direct from DSE and took us a day to install, but that’s only because your author’s Achilles heel when it comes to working on cars is wiring. Like anything, now that we’ve done it once, it would be about a 3-hour install the next time.

Before reconnecting the battery and powering up the system, double-check all the wiring connections for continuity using a multimeter. Wrong wiring can permanently damage the system. Remember the red wire with the inline 10-amp fuse in the dash harness? That should now be connected to a constant 12-volt source, and make sure the fuse is installed. Reconnect the battery at this point and the headlight doors will cycle open and closed. Once it has cycled, turn the headlights on and off and make sure everything works properly. If not, the DSE instructions include a full page of troubleshooting tips.
3/22

1. The first step is to disconnect the battery. This is very important, because if you don’t you’ll most likely fry the system during installation.

2. The next step is to mount the module, which includes two bolts and clip nuts. The module mounts to the brake pedal support bracket under the dash. You have to mark and drill two 7/16-inch holes in the bracket to mount it.

3. Once the module is mounted, pull the connector off of the headlight switch and locate the blue wire, which is the 12-volt headlamp feed. Using a terminal remover or a very small flat-blade screwdriver, remove the terminal from the connector. We used an aftermarket harness, so the power wire was yellow in this case. On a stock harness, it’s blue.

4. This illustration shows the orientation of wires in the headlight switch connector.

5. DSE provides a new male connector for the wire terminal that was just removed from the headlight connector. Install this connector to the wire (the terminal snaps in place) and then connect this to the white female connector (with a blue wire) on the module pigtail harness included in the kit.

6. Also part of the DSE harness is this black wire and terminal. Connect it to the ground stud on the dash, right under the headlight switch. There’s a red wire with an inline fuse that must be connected to a constant 12-volt source, but that’s the very last step.

7. The white female connector you just installed the original headlight switch wire into in the previous step is connected to a terminal with another blue wire piggybacked into it. Insert this terminal back into the headlight switch connector where you removed the original blue (yellow in our case) wire. On this same DSE harness is a brown wire with a terminal; install it into the empty connector cavity as shown in the illustration. When using an aftermarket harness, like we were, this terminal may already be filled. In this case, the brown wire must be spliced into the park lamp signal wire (again, see the illustration). We used a crimp splice connector (not included in kit).

8. There are actually two different wiring harnesses in the DSE kit, one that we just installed with the headlight switch that plugs into the module, and another one that also plugs into the module but contains the long orange, yellow, green, and purple wires that go through the dash and up to the actuators at the front of the car. Feed these wires through the dash and run them along the top of the inner fender next to the stock lighting harness. A good way to feed the wires through the fender is to use a coat hanger. Feed the hanger wire through until you can grab it near the cowl, tape the wires to the hanger, and pull them through carefully. To get the wires through the dash, you’ll probably need to drill a 7/16-inch hole in the firewall (we suggest near the clutch rod hole) and use the DSE-supplied grommet to protect the wires. We had an existing hole and grommet that we could use, thanks to the aftermarket harness on this car.

9. Drill another 7/16-inch hole on the inner fender, just behind the headlight buckets. There will already be a hole and wires for the parking light on each side. We drilled the new hole right next to it. Remember to protect the wires with the included grommets. The orange and yellow wires should pass through the hole on the driver side. Route the green and purple wires along the factory harness underneath the core support to the passenger-side wheelhouse and pass them through the grommet.

10. Since the green and purple wires that go to the passenger-side actuator are much longer than the orange and yellow wires, DSE supplies a Weatherpack connector for just these two wires, to make them easier to pass through the firewall. Pass the green/purple wires that are connected to the module through the firewall, then install the included connector to the wires. The terminals push in and lock in place. Make sure to follow the instructions as to which terminal goes in which socket. The sockets are labeled A and B, as you can see if you look close. Purple goes in A and green goes in B. This then connects to the longer pair of green/purple wires that get fed through the inside of the fender in the previous step.

11. The wires you passed through the inner fenderwells then must be installed into the supplied female Weatherpack connectors. Again, read the instructions on which wire goes into which socket. These connectors will connect to the actuator motors once they’re installed.

12. If you’re converting a non-RS car to an RS grille, you’ll need to drill a few holes in the inner fenders to install the RS headlight assemblies and linkages in the car. Cut the template from the sheet and align it as described on the template. It can be used on both sides of the car by flipping it over. In our case, the car already had an RS grille so the holes were already there. In this case, remove the stock vacuum actuators but leave the bellcrank for the headlight door.

13. This is the headlight door bellcrank without the actuator, vacuum tank, hoses, and valves. The two bolts on the left hold the core support to the inner fender. These will be used to mount the new actuator.

14. This is an over-center-spring, which must be removed before the DSE kit is installed.

15. Install the DSE actuator with the cylindrical motor facing forward and the bellcrank down, as shown. This is the passenger side, looking toward the front of the car. The two bolts on the inner fender must be removed to install the mounting bracket. The inner bolt is a tight fit, but we used a ratcheting box-end wrench to get to it. The holes are slotted so that the actuator assembly can be aligned with the bellcrank.

16. This is the driver-side actuator orientation.

17. The linkage on the new actuators connects to the stock bellcrank. Remove this nylon bushing from the linkage and insert it into the bellcrank hole. Use pliers if it’s tight.

19. The driver-side actuator and linkage installed.