Easy Repairs and Improvements to Keep Your Corvette Cool … Inside

Easy repairs for a cooler cockpit 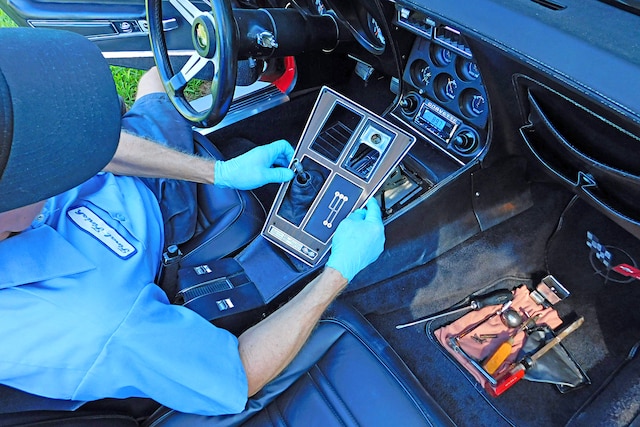 Corvette engines—small-blocks and big-blocks, alike—put out a lot of heat. A highly desirable mission is arresting the migration of heat from the engine compartment to the passenger compartment. Preventing heat from entering the cockpit is good for any Corvette, but is critically important on non air-conditioned ones. In this article we’ll look at repairing and/or improving a number of things to make your Corvette’s interior more enjoyable when cruising on warm days.

One often-overlooked problem area is the shifter boot. The culprit is not the pretty leather boot that you see; it’s the rubber boot that hides underneath. This rubber part frequently tears with age and then it’s like having a hair dryer on high blowing into your interior. Out of view under the shifter console, this virtual heat pump can go undetected for years.

The rubber grommets and seals on the firewall are usual suspects, too. The rubber shrinks and cracks with age allowing hot air to pass by. Fortunately, these and many other hard-to-find items for C1s through C4s are available from Paragon Corvette Reproductions.

Compared to other jobs, most of these repairs and improvements are easy, inexpensive and quick. Plus, reducing the heat seeping into your interior is not a massive project that once started sidelines your car until finished. You can do each item separately whenever a little time is available. Regardless of what generation Corvette you own, these tips show ways to keep your cockpit cooler. Vette

This inexpensive weatherstrip greatly reduces the amount of very hot air escaping from under the hood. Without this hood weatherstrip, hot engine air enters the passenger compartment via the cowl vents or windows.

It is not uncommon for the hood ledge weatherstrip to be missing after paint or body repairs, or when the hood has been changed. Center the weatherstrip and then glue the two flat sides to the hood.

3M Weatherstrip Adhesive is excellent for attaching weatherstrip. Paragon offers it in the yellow variety for originality and also in black, which is less noticeable. Tip: write the purchased date on sealants and glues so later you know how old they are.

Paragon offers a rubber fastener kit to replace the push-in fasteners that hold the insulation to the firewall. After many years, these rubber pieces become brittle and break, leaving holes in the firewall above your feet.

The clutch rod seal is not easy to see, but it’s worth inspecting. The frequent movement of the clutch rod combined with the engine’s heat and vapors shorten this part’s life. A tear is visible on this one and that results in hot air blowing on the driver’s feet and lower legs.

The clutch rod seal is installed on the firewall from the engine compartment side. After disconnecting the rod from the bellcrank and removing the adjustment nuts, the seal is slid onto the rod and is attached to the firewall by three screws.

Grommets comprised of a metal retaining ring with a thin rubber membrane are used on some models for the tachometer or speedometer cable. The flexible rubber stretches to allow insertion of the small end of the cable.

Corvettes use a plethora of different solid rubber firewall grommets. You won’t find most of these at your local parts store, but Paragon offers a sizable selection of reproduction grommets.

This original grommet is brittle and broken after 40 years living in a tough environment. A screwdriver helped to pry the broken pieces out of the firewall.

The new grommet is installed after a little finagling and the use of the screwdriver again. It took little effort to install this grommet because its flat side is out and it’s always easier to insert the chamfered end through the firewall.

Remove the shifter plate to inspect the rubber shift boot. Tip: gently tighten each screw before removing it. It is common for the console’s plastic tabs to be broken and it’s better to know this now so that you can make repairs when the shifter plate is removed.

An extra layer of insulation placed under the carpet or anywhere else in the passenger compartment works well to keep the temperature down. This white insulating material had been installed previously. Note that the console plastic tab is partly broken where it holds the left lower screw clip.

The old rubber shifter boot has a number of large tears. This hidden damage undoubtedly has been allowing very hot air into the passenger compartment for quite some time.

Remove the six screws on the shifter plate. A 5/16-inch swivel socket helped to access the forward two screws. Pry the flange up to break loose any sealer, and then pull the boot to the right, up and out.

Sealer was applied to the boot’s metal flange because it doesn’t always conform perfectly to the fiberglass. Press the left side down while sliding the boot to the left to make sure the two retaining clips are properly engaged. Tip: an ice pick helps align the screw holes.

Tip: apply leather conditioner or cream to the inner and outer surfaces of the leather boot to keep it supple and make it last longer. Some of the best conditioners contain lanolin (sheep skin oil) to moisturize the leather.

Removal of the ashtray door assembly was required to slide the new boot fully onto the shifter plate. Later, a little material needed to be trimmed from the boot’s outer surface to enable reinstallation of the door assembly.

Mark the screw hole locations on the boot after testing-fitting. Remove the boot and use a 1/8-inch drill bit to drill the screw holes from outside of the boot’s metal retaining ring. Tip: use drill bits marked HSS (high speed steel) for drilling into metal.

If you find an extra instrument light, it clips onto the cigarette lighter collar. It provides a little illumination to help get the lighter back in place at night. The clip is flimsy and often falls off when the shifter plate is reinstalled.

Slip the new leather boot over the shifter and insert the shifter plate fully down into the console. Don’t use the four screws to draw the plate down because the console clip tabs are fragile. Install the reverse lock out handle, spring and shift knob and the job is sealed.

Paragon’s Underbody Transmission Tunnel Insulator Foam Collar is another item to help keep the cockpit cooler. This can be pushed down over the bellhousing to reduce the amount of hot air passing through the transmission tunnel under the consoles.

We’ll finish with one of the easiest ways to insulate your Corvette passenger compartment: simply installing a carpet floor mat kit. Paragon offers these in plush cut-pile and in a number of styles and colors.