Follow These Steps to Restore Your C2 Corvette Heater

Global Warming: Restoring the Heater in a ’64 Corvette Coupe 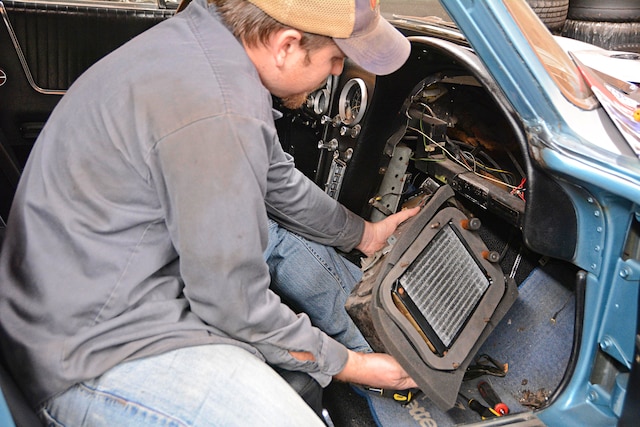 We’ve all been there—you’re just cruising along in your vintage Vette and you get a whiff of coolant. Then, you notice a drip in the passenger-side floorboard. The dreaded heater core leak is something no car guy wants to face, because it typically means a lengthy and complicated repair. A Corvette owner is no stranger to lengthy and complicated repairs, but this process is often the subject of great procrastination. The mindset of “we don’t drive it in the wintertime anyway” was in affect for longer than we care to admit.

After 30-plus years of having its heater core bypassed, this coupe deserved a heater system repair. The repair process didn’t cost a lot of money, but it did tie up several hours of garage time. We purchased a new heater core, blower motor and heater box seal kit, but the remainder of our investment involved wrestling with a fiberglass heater box in the tight confines of a C2.

Just like any repair or restoration, your application may need more attention than our example. There are hundreds of replacement parts available for the heater and defroster system and a simple heater core replacement can snowball into a major project. We kept it simple and got our Corvette back on the road with a functioning heater system in a matter of days.

Despite the typical frustrations of removing a heater box assembly, we were pleased to find that the heater core replacement process was pretty straightforward. The toughest part of the process was attaching the outer heater cover to the firewall, as the new foam seals didn’t allow the studs to stick out far enough to get the speed nuts started. With a little help we conquered it and buttoned up the installation. Now our C2 Corvette is ready for comfortable, year-round cruising, no matter the climate. Vette

1. The starting point is an empty outer heater cover, as the blower motor was robbed for another project many years ago. Bypassing the heater core is a pretty common occurrence, but it’s rare to let it go for three decades.

2. The outer heater cover is held in place with speed nuts. It’s a good idea to remove the battery, which opens up enough room for your hands and tools.

3. On your project, you may need to drain the coolant and remove the heater hoses. For this particular car, the heater core was bypassed, meaning that we could simply remove the nuts and slide the fiberglass heater box cover away from the firewall.

4. Moving to the inside, we get started by removing the glovebox. First, we remove the flathead screws that hold the cardboard glovebox in place. Be gentle with the cardboard, as it is brittle from age. This may also be a good time to replace it.

6. With the glovebox out of the way, we can see the task ahead of us. What you can’t see from this angle is one remaining fastener that is holding the heater box assembly in place. It is located above the gas pedal.

7. A gentle tug pulls the studs through the firewall, and you’ll notice that movement of the heater box assembly is limited by the cables that operate the temperature and mode doors.

8. The cables are held in place with these locks, which slide over a pin. Carefully remove the locking clip and then loosen the 5/16-inch bolt that clamps the cable housing.

9. You’ll need some patience to remove the locking clip and cable housing bolt on the defroster. It is tucked in behind the radio so there isn’t a lot of room to operate.

10. After we wrestled the heater box assembly out of the car, we started repairing it with new seals from J&D Corvette. This foam seal is designed to be split lengthwise, and it then slides over the end of the defroster door.

11. The two large seals have an adhesive backing and attach to the main door in the heater assembly. To access the backside of the door, the rivets holding the heater box must be drilled out and replaced.

12. This is the original heater core and bracket after we removed it from the heater assembly. The bracket has some surface rust, but it’s salvageable. We could’ve ordered a new one from Zip, but decided to sand and paint the original.

13. The new heater core came from J&D Corvette. It’s a nice-looking piece and it comes ready to install. Some enthusiasts choose to have their heater core pressure tested before installing, as the inlets can be damaged in transit. It’s cheap insurance to prevent doubling your time investment.

16. It’s time to delicately slide the heater box assembly back into place. Don’t forget to plug in the blower motor resistor, which mounts to the box, near the heater core. If your car has been sitting awhile, or your heater has been dormant for years (like ours), it’s a good idea to replace the resistor.

17. After we installed the heater control cables, we grabbed a helper to guide the studs and heater core inlets into position. From there, we installed the outer foam seal and threaded one nut onto the stud to hold the assembly in place.

18. We had to remove the Y-shaped blower duct when we were installing the heater box assembly, so, once we had the heater box resting in place, we could re-install the duct. The fasteners are hard to reach, but the threads are coarse, so it goes quickly. Do not over-tighten!

19. Now it’s time to button up the inside portion of the heater system rebuild by reassembling the interior. First, we attach the glovebox door, remembering to attach the ground wire to the lower glovebox screw.

20. Finally, we can attach the dash side panels with the original screws and replace any other interior screws that we loosened or removed during the process.

21. Zip Corvette was the source for our additional heater restoration parts, including this ACDelco blower motor. It’s held onto the outer heater cover with short Phillips head screws.

22. The black and orange wire originally went to a capacitor. This was originally intended to suppress “noise” that was transmitted from the motor to the AM radio, but we bypassed it and ran the wire straight to the blower motor. The two black wires are grounds—one from the bulkhead and one to the windshield wiper motor.

23. We sanded and painted the outer heater cover before sliding it into place. You may need a helper to push the inner heater box assembly against the firewall to get the speed nuts started.

24. After installing new heater hoses and a T-fitting from Zip Corvette we are able to add a fresh mixture of water and antifreeze and bring the engine up to temperature. Then, we can give the heater knobs a pull and a twist to test it out!