Step Up and Sit Down! 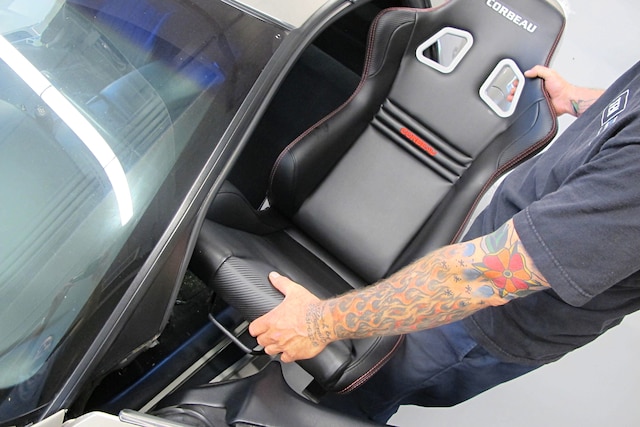 When the C5 Corvette arrived in 1997 it was state of the art from bumper to bumper. It was the most advanced Corvette ever done and it rocked. The C5 sported a fresh high-tech suspension system for better handling. There was the dreamy all-new LS1 GM V-8 sporting 345 horsepower. Underneath, there was a new lightweight hydroformed box frame. True 50/50 weight distribution like the Corvette never had. The trunk is even useable! What’s more, there were fresh creature comforts never before seen in America’s sports car. Seating was very accommodating for its time with full power function. The cockpit was to die for.

With 1997 being long ago enough to have raised a kid who’s now off to college, we’ll bet your C5 Vette has become decidedly worn and ready for improvements. Time to upgrade the suspension, add soundproofing, install a better exhaust system, freshen up the engine and driveline and weave nice improvements into the interior. It’s no secret C5 seats leave much to be desired and have a lot of issues. The factory seats didn’t do a great job of keeping you on center during hard cornering. Over the years, a lot of them started to suffer from mechanical failure in the seatback and in the power mechanism. You can rebuild and reupholster your C5’s original bucket seats or you can spend a whole lot less time and money and opt for a pair of hip-hugging Corbeau bucket seats with all the trimmings.

Corbeau has provided us with a pair of Boss Evo 2 bucket seats, which are made to order for your personal application. The Corbeau Boss Evo 2 off-road reclining bucket seat is the most current version of the very popular Boss Evo reclining bucket seat. Corbeau has redesigned the Boss Evo to cater to vehicles with slightly restricted shoulder room as well as the 4x4 market. This seat is a sweet, stylish all-vinyl alternative to the original cloth Boss Evo. This is a seat born for the Corvette. It ties in with the rest of your C5’s interior without the need for special modifications. Vette

1. Our black vinyl C5 seats are worse for wear after two decades of use, but better than most after all this time. Mechanical issues plague these seats, which is why we’ve chosen to replace them with Corbeau Boss Evo 2 racing buckets for the kind of performance driving we like to do.

2. Our black vinyl C5 seats are worse for wear after two decades of use, but better than most after all this time. Mechanical issues plague these seats, which is why we’ve chosen to replace them with Corbeau Boss Evo 2 racing buckets for the kind of performance driving we like to do.

3. Here’s a look at one of the two rear floorpan studs. You will also need to disconnect the power seat motor assembly.

4. With the seat track unbolted and the power mechanism disconnected removal is easy. These seats tend to be bulky and heavy so be sure to lift with your knees and not your back.

5. Here’s a look at the power drive mechanism, which consists of three motors that operate jackscrews splined to the seat and track. Each of the motors serves a different function ranging from tilt to running the seat fore and aft. This electric seat track cannot be adapted to the Corbeau seats.

6. Behold a chronic problem for C5 Corvette power seats: broken plastic seat connectors. As of press time these are still not available in the aftermarket. However, some Corvette parts businesses such as Corvette Central offer a seat track repair service that can get your seats back to factory fresh.

7. The factory seatbelts can be transferred to the Corbeau buckets or you can go with aftermarket racing belts, which fasten to the Corbeau seats with ease.

8. The Corbeau Boss Evo 2 bucket seat was born for the C5 Vette thanks to its low side bolsters for easy entry and exit, forward tilt feature, three- and four-point belt capability and easy to install Corbeau seat track.

9. A closer inspection reveals just how easy the Boss Evo 2 seatback is for fitment with three- or four-point restraints.

10. The Boss Evo 2 seat bottom was conceived and designed for raw comfort where it counts at your backside. This is especially important for long road trips as well as for canyon carving experiences. These seats keep your posterior right where it belongs. We like the heavy-duty rich black vinyl in a simulated carbon-fiber pattern and the red stitching.

11. The Corbeau seat tracks bolt onto the seat as shown. Bolt holes are located in all four corners.

12. The easy-to-operate Corbeau seat track bolts onto the seat via four Allen set screws. Fore and aft seat adjustments are made by lifting up on the handle in front to modulate seat movement.

13. The original seat belts or aftermarket three- or four-point belts bolt to the seat frame and track.

14. The original seat belts or aftermarket three- or four-point belts bolt to the seat frame and track.

15. A smaller outside diameter flat washer secures the bolt head and allows freedom of seat movement.

16. While you have seats out, now may be the best time to replace worn carpet, which is available from Corvette America. And while you’re at it look into fresh Dynamat sound deadening across the floorpan for a quieter ride.

17. These lightweight Corbeau racing buckets shed unnecessary weight thus making them easy to install. Mount them over the studs and tighten them up.

18. The seat tracks mount over the factory floorpan studs. The factory power seat electrical connections are left disconnected and protected.

19. The Corbeau Boss Evo 2 seats look custom made for the C5 Vette. They are comfortable and offer plenty of support in all directions, yet they don’t get in the way during your entrance and exit.

20. The view from the passenger side yields a factory fresh demeanor with new and certainly comfortable Corbeau buckets. Corbeau seats offer plenty of adjustment room for the longest of legs.

1997 Chevrolet Corvette - For The Rush

This 1997 Chevrolet Corvette Tiger Shark is one Corvette, of many, from GM's Heritage Collection, that hit the auction block at Barret-Jackson. It is powered by a 7.0L, 742hp supercharged LS1 motor and features a Vortech T-Trim supercharger! Details and pictures at Vette Magazine.