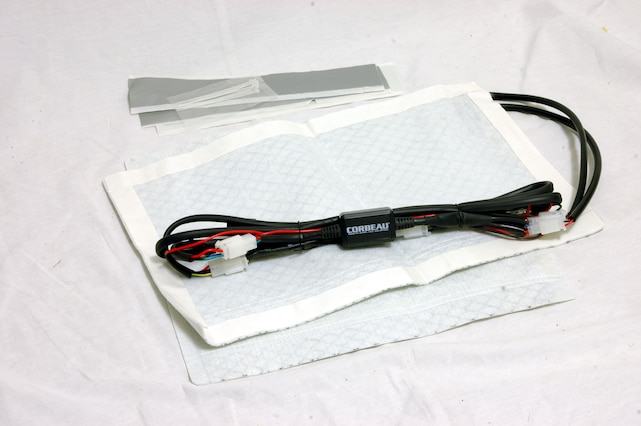 There are many guiding principles to consider when modifying a car. One is comfort; another worth serious consideration is anything that makes your spouse actually want to ride in the car with you. With this in mind, we turn to seat heaters, which can make getting into a cold car much more tolerable and therefore more attractive to your significant other, who may or may not be cold natured.

In our case, we turned to Corbeau for their Seat Heaters retrofit kit, which can be installed in other makers’ seats, as well as their own. Corbeau seats can be ordered with the heaters in place, you can return your seats to the factory for them to do the retrofit, or you can order the kit and do the installation yourself. The kit includes a pair of heating pads, a wiring harness broken into separate sub-assemblies for easy removal and installation and a switch with both high and low settings. The wiring is simple: the harness includes a self-contained relay as well as an inline fuse holder with a 10-amp fuse. Since the pair of Corbeau A4 seats we’re using are for Scarlett, our 1972 coupe project car, we’ll connect the power directly to a fused distribution block we’ve already installed, which will eliminate the need for the inline fuse. For the simplest installation, however, all you really need is switched power and ground. The harness is plenty long to reach anywhere you want to wire it in. However, if you don’t take great personal satisfaction in remaking a wiring harness it’s easy enough to zip-tie the excess length in some unobtrusive place. Another minor change we’ll make is to the switch. While the included black plastic rocker switch (conveniently marked with a seat icon showing its purpose) will look perfectly at home in a newer Corvette, a vintage car like our 1972 looks better with something like a metal toggle. Should you be similarly inclined, just about any Single Pole Double Throw (SPDT) switch should work.

Installing the heaters themselves involves a bit of work, but if you take your time and are careful, it’s not a difficult installation. One basic thing before you start, though: the pads may need to be cut to size. The wires that provide the electrical heat run down either side of the pad, and if you cut these wires, the heater will not work past that point, so do not trim the pad from the sides. You can, however, cut material out of the middle if necessary, such as to make room for an anti-submarine belt to pass through the seat.

Our seat came with that option (called the “fifth slot”) and had a plastic guide in place that passed completely through the seat bottom. Made of two separate pieces (a top and a bottom) joined together and with a flange on each side to hold it in place, we could not separate the two halves without breaking them. We finally resorted to cutting the flange off one side and pulling the guide through. We’ll replace it with new pieces, which are available from Corbeau.

Another important part of seat construction is that the seat cover (micro suede in our case) is held in place by strips of Velcro glued to the seat foam, and which mate with similar pieces stitched inside the seat cover. The heating pad may very well cover these, leaving the seat cover free to move around. When we called Corbeau to ask how to deal with this, they told us to peel the Velcro off the foam, install the heating pad, and then reglue the Velcro strips directly to the pad using 3M Super 77 spray adhesive, which is readily available at big box home improvement stores. Both the seatback and bottom have a broad horizontal strip of Velcro in place, so we did this on both heating pads.

Another factory option that we had foregone when we ordered the seats was the “shaved base,” which takes an inch off the seat foam in the base, letting you sit lower in the seat. Since we had the foam out anyway, we went ahead and shaved it and then were careful to make sure the seat cover was pulled tight around it during reinstallation, to make allowance for the thinner profile of the modified pad.

Once everything was glued in place, we reinstalled the covers, being careful to keep the wiring as hidden as possible and away from anything that could rub on it and cause a short. Both the seatback and bottom pads have a separate plug to connect to the main harness, which makes the installation much easier, and we were careful to make sure the wiring for the seatback had enough length to stay plugged into the harness when it was fully leaned forward.

Bolt the seat back into the car, plug it all in, and you’ve got just the thing for taking those long mountain drives in the fall without having to do it alone.

01. We are installing Corbeau seat heaters in their A4 seats that are going into Scarlett, our 1972 coupe project car. While there are some versions of the A4 seat that have differing foam configurations—depending on the material used to cover the seats—the installation process stays basically the same for all, but will require minor changes in the installation process.

03. We next removed the two bolts holding the reclining mechanism to the seat bottom. Don’t forget the mechanism is powered by a strong spring. If you pull the lever, you’ll find it’s a lot harder to get things back in place when it comes time to line up the seat bottom to the seatback during reassembly.

04. The other side is held in place by a single bolt. It’s under two covers that need to be removed to get access to the bolt.

05. We started on the seat bottom by pulling back the cover, which is held in place with Velcro. Our seats had the fifth slot modification for an anti-submarine belt, which we were unable to get out without breaking. Spare parts are available … which we knew before we broke off the lip of the original one to get it out.

06. The micro suede cover is held tightly in place to the springs by hog rings that pierce through the cover and clamp around the spring. We used a pair of needle nose pliers and a thin screwdriver blade to spread the rings open and remove them.

07. The A4 is available with a shaved base that lets you sit lower in the seat, which we didn’t know about when we ordered ours. Since we’re putting this seat in a car with a rollbar and wanted the extra headroom, while it was apart, we went ahead and shaved an inch off the bottom of the foam using a heated hacksaw blade.

08. We used a Sharpie to locate the rectangular cutout needed for the anti-submarine belt to pass through. The heating pad cuts easily with either a knife or a pair of scissors. Avoid cutting the outside edges on either side of the pad as that’s how the current gets through the pad. If you cut them, the pad will not heat beyond that point.

09. The heating pad is held in place with adhesive strips that are exposed by peeling off the backing paper. To avoid the risk of feeling the wires through the seat cover, we used a razor blade to cut a shallow channel for the wires to fit into the foam and then covered the wires with the included tape to keep them in place.

10. Corbeau recommended 3M’s Super 77 spray adhesive to reattach the strips of Velcro we had to peel off the foam cushion to install the heating pad; we also used it to reattach the cover to the foam when it was time to put it all back together.

11. We sprayed Super 77 on the inside of the seat cover, then gave it time to get tacky before pressing it into place on the foam. Make sure you lay down something to catch the overspray; otherwise you’ll stick to the garage floor every time you walk through.

12. With the cover glued back in place, we reassembled everything in reverse order and squeezed the hog rings closed again, changing the attachment points as needed to make up for the thinner seat foam. We also carefully routed the plug through the seat cover so it can be plugged into the rest of the harness.

13. The seatback cover is held in place with Velcro so there’s no need to worry about hog rings. We opened the bottom of the cover and then carefully peeled it upward to reveal just enough of the seatback to install the pad. It’s a bit like peeling off a wetsuit.

14. We found the heating pad would cover some of the Velcro that keeps the cover in place. After making sure we knew where they needed to be, we peeled the Velcro strips off the foam and then sprayed them with Super 77 so we could reattach them to the pad.

16. Once the seatback and base were back together, we used the included zip ties to attach the control module (basically a relay) to the underside of the seat, where the flap will cover it. All that’s left is to install the switch and connect the harness with switched power and a ground.

17. The included switch has a high and low setting, as well as an LED that lights up when the heaters are on. They’ll look quite at home in a car like this C5, but since these seats go in a 1972, we’ll replace the switches with a chrome toggle switch. Almost any Single Pole Double Throw switch should do.

How to Convert a C3 Corvette to Electric Windows: 1972 Corvette Scarlett Project Car

Wiring in Accessories Into Our 1972 Corvette Project Car