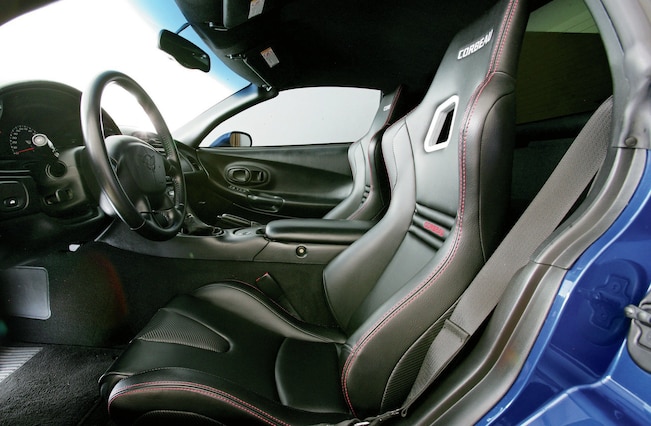 If you’ve ever tried to stay firmly planted in your seat while participating at performance driving events, then you know how much of a challenge this can be. The aggressive stabbing of the throttle and brakes, all while trying to navigate through corners, can easily cause you to slip and slide, and worst of all, you’ll quickly lose valuable momentum.

Over the last several years, our ride of choice has been a C5 Z06, which incidentally, is a great car for spirited driving. We do like the fact that you can lock-in the lower lap belt by pulling it all the way out and letting it retract snuggly across your waist. However, the lack of seat side bolsters still allows you to move around a bit more than we cared for.

Unfortunately for C5 and C6 owners, there just isn’t a lot of room for the reclining mechanism and will have to opt for the Sportline Evolution X version. Admittedly, we were a little apprehensive at first, but after our first 300-mile cruise, we’ll happily say that Corbeau has done a great job of building a performance minded seat that still has a comfortable fixed recline angle for the street.

01. Our tech center manager Jason Scudellari began by removing the front bolts. Note: you’ll need to remove the plastic covers in front of the seat rails. These pop right out with a small screw driver.

02. With the seat moved forward, you can remove the remaining two rear bolts. At this point, Jason raised the seat up slightly to make it easier to disconnect the electrical plugs.

03. While you don’t have to do this step, we went ahead and mounted the seat brackets (PN E1502F driver side and PN E1503F passenger side, $105 each) into place just to make sure we had a perfect fit. We should mention that Corbeau offers two different mounting brackets. The incorrect brackets will have the outer side of the seats mounted a bit too close to the belt retracting mechanism, which will prevent the seat from being able to slide all the way rearward. If this happens, do not force the seat back; double-check your brackets.

04. Another thing we wanted to point out; the seat base height will change to 2.5 inches, which means you’ll sit slightly lower. This will offer a bit more head room if you’re a little taller and provide added clearance when you’re wearing a helmet.

05. With the seats out, we removed the factory latch from the original seat assembly and swapped it over to the new Corbeau brackets.

06. Here’s an overall shot of the seat before being put into place. The Sportline Evolution X (PN 64901F, $399 each) has a vinyl cover, but has the leather feel that even fooled one of our buddies. The lateral support is phenomenal with its thigh, kidney, and shoulder bolsters. As for the material underneath, it’s high-density injection molded foam that ultimately forms to your physique.

07-08. We also wanted to point out the attention to detail. The red stitching was flawless and the carbon-fiber vinyl contrast gives it a great look. The slots in the seats also allow you to run your choice of harness belts. There is no provision for a submarine belt, that’s out for this particular application.

09. To mount the seat brackets, we first removed the bolts from the bottom of the Evolution X seats. From there, move the slider tracks all the way forward, line up the holes, and loosely mount them. You want to tighten the bolts just enough so the slider can be moved backwards, but loose enough that you can still align the rear mounting holes.

10. Once all four bolts are secured, be sure to go over them again for a final tightening.

11. Corbeau also supplied us with a pair of their 3-inch camlock harness belts (PN 53001B, $149 each) that are SFI 16.1 certified. We’re waiting on the harness mount, so we’ll install this portion in the near future.

12. There you have it, a simple seat swap that produced a significant ergonomic improvement. And when you factor in the aggressive suspension setup we have, it truly makes for a much more enjoyable ride both on and off the track. Without a doubt, we have a winner here.