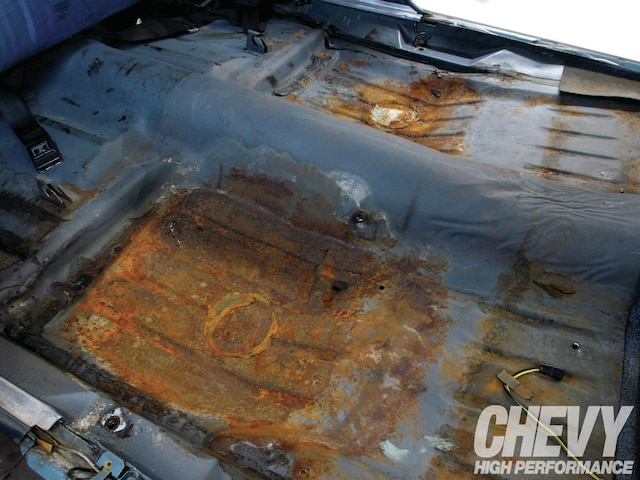 Unlike most of the fully optioned second-generation Novas that came equipped with complete carpeting, our Project Nova didn’t. For years, we’ve been hauling it around to events, shows, and open track days with almost no sound or heat insulation, let alone carpet. All we had been left with was the factory rubber matting, usually found in the less-expensive six-cylinder bodies.

Most of our upgrades were left for an all-business approach. For the time being, our factory interior—or lack thereof—would suffice. Initially, we were more into getting the Nova up and running to compete. However, we’ve reconsidered, and were after a more comfortable ride for long cruises to and from the tracks. With the summer months approaching and Southern California weather clipping into the triple digits, it was time for some interior refinement.

To eliminate much of the engine and road noise we were experiencing, we needed a proper base. Well aware of Dynamat’s products, we searched its detailed website and found a Custom Cut floor kit for our ’72 Nova. These kits greatly reduce buzzes, rattles, and vibrations with precut sheets right from the box! All you need to do is peel and stick each Dynamat sheet to the interior body panels—no cutting or guesswork, and just the right amount of Dynamat for the job. To complete the makeover, we also went with a two-piece, molded carpet kit from Classic Industries and new Fisher doorsill plates.

Though install time will vary, we had the new Dynamat floor kit and molded carpet installed in just over a full day. And when the job was done, it felt like we were entering a high-end coach build and even enjoyed some better sound from our mild stereo. Believe us, the interior will be quieter and cooler, and your passengers will thank you for all the hard work—it’s worth the effort!

What’s it like? While cruising the streets and hauling on the freeway, we’ve eliminated most of the exhaust drone from the cabin. That means an even quieter ride than what we’re experiencing now. Not only are conversations at a manageable level, but the heat that normally radiates from the pavement has also been reduced. It stays cooler and quieter, and it’s like sitting in the living room at home—it’s that good. CHP