Newsletter
Sign Up today for our FREE Newsletter and get the latest articles and news delivered right to your inbox.
Home
Super Chevy
How To
Exhaust

Installing a new exhaust system under your classic Chevy 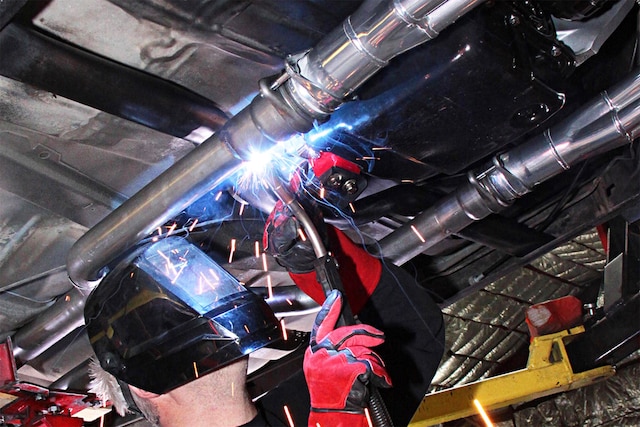 There's a lot to be said for the deep throaty sound of cool Flowmaster mufflers barking out a tempo from a hot Chevrolet mill. At idle, there's the patented sound of Flowmaster mufflers in all their shapes and sizes for nearly every application imaginable. The best way to describe the Flowmaster sound is that sweet burble from the tailpipes as you slowly cruise through a car show or popular cruising spot. It is a sound that makes people look whether they're a car enthusiast or not. And when it's time to get it on, Flowmasters belt out the attitude they're widely known for. They emit a badass sound known around the world.

We're at Hot Rod Specialties out in the Los Angeles suburb of Upland along the foothills of the San Gabriel Mountains. Joel Rode is about to radically change the attitude of a customer's '66 Chevelle 300 post sedan with the installation of a complete Flowmaster American Thunder exhaust system, which is all Flowmaster from the headers to the tailpipes. Joel has opted for the Super 40 mufflers with 2 1/2-pipes throughout. It is always debatable how much power can be gained from the installation of a high-performance exhaust system. One thing is certain. You will gain horsepower and some degree of torque. The end result boils down to muffler restriction issues, header primary and secondary tube sizing, and exhaust pipe sizing.

Flowmaster tells us if you're looking for a complete header-back dual exhaust system with an aggressive throaty tone, this system is a good choice for the money. You can visit a local exhaust shop and have your system custom fabricated and welded up or you can purchase a complete Flowmaster American Thunder system ready to install for a lot less cash. As a bonus, you get mandrel formed pipes, which isn't happening at most muffler shops. What's more, they include specially selected Flowmaster mufflers designed specifically for your application. We're going to show you how to install the American Thunder exhaust system in your home garage with little more than basic hand tools, a low-profile transmission jack or floor jack, a Sawzall, and a MIG welder.

Here's the passenger side of our Chevelle's engine bay. It looks like a slam-dunk fit. However, we're running a 700-R4 transmission behind a small-block Chevy, which can present some clearance issues.

On the driver side, expect to install the headers from underneath once you've "adjusted" the 700-R4 transmission. Original Turbo 350, Powerglide, and Muncie four-speed applications shouldn't require any alterations.

Joel Rode, owner of Hot Rod Specialties, begins the Flowmaster installation with the removal of the dipstick tube, which will be reinstalled once the headers are in place.

Because the 700-R4 transmission has these dog ears sticking out from both sides of the bellhousing they will have to be trimmed, as shown. We used a power hacksaw from Harbor Freight.

The passenger side header is an easy fit from the top. The only issue we had was the dog ear on the side of the 700-R4's bellhousing, which, as we mentioned, had to be trimmed. The header flange features a D-port that will match up with the GM Fast Burn heads on our Chevrolet Performance SP383 small-block crate engine.

You need to be choosy about header bolts, which should employ some sort of bolt head lock to keep the bolts secure. Install the end bolts first, drop in the header gasket, and run all of the bolts down from the inside out. Flowmaster provided the header bolts in the kit.

On the driver side, Joel learned he needed to feed the header up through the bottom, which can be tricky if you're doing it on a garage floor. One suggestion is to jack the engine on the left hand side to get clearance for installation from above.

These are some of the nicest long-tube headers we've ever installed. Gone are those troublesome old-fashioned collectors we used to fumble with that blew gaskets and were a pain in the neck to disconnect. These guys disconnect quickly and, because they're a ball-and-socket fit, they seal nicely. No gaskets or rings to mess with.

Joel sets up the Flowmaster H-pipe on a transmission jack for support while he measures and cuts everything to fit. Doing the exhaust is dance of measure, trim, test-fit, and repeat until everything is just right.

Flowmaster provides plenty of additional plumbing for a variety of applications, which gives you more pipe and enables Flowmaster to give you the price advantage over an exhaust shop.

Joel performs a test-fit between the H-pipe and the pipes that tie in with the header collectors. It looks like there's a lot of pipe to be eliminated, which sure beats not having enough.

Here's the header ball-and-socket flange collector tube, adapter, and the initial pipe right off the header ready to be clamped or welded up.

Joel's doing a good mock-up job on the American Thunder exhaust system. He has measured and trimmed the H-pipe to tie into the headers. He will have to perform a certain amount of tweaking to ensure the pipes don't touch the floorpan and chassis.

The system's H-pipe comes fully assembled and welded, which is nice since it saves time and eliminates leaks.

That first initial muffler fit is a tight one to say the least. Joel's going to trim back the H-pipe and move it forward to gain clearance for the mufflers.

The section with the H-pipe has been trimmed and moved forward. Joel is welding up the H-pipe section where it joins the exhaust pipe extensions off the headers. Although you can avoid welding by using the provided Flowmaster clamps, welding each joint makes for quieter operation. Clamped joints are great for when you need to drop the system, but you want as few of them as possible.

Joel tried something else we think is pretty cool. He has opted for quick-disconnect couplings at the mufflers, which can be performed on the inlet or outlet side depending upon your application and mission. This will make working on the car, where the exhaust needs to come off, much easier.

You will find the Flowmaster system gives you the flexibility of excessive pipe, which means you can cut it down to size for fitment. Just don't cut off too much.

Joel welds on his quick-disconnect exhaust couplings, which can also come in handy at the dragstrip when you want to make a pass without exhaust restriction. Although we've found through the years you can actually make more power to the wheels with the mufflers installed.

Flowmaster gives you the option of "bologna" tips or turned down tips at the tailpipe. We've chosen the straight slash-cut (also called bologna tips if you roll old school), but it's cool that they give you options. It's nice that the system can be tailored to a specific car, yet have quite a bit of installation flexibility.

Joel performs final welding at the mufflers and tailpipes. You want a good, clean weld to where there are no leaks. Leaks will make your ride sound terrible and are just annoying.

The beauty of the American Thunder system is a nice, clean profile just underneath the rear bumper, or it can be completely hidden if that's how you want to roll. Either way you will get that killer Flowmaster sound.