Factory-Aftermarket Upgrades on a 2018 Camaro SS: Intake and Exhaust 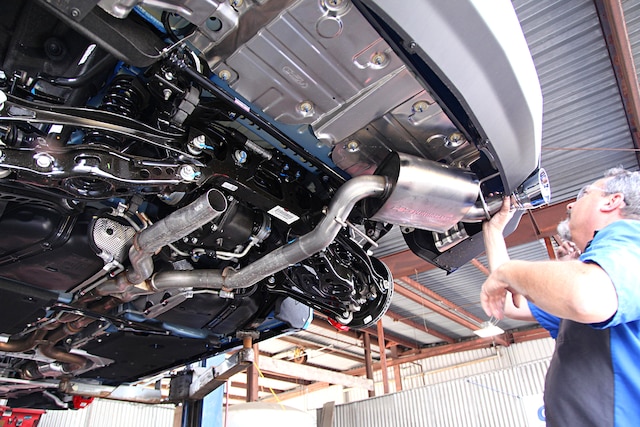 So you’re thinking of installing an aftermarket cold-air intake and axle-back exhaust on your new Camaro, huh? Well, you came to the right place ’cause that’s exactly what we’re doing with this 2018 Camaro 1SS. But we’re taking it one step further by getting our “aftermarket” parts from Chevrolet Performance. Air quotes around aftermarket because, while they aren’t factory parts, they still work with your factory warranty if your local Chevrolet dealer installs them. So you get all the power and sound you want with none of that, “these parts void your warranty, sir,” hassle when you take your Chevy in to get serviced.

For the install, we headed over to Guaranty Chevrolet in Santa Ana, California, and followed along as technician Richard Grable installed the new Chevrolet Performance parts. He started with the exhaust before moving on to the intake and finished it all off by re-flashing the stock ECU to accommodate the higher-flowing intake.

Driving the car before and after, we seriously dug the new exhaust note. The car sounded all right with the factory muffler, but man, did the new setup let that LT1 sing. As far as performance goes, we honestly weren’t expecting a massive power increase, but we were at least hoping for a few numbers at the top of the power curve. To find out, we brought the car out to GTR High Performance in Rancho Cucamonga, California, and had them run it on their Dynojet chassis dyno. After a couple of warm-up pulls, the SS put down 414 hp and 409 lb-ft of torque. Back in 2016, when the new LT1-powered Camaro SS came out, our friends over at Hot Rod magazine dyno’d a stocker on a Dynojet and it made 405 hp and 405 lb-ft of torque so an increase of almost 10 peak horsepower sure is nothing to sneeze at.

Whether you’ve already got a new Camaro SS or you’re planning on putting in an order, you can’t go wrong with the addition of these “aftermarket” upgrades from Chevrolet Performance. So, follow along as we tag along with Richard from Guaranty Chevrolet for the process of installing the new exhaust and cold-air intake on this brand-new 2018 Camaro SS. CHP

1. Beginning with the exhaust, Richard first measures from the exhaust tips to the beginning of the new pipes to prepare for cutting.

2. He then uses a reciprocating saw to make a clean cut on both pipes and removes the old muffler.

4. Next up, Richard removes the rear-most exhaust hanger on either side and installs it onto the new muffler.

5. The exhaust is lifted into place and Richard checks to make sure everything lines up as it should (remember, kids, measure twice and cut once), and it looks like all is well.

6. He slides the new exhaust onto the stock hangers, which took a little bit of muscle and lube to get the job done.

7. No welding here. The Chevrolet Performance exhaust simply slides over the stock pipes and is held on by a heavy-duty clamp on each pipe.

8. And just like that, the new exhaust is installed and we were ready to hear that LT1 rumble.

9. On to part two of this install: the Chevrolet Performance cold-air intake kit. Like the exhaust, it is a direct replacement for the stock parts, but unlike the exhaust, no cutting is required.

10. Step one, Richard detaches the Mechanical Sound Enhancer (MSE) tube and the PCV reservoir from the stock intake pipe and then removes the whole assembly from the throttle body.

11. Next, the mass airflow (MAF) sensor is removed from the factory airbox before the airbox itself is removed.

12. While the intake piping is out of the way, Richard removes the throttle body to add in a new gasket and spacer.

13. The spacer helps offset the intake piping for proper fitment within the engine bay.

14. He then installs the new cone filter housing, which acts as a heat shield and lowers intake temps.

15. Next, the high-flow cone filter goes into the box and the MAF sensor is installed in the new pipe on the engine bay side of the box.

16. A nearby HVAC tube is wrapped in abrasive-resistant material and held in place with cable ties to protect it from wearing on the intake tubing.

17. Richard then installs the PCV reservoir on the 90-degree bent intake pipe while it’s still outside the engine bay.

18. The pipe then goes into place and is reattached using hose clamps.

19. Because it can be hard to hear that lovely intake noise from inside the highly insulated cabin of the Camaro, the MSE tube is reattached to the new intake.

20. Finally, the cone filter is sealed off completely from unwanted engine heat when Richard installs the stylish see-through lid on the housing.

21. The final product is an even cleaner-looking engine bay and an air intake that sucks nice cool air through a high-flow cone filter.

22. After getting that ECU flash we mentioned, we strapped the SS on GTR High Performance’s dyno where it made a healthy 9 horsepower and 4 lb-ft of torque over stock. Add that to the great sounds coming from the engine bay and exhaust and you’ve got one killer, warrantee-retaining 2018 Camaro SS.