Developing Headers for an LT4-Powered 1969 Camaro 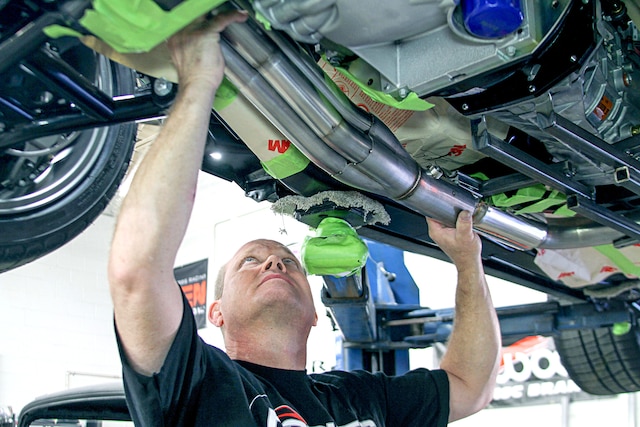 It has been a while since we’ve visited the construction of Mark Stielow’s latest Camaro project. We’ve covered the build over the past year and you undoubtedly saw images of its debut at the 2017 SEMA Show in Holley’s booth, and on the cover of Chevy High Performance’s April 2018 issue.

Holley was a big contributor to the car, from the supercharged LT4 crate engine’s mounts to its exhaust system. In fact, it’s the exhaust system we’re addressing with this installment. Holley’s Hooker Headers division used the first-gen Camaro to develop LT swap headers and we were there to document the process, following how a collection of 304 stainless steel tubing was carefully cut, shaped, and welded by the company’s exhaust engineer, Doug Marino, to create a custom set of headers that ultimately served as the models for Hooker’s production headers.

Hooker prototyped mid-length and long-tube headers for the car, designed specifically for its Detroit Speed front subframe. The company has also designed LT swap headers for first-gen Camaros retaining the factory-original subframe. Additionally, Marino fabricated the rest of the car’s exhaust system while on location at Detroit-area Sled Alley, where the rest of the car’s fabrication was handled.

“The LT engine swap is getting more popular every day and it was important to develop headers for not only the stock chassis but the Detroit Speed subframe that so many builders are using for track-capable Pro Touring machines such as Mark’s Camaro,” says Marino. “In fact, evaluating the intended use for the vehicle, from basic street performance to dual-purpose street and racing, is the first step in our development process for every new header system.”

While we all know the purpose and function of exhaust headers, it’s worth revisiting the importance of their design for optimal engine performance. Exhaust flow increases with higher rpm and higher horsepower levels, increasing the importance of quickly and efficiently drawing exhaust gases out of the cylinders. And because combustion byproducts don’t burn a second time, any residual exhaust gases left in the cylinder during the next combustion cycle reduces cylinder filling and can contaminate the incoming air/fuel charge. The bottom line is it reduces performance and efficiency.

In the old days, it was a given that swapping the factory’s heavy, restrictive, cast-iron exhaust manifolds for a pair of high-flow headers was a sure way to uncork a few horsepower—and more when additional engine modifications were made. These days, the OEMs have gotten much better at designing high-flow, low-restriction exhaust manifolds.

Even with a high-flow factory exhaust manifold, there are compromises, mostly to accommodate underhood packaging and noise level targets. In a Pro Touring project such as Stielow’s Camaro, all those factory compromises go right out the window, allowing the exhaust system to be optimized for ultimate performance. That generally boils down to two factors: the diameter and length of the primary tubes.

Generally, a longer primary tube will promote increased torque lower in the rpm range by maintaining exhaust velocity and promoting low-speed scavenging. The shorter, larger primaries will enhance high-rpm scavenging. Mid-range and top-end power will benefit from greater volumetric efficiency and better inertial scavenging at higher engine speeds, when the exhaust volume is increasing rapidly. That will shift the torque curve higher in the rpm range and low-speed torque will suffer due to poor inertial scavenging at low engine speeds. Mid-length headers are a packaging solution, particularly for vehicles employing a dry-sump oiling system, which require more room for the oil lines. Compared to naturally aspirated combinations, supercharged engines do not seem to suffer as much from the lack of primary length, which makes for a good trade-off.

Scavenging—the practice of using the negative pressure generated near the exhaust valve to draw exhaust gas away from the cylinder—is instrumental in an efficient header’s design and has everything to do with primary tube length and size.

“Ideally, equal-length headers, where each primary tube is the same length, offer the best scavenging,” says Marino. “When the tubes are the ‘correct’ and equal length, or very close to, the timing of the exhaust pulses between the tubes is optimized to create greater, more efficient spillover signal at the collector. Wave tuning is more accurate and the engine becomes more balanced.”

The economics of marketing affordable headers, however, typically means compromise. In other words, most headers out there aren’t equal length, including the LT swap headers developed on Stielow’s car.

“The realities of developing and manufacturing truly equal-length headers makes it a pricey proposition,” says Marino. “Our experience and testing has shown that when the tubes are very close to being equal in length, as they are with these new LT swap headers, the performance difference between them and true equal-length headers isn’t significant for most applications.”

To put it another way, the performance delta between them ain’t nothing compared to the cost delta, so almost-equal length offers the best cost/performance balance.

Marino spent the better part of a week at Sled Alley crafting the headers and exhaust system on Stielow’s Camaro. After the prototype headers were completed, he returned with them to Holley’s headquarters in Bowling Green, Kentucky, where they were laser-scanned in preparation for manufacturing. They’ll be on the market when you read this.

The rest of the custom exhaust system’s construction is detailed in the accompanying photos—and we’ll spare you the pun of calling it an exhaustive look at header construction. You’re welcome. CHP

Rather than starting at the exhaust ports on the cylinder heads, the headers’ design actually begins at the end point: the collectors. Hooker Headers works from the rear of the vehicle forward to ensure the rest of the exhaust system fits as it should, while giving a target point to aim the primary tubes.

Building the headers on the car starts with bolting on the same 3/8-inch, water jet-cut, stainless steel flange that will be used on the production headers.

Hooker Headers’ Doug Marino holds up a curved length of 1 7/8-inch-diameter 304 stainless steel tubing to the exhaust port outlet on the flange for cylinder No. 2 as he begins to gauge the general routing requirements for the LT engine in the Detroit Speed subframe.

Another length of tubing is cut to add length to the first primary tube. It is angled slightly to ensure clearance within the chassis.

The additional length is tack-welded to the first length of tubing. At this point, it’s only necessary to hold the two pieces together to check the overall fit in the chassis, so no finish-welding here.

The first tack-welded primary tube is shown here mocked up on the engine and routed to the collector. Note how an additional length was added to the tube for cylinder No. 2 at the flange, pushing the primary tube out far enough to provide sufficient clearance around the spark plug wire.

The LT swap headers feature a conventional four-into-one collector with a 3-inch outlet. Some mistakenly call this a merge collector, but a merge collector necks down after the tubes come together and widens at the rear to create a venturi effect.

The steering linkage and starter are the two biggest obstacles when it comes to header design. In some cases there’s no choice but to run the steering gear through the tubes. When it comes to the starter, the challenge is not simply keeping a primary tube away from it, but doing so with enough clearance to prevent a heat soak problem—while also enabling the starter to be serviced (removed).

When the header’s design is mostly determined, a position for the oxygen sensor bung must also be accommodated.

Here, Marino confirms the final fitment and positioning of the headers. Mid-length and full-length headers were prototyped on the car, and this is one of the full-length headers, which will maximize horsepower output at higher rpm.

Here’s a look at the finished prototype headers, which served as the models for Hooker Headers’ new LT swap headers. Along with versions designed to fit the Detroit Speed subframe, they’re also available for the stock first-gen Camaro subframe.

For Stielow’s car, some careful finish-welding and finish-work with some steel wool on the tubes produces a gorgeous, premium brushed appearance.

Back at Hooker Headers’ production facility, the digitally scanned dimensions of the prototype headers are fed into a computer-controlled tubing bender, which produces perfectly accurate primary tubes by the score.

Fixtures hold the flange, primary tubes, and collector in place so they can be welded by Hooker’s craftsmen.

Finally, racks of new headers are prepped for shipping.

The flow tubes for the X-pipe wrap tightly around the contours of the new Hooker transmission crossmember designed to accommodate the T-56/T-56 Magnum transmission with the Detroit Speed subframe.

A pair of Hooker’s VR304 stainless steel mufflers complements the headers. They feature a straight-through flow design for minimal restriction. In fact, they can be mounted in either direction, which makes custom fitment easier. They each measure 14 inches long by 9 inches wide and 4 inches tall.

Here’s a look at the exhaust system flowing to the rear of the car. Ideally, it would have been great if the driveshaft wasn’t trapped by the exhaust system, but it was the only way to keep the system tucked up in the chassis to maintain adequate ground clearance.

The exhaust outlets are routed over the axle and as far away as possible from the fuel system’s components.

Like the headers, the exhaust outlets are made of 304 stainless steel and after the tips were trimmed flush with the bottom of the body, a little more treatment with steel wool produced the finished, brushed appearance. From stem to stern, the exhaust system is complete.

The harder you drive your Chevy the higher the reward, but the risks go up as well

Dave Wallace drives his insane 1969 Camaro hard, but going fast has risks and a crash at 140 mph roughed him, but he’ll be back, faster than ever!