Newsletter
Sign Up today for our FREE Newsletter and get the latest articles and news delivered right to your inbox.
Home
Super Chevy
How To
Exhaust

Sound Barriers: Get Your Chevy SS Sounding Right, And Flowing Free, With An After-Back System From JBA 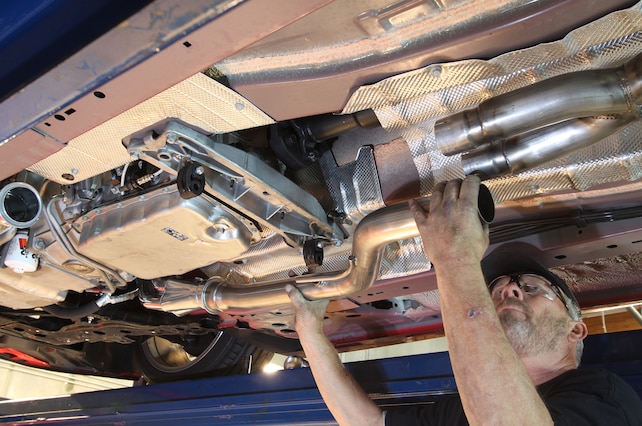 There’s an old adage about a dog whose bark is worse than his bite, but what if it were the other way around? Such is the case with the new Chevy SS. Even with an eight-cylinder LS3 under the hood, the sound out the tailpipes was barely louder than your average commuter car. Mustangs, which make far less power, sound like Pro Stockers by comparison.

Even when we mashed the throttle the sweet LS3 music trying to emanate from the stock mufflers was stifled and over restrained. We didn’t want quiet, we wanted the damn car to sound like a muscle car. The solution was to call up the folks over at JBA and see what they had cooking. At that time they were just getting ready to introduce a selection of exhaust goodies to help make the new Chevy SS sound the way God intended V-8–powered American cars to sound.

Of course, we didn’t necessarily want our ears to bleed, or be slowly driven insane by drone, so we were happy to find out that JBA had various levels of exhaust systems from mild to wild. They constructed the systems so they would be easy to install and not tick off California’s smog police and they offer kits for those that are hitting the track and want maximum performance. To check out all of their offerings we headed over to their R&D department where they had a shiny new SS up on the rack.

01. There are two directions you can go when upgrading your exhaust system. For street cars that need to stay emissions compliant, JBA offers sweet 1.75-inch Cat4ward headers (PN 1813SJS). For those that roll on the wild side they make a set of competition 1.75-inch long-tubes (PN 6815SJS) that will net the biggest power gain. Either style can be ordered raw or, for a few extra bucks, coated in silver ceramic.

02. Under the SS is the standard GM arrangement of four catalytic converters with an H-pipe in the mid-section. The system is clamped together rather than welded, which makes swapping a snap.

03. Don’t try removing or installing headers/manifolds from the top, doing so will only result in tears. However, from underneath the car it’s a pretty easy undertaking. First, JBA’s R&D Technician Scott Reed removed the plug wires and dropped the stock iron manifolds. He was then able to slide the new shorties in place.

04. The stock, emissions compliant system, with cats, could then be bolted back in place. Aside from looking better and weighing less than the iron GM exhaust manifolds, the new shorties free up a few horsepower.

05. This shot illustrates how impossible it would be to remove and/or install headers/exhaust manifolds from the top of the car.

06. Here’s the new after-cat system from JBA. Made from high-quality, mandrel-bent stainless, this kit (PN 40-3118) is designed to mate up to the factory 2.5-inch cat assembly. For those on a budget, or just want to retain more of the factory system, JBA also offers an axle-back system (PN 40-3117).

07. The massive stock muffler makes the new stainless JBA muffler look almost tiny. In addition to knocking a few pounds off the SS, the new exhaust system should help give the Chevy a more aggressive muscle car sound.

08. Scott unbolted the system and removed the stock mid-section. No welding or cutting meant it would be easy to go back to stock if we ever wanted.

09. Here you can see the GM mid-section next to the new JBA parts. Noticeable differences include the deleted resonator chamber, the use of an X-pipe (as opposed to the factory H-pipe), and the fact that JBA has three pieces rather than the one huge factory deal.

10. The JBA mid-section simply bolted to the factory cats using the supplied clamps.

11. The rear connectors are the same “ball” type GM utilizes. This design is nice since it made adjusting the system super easy. Once everything was lined up perfectly the clamps were tightened up.

12. The resonator on the GM system isn’t part of the emissions package, so removing it won’t run you afoul of the law. It’s there to remove certain harmonics that can lead to drone on the highway. It also quiets down the stock system quite a bit.

13. With the new system, it is possible to have drone at certain rpm/mph points. To combat this, JBA includes what they call Drone Killers in the after-cat kit. These cones fit inside the inner tailpipe (one on each side of the car) and can easily be removed for track day and then popped back in for cruising.

14. The polished, 3-inch stainless tips fill the bumper cutouts much better than the stock single tips. It’s almost like GM planed for dual tips when they designed the bumper.

15. The competition-only long-tubes install just like the shorties, from the bottom.

16. The fitment was great and they easily cleared the frame and the driver-side oil cooler.

18. The long-tube headers utilize stainless band clamps, which we really prefer over traditional gaskets and bolts.

19. The new JBA system used the factory rubber hangers and we didn’t need to use extensions for the O2 sensors.

20. Here’s a shot of the competition system fully installed and ready to rock. Simple, clean, lightweight, and high flowing; who could ask for more?

Hennessey is at it again! Recently HOT ROD showed you several of their bonzai runs down the Houston Grand Parkway, most recently in a 2014 Chevy SS. Now they have taken the same car down the quarter mile with 11-second ETs.

2014 Chevrolet SS Sedan - Video Review. We take a tour inside and outside the all-new RWD 4-door Chevy.

It’s been 18 years since Chevy offered a five- (or six-) passenger, rear-wheel-drive sedan and it’s been 44 since it offered one with serious muscle under the hood. Well, that drought has come to an end, thanks to the 2014 Chevrolet SS, an American muscle car with an Australian accent.

Chevrolet Performance Hosts Invitation Only Media Party at SEMA 2013. We take a sneak peek at the upcoming COPO Camaro, Z28, and SS sedan.

Check out the September 2013 edition of The Buzz where we discuss the pricing of the 2014 Chevrolet SS, horsepower of the 2014 Corvette Stringray, and the midsize luxury design of the 2014 Cadillac CTS.

Chevrolet announced today that the suggested retail price for the 2014 Chevrolet SS sports sedan is $44,470.