X-pipes and H-pipes Add Easy Horsepower, but Which is Best for Your Ride? 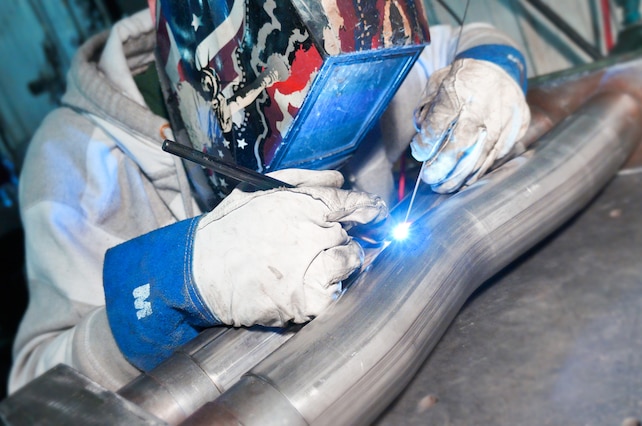 Don't let the glorious Bow Tie horsepower fool you. Firing eight cylinders every 90 degrees in a 1-8-4-3-6-5-7-2 sequence is an inherently chaotic endeavor. Since the mass of the counterweights and flywheel mask this violence by smoothing out the power delivery of the crankshaft, it's easy to forget that eight individual combustion events are going down every 720 degrees of crank rotation. Alternating the firing order between the left and right bank of cylinders means that there is often a substantial difference in exhaust pressure between each bank. The result—at any given moment—is a traffic jam of exhaust molecules in one bank of cylinders when minimal backpressure exists in the opposite bank. While this recurring scenario reduces engine efficiency and horsepower, the solution is as easy as integrating a balance pipe into the exhaust system.

Adding a balance pipe is like downloading Google Maps for your exhaust. As combustion gases travel out of the header collector and into the intermediate pipe, if their progress slows down due to backpressure, a balance pipe redirects them to a less congested flow path. "The name 'balance pipe' should be a clue as to why X- and H-pipes work so well," Don Lindfors, Director of Exhaust R&D at PerTronix Performance Products explains. "Just like the name suggests, they help to balance the flow between all the cylinders. Beyond that, they can even help with scavenging by having cylinders from the opposite bank of the engine create a negative wave to increase the overall flow of the exhaust."

In terms of both performance and price, balance pipes are so effective that GM has been installing them for decades on Corvettes and more recently on fifth-gen Camaros. Best of all, balance pipes can be added to any existing dual exhaust system. Before busting out the Sawzall and welder, however, there are many important factors to consider, such as the performance difference between X- and H-pipes, where to place them in the exhaust tract, cost, and potential horsepower and torque gains. Granted that balance pipes are rather simple devices, but there's far more to the science behind how they work than their appearance suggests. To get the inside scoop, we hit up the industry experts Blane Burnett of Hooker Headers, Don Lindfors of PerTronix, and George Rumore of Stainless Works.

Balancing the exhaust pressure from bank to bank is just one of the many ways an X- or H-pipe improves overall exhaust flow. With a conservative factory camshaft, the exhaust seemingly flows out the tailpipe in one continuous stream. In reality, however, exhaust waves travel in pulses, which become much more noticeable as camshaft duration increases. Consequently, reducing the detrimental effects of these pulses can positively impact horsepower and torque. "A balance pipe serves two distinct functions. First off, it takes the left and right banks of an engine's exhaust and provides a crossover point to equalize flow from side to side," Blane Burnett of Hooker Headers explains. "Secondly, balance pipes smooth out uneven exhaust pulses. Any given engine generates low- and high-pressure exhaust pulses due to the effects of the firing order. As these low and high pulses move downstream through the exhaust piping, they travel at different speeds. Having an exhaust crossover helps draw these pulses out into a more balanced pattern, which ultimately improves engine output. A nice side benefit is that crossovers also decrease in-cabin exhaust drone."

Although X- and H-pipes perform extremely well for a minimal investment in time and money, both offer unique properties that make one more suitable than the other depending on the application. "The two biggest differences between an X- and an H-pipe are sound and power. Generally, the X-pipe will deliver a more high-pitched exhaust note, making a car sound more exotic, whereas an H-pipe gives a deeper tone with more of a traditional hot rod sound," says George Rumore of Stainless Works. "As for the difference in power gain between the two, it is very minimal. The X-pipe will usually make anywhere from two to four more horsepower than an H-pipe. The slight horsepower difference comes from the way the X-pipe creates a venturi effect, which helps pull the exhaust gases out of the cylinder faster. Overall, the main difference is sound rather than performance, meaning there are no pros or cons. It's simply a matter of personal preference."

In addition to differences in sound and horsepower, both X- and H-pipes affect different parts of the powerband as well. According to PerTronix's Don Lindfors, the basic configuration of both styles of crossovers lend a clue as to why this is the case. "An H-pipe tends to make more of a difference at lower rpm, while-X pipes will increase power more at higher rpm. As you can imagine, just by looking at each configuration, in the H-pipe the exhaust has to make a sharp 90-degree turn, while the X-pipe offers a smoother transition," he says. "The X-pipe creates much more of a scavenging effect. That said, it is important to prevent the X-pipe from necking down too small or flow can be hampered. Both an X- and an H-pipe will smooth out the separated sound of the cylinders, while an X-pipe tends to blend all eight cylinders together more."

For all-out power, X-pipes seem to be the winner, but H-pipes boast several advantages as well. "H-pipes typically offer increased backpressure compared to an X-pipe, which nets an increase in low-end torque. They are also more tunable because they offer more options in terms of the length of the crossover, the diameter of the tube, and the size and location of the transfer hole," Blane Burnett explains. "As a simpler design that takes up less space, H-pipes have more options as to where on the exhaust system the crossover section can be placed. While performance is a large consideration when designing an exhaust system, vehicle packaging is also a huge factor. Depending on the application, an X- or an H-pipe might suit the chassis better, but an H-pipe certainly offers more options as to where it can be placed."

01. Gen III/IV small-blocks, like this 840hp LS7 built by the School of Automotive Machinists, utilize a slightly different firing order (1-8-7-2-6-5-4-3) than past Chevy V-8s. Unlike a Mouse or Rat engine where adjacent cylinders on the same bank fire one right after the other, the revised firing order ensures that each combustion event alternates between each bank of cylinders. In theory, this should help even out the variation in exhaust pressure from bank to bank.

02. X-pipes are essentially two mandrel bends sliced open along the long radius to create an oval opening, which are then welded together. The openings create a seamless path for exhaust to travel from one bank to the other.

03. In contrast to an X-pipe, exhaust must negotiate a series of 90-degree turns in order to move from one side of the exhaust system to the other in an H-pipe. The resulting increase in backpressure isn't necessarily a bad thing, since it boosts low-end torque. Stainless Works laser cuts its X- and H-pipes to ensure optimal flow without any obstructions at the center union.

04. A-bodies were never designed to accommodate an X-pipe, but the transmission tunnel serves as an ideal location due to its proximity to the header collectors. This location also provides plenty of ground clearance.

06. The radius of the two halves of pipes that comprise the "X" typically range from 45 to 90 degrees. The wider the radius of the bends, the tighter the space they can fit inside. Even beneath the tight confines of a C5 Corvette, wide-radius bends make it possible to fit an aftermarket X-pipe with room to spare.