Newsletter
Sign Up today for our FREE Newsletter and get the latest articles and news delivered right to your inbox.
Home
Vette
How To
Exhaust 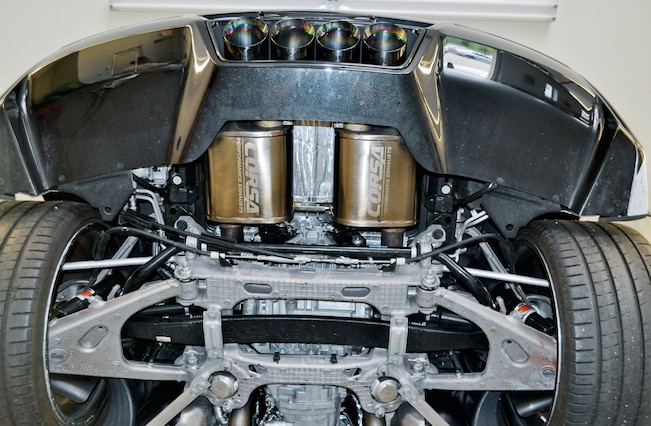 Let's be honest: The aesthetics of the Corvette experience is just as important as the performance it delivers—from the right wheels and underhood accessories to the bark of its historic small-block engine. In fact, the aural signature of Chevy's supercar is as important as the chrome accessories on a Harley, the wood finish on a Chris Craft, or the feel of a Callaway Big Bertha.

Considering they were designing an exhaust system for the Goldilocks of customers—not too quiet, but not too loud—the C7 Stingray comes from Bowling Green with a pleasing sound quality. Its bark increases noticeably with the optional NPP-code exhaust (standard with the Z51 package), which not only raises the decibel level, but takes the LT1 engine's output from 455 horsepower to an even 460. It also enlarges the exhaust outlet diameters from 3 inches to 4 inches.

Despite the factory's admirable effort, some owners are statistically going to be up in the 80th and 90th percentiles of those who want a more aggressive sound emanating from their Vette's pipes. That's where the aftermarket comes in—specifically, Ohio-based Corsa Performance, who began working on the C7's signature sound since the first production model saw the light of day last year.

But it's not as easy as you think. Anyone can craft a louder exhaust, but the nuance of enhancing sound without an annoying highway drone takes considerably more research and development. The C7's Active Fuel Management (cylinder deactivation) adds another wrinkle, because when the cylinders shut down on the highway, the LT1 effectively becomes a four-cylinder engine, completely altering the exhaust signature.

"The seventh-generation Corvette is a technical marvel—and an engineering challenge when it comes to the exhaust system," said Craig R. Kohrs, TMG Performance Products vice president and general manager. "Corsa engineers spent more than seven months and well over 1,000 hours testing a wide range of possible exhaust solutions to deliver the ultimate Corvette exhaust system. The resulting Corsa exhaust system integrates perfectly with the advanced technologies already available on the vehicle and works in conjunction with the C7 stock upstream valves, creating a free-flowing, high-performance exhaust system with an aggressive exhaust note and no drone, regardless of driving mode or speed."

Corsa's C7 system is based on their patented "reflective sound cancellation" technology that was introduced for the C5 Corvette. Chambers in the muffler turn drone-enabling low-frequency sound waves around 180 degrees. By reversing, or reflecting, the sound waves back on one another, they essentially cancel out each other. It's pretty much the same idea used with noise-cancelling headphones. And don't forget: It had to be done for the four- and eight-cylinder modes of the LT1.

The system had to be tuned, too, to deliver a pleasing, appropriately performance sound at wide-open throttle. In fact, Corsa developed two sound levels: Sport (loud) and Xtreme (louder).

You've probably noticed that we haven't said a word yet in this story about the power advantage that comes with an aftermarket exhaust system. That's because, truthfully, there's not really much to tell. Starting with the C6, the Corvette's factory exhaust systems left little on the table when it came to restriction, and the C7's left even less. Corsa says its system is worth about 5 horsepower when used with an optional 3-inch-diameter Double Helixx X-pipe. That's a wash in our book, but as we said from the beginning, adding an exhaust system to a new Corvette these days is more about making an aural statement than uncorking a vast reserve of horsepower.

We should add that Corsa's X-pipe is an "off road use only" part, so keep that in mind before adding it to your new Corvette before its next smog test.

We also discovered there's more to swapping the exhaust system on a C7 than Corvettes of years past, including removing the lower part of the rear fascia. It's a more involved process that may take it out of the realm of garage bolt-on for many enthusiasts. The guys at Smokey's Dyno and Performance, in Akron, Ohio, tackled the job on our subject C7. We also ran the car on the dyno for good measure, confirming our expectation of comparable power output to the factory system.

On the plus side, the Corsa muffler assembly is four pounds lighter than the stock system and the Double Helixx X-pipe sheds another two pounds. There's nothing wrong with shaving a few pounds off the curb weight.

And what does it all cost? Well, the average retail price for the muffler/exhaust tips kit is right around $1,700 and the X-pipe is around $600, judging by what we've seen online, putting on the parts cost around $2,300 as depicted in our story.

Check out the accompanying photos to see what it takes to change the voice of a C7 Stingray.

01. Corsa Performance’s C7 cat-back exhaust system is offered in Sport or Xtreme sound levels, each including 4.5-inch exhaust tips with either polished or black tips. The black tips have a trapezoidal shape. We went with the classic polished round tips for our project. It’s good to know the 304L stainless steel system is 50-state legal, is manufactured in the good ol’ US of A, and comes with a limited lifetime warranty. It will replace the standard C7 exhaust or the NPP performance exhaust.

02. To maximize performance, we also went with the Double Helixx X-pipe, which can add around 5 horsepower and 5 lb-ft of torque when used with Corsa’s muffler system. It’s not like the old days of letting loose the corked-up potential trapped by restrictive mufflers, but the exhaust swap definitely adds bark to the Corvette’s bite.

03. There aren’t any exotic tools required for the installation, but it’s more involved than previous-generation Corvettes because it involves the removal of the lower rear fascia, starting with a pair of 10mm bolts above the factory exhaust tips. A deep-well socket and extension are required to reach them.

04. Ten 7mm fasteners hold on the bottom corners of the lower fascia and they’re removed next.

05. These plastic fascia inserts come out after that. They’re simply clipped in place and can be removed by pushing the mounting tabs outward from the inside of the fascia.

06. Next, the lower fascia is unsnapped at each corner by pushing the mounting tabs inward while simultaneously the fascia up and backward. This view from the underside of the fascia shows the tab at the lower left and the slot it connects to at the right (arrows).

07. There are also 10mm fascia fasteners at the top edge that must be removed. They’re hiding behind reflectors and were only snapped into place at the factory, so care must be taken not to damage the mounting tabs when removing them.

08. A couple more of the upper fascia fasteners are located behind the license plate, so it has to be removed, too.

09. Finally, the lower fascia is removed, providing full access to the exhaust system.

10. Next, it’s time to disconnect the mufflers, which includes removing a couple of 10mm bolts that lock the mufflers together (arrows), as well as hangers on the outer sides of each muffler.

11. There are also electrical connections to disconnect for the internal valves in the exhaust system. With the NPP exhaust, there’s a connection at the rear of each muffler; and all models have a connection at the front of each muffler for the Active Fuel Management system. On automatic-equipped cars, the transmission must be put in Neutral to provide enough clearance with the shift linkage on the driver-side.

12. To allow the stock system to droop, 15mm bolts for each axle pipe must be removed. In fact, this will help provide access to the front valve connections.

13. With the valves disconnected, the exhaust system should wiggle free of the factory crossover pipe, one side at a time.

14. Next, it’s on to the replacement of the factory crossover, which is accessed when the factory underbody shield’s 24 fasteners are removed. They include 22 13mm bolts and a pair of large 18mm bolts.

15. There are some hangers and other fasteners to contend with, but the X-pipe replacement is a simple “remove and replace” procedure. And yes, those two chambers at the right side of the factory crossover shown here are catalytic converters, which aren’t part of Corsa’s Double Helixx X-pipe. They’re unmonitored converters, so their removal won’t throw a code but their elimination officially makes the Corsa X-pipe an “off road only” part.

16. With the X-pipe swapped, it’s on to the axle-back portion of the exhaust system. We started with lopping off the Active Fuel Management valves from the stock pipes to reuse with the new system. Corsa includes templates to lay on the pipes for the proper cutting location.

17. Next, the valve sections are joined to new axle pipes via clamps. Corsa did a great job in identifying the corresponding pipes, marking them with a D for driver’s side and P for passenger. They also included arrows on the pipes (arrow) that line up with the center of each valve, ensuring the pipes are correctly “clocked.”

18. The pipes are slipped over the axle and connected to the X-pipe. The wires for the Active Fuel Management valves are also reconnected after the pipes are installed. The other valve for the NPP exhaust (if originally equipped) is eliminated, so the wiring for it can be tucked up into the chassis.

19. After reinstalling the hangers (arrow), the driver-side muffler must go in first because its mounting tab for the connection that holds the mufflers together sits farther back.

20. Looking from the backside of the system, the overlap of the mufflers’ connecting tabs is visible. The supplied fasteners are inserted to hold them together, but shouldn’t be completely tightened until the exhaust tips are properly located.

21. With the mufflers in place, but not tightly torqued, the lower rear fascia is reinstalled and the exhaust tips are attached.

22. When the exhaust tips are centered and level within the fascia opening, the system can finally be completely tightened, wrapping up the installation.

23. On Smokey’s chassis dyno, our C7 project car made 397 rear-wheel horsepower and 384 rear-wheel torque. Output climbed to 407 rwhp and 388 rwtq with the new exhaust system. No, it didn’t add a ton of power, but oh what a difference in the sound! This new Vette sounds ready for the autobahn or even Le Mans. Bring them on!