Get pro results with a Flowmaster American Thunder kit 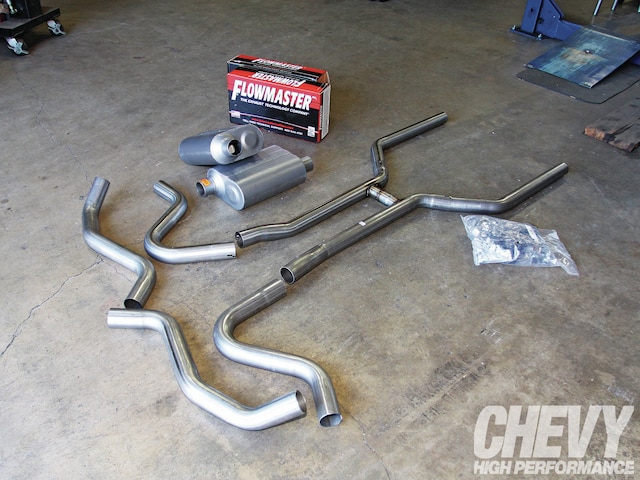 It doesn’t seem to matter how nice a restoration might be when the car changes hands, there’s always going to be something the new owner would like to improve on. In the case of John Barkley’s recently acquired ’66 SS396 Chevelle, the exhaust system was the first thing he wanted to attend to. The previous owner went to a lot of trouble and expense to build the car properly, but at the tail end of the project he knew he was going to have to sell it. Instead of installing a complete exhaust system he took the low-buck route and slapped on a set of header mufflers. For a car that’s going to spend most of its time on a dragstrip, header mufflers are an OK solution, but for a street-driven automobile the idea stinks. The first bad smell is that of deadly carbon monoxide fumes drawn into the passenger compartment; the symptoms of exposure to carbon monoxide poisoning range from burning eyes and headaches to death caused by asphyxiation. Next on the list of discomforts created by an abbreviated exhaust system is fatigue, which can be brought on by the constant drone of harsh sounds being transmitted into the passenger compartment. In no time at all, the soundwaves pounding into the car’s floor translate into a subconscious reason to dread driving the car.

The solution: Barkley chose to keep his Chevelle’s mechanical details as clean and functional as possible was to forsake a typical muffler shop installation and opt for Flowmaster’s American Thunder kit. Manufactured in Santa Rosa, California, Flowmaster’s DIY kit offers 21/2-inch mandrel-bent stainless steel instead of pinched, constricted bends formed out of mild steel that’s prone to rust, plus it’s engineered to extract as much horsepower from your car as possible. While these systems are intended for the DIY guy, quality muffler shops like to use the American Thunder kit because it saves time and presents an OEM look. Since he’s installed numerous Flowmaster kits with great results, we looked to Josh Gledhill at The Muffler Man in Placentia, California, to share some installation tips with you guys.