Supercharger Wastegate - What A Waste!

Turbo technology for your supercharger 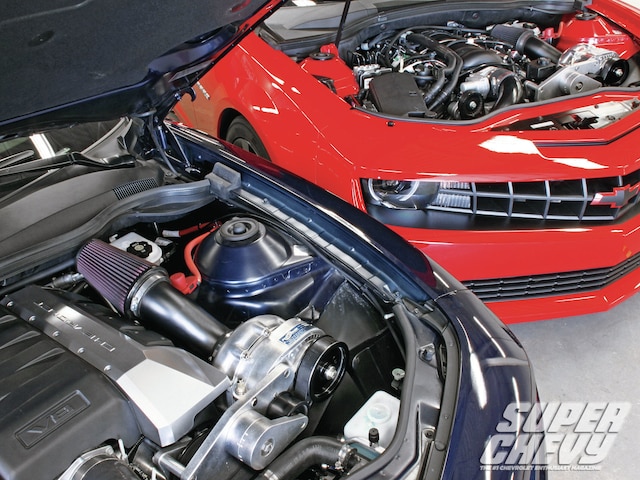 A wastegate is an item typically associated with turbo systems, but Detroit-area Stenod Performance has found great success by weaving them into supercharged engine systems to boost torque. In fact, on a pair of '10 Camaros equipped with identical bolt-on ProCharger centrifugal blowers, Stenod coaxed 60 maximum rear-wheel pound-feet more out of the wastegate-equipped car over the comparable, non-wastegate Camaro. At some points on the dyno chart, there was more than a 70 lb-ft advantage.

No matter how you slice it, that's a significant increase, and the path to delivering it is relatively simple--if you're handy at welding and tuning. And it was a solution that Stenod's founder, Joe Borschke, says fits the bill for optimizing blower performance across a broader rpm range. "We've been really impressed with the fit, finish and general performance of the ProCharger systems for new Camaros. But they don't seem to make as much torque as they do horsepower," says Borschke. "That's primarily a function of the boost curve of the centrifugal design."

When it comes to supercharged power, positive displacement superchargers (Roots and Screw-type) and centrifugal blowers produce it differently. In simple terms, a centrifugal supercharger's boost increases exponentially with engine speed, while a positive displacement supercharger's airflow is linear--with maximum boost occurring very low in the rpm band. That means a Roots or twin-screw blower that delivers, for example, 500 cubic feet per minute (cfm) of air at 2,500 rpm will push 1,000 cfm at 5,000 rpm. A Roots or twin-screw blower makes a small amount of boost whenever the engine is running, while a centrifugal supercharger's boost builds in a non-linear way, much like a turbocharger. As rpm increases, the airflow from the compressor will increase at a faster rate. Because of that, maximum boost is not achieved until the engine's red line, or maximum rpm level. So, the centrifugal "rolls" into its boost, and is generally easier to launch, with a stronger feel through the mid-range and upper rpm levels.

The non-linear airflow delivery also makes the centrifugal supercharger better-suited to drag racing, because the graduated boost application enables an easier launch, with greater power coming on as the rpm increases. Of course, with peak boost not occurring until redline, the blower's effectiveness is not fully realized at lower rpm. In other words, unless you're performing full-throttle launches at every stop light, you're not going to feel the maximum punch of a centrifugal blower. That's not to say centrifugals are weak on the street. We've driven a number of ProCharger-blown '10 Camaros, and they're admirably powerful. But there's no denying that more torque delivered lower in the rpm band would help overcome the Fifth Gens' considerable mass.

"We've installed, tuned, and dyno tested a bunch of ProCharger systems upgraded to the D-1SC compressor. You can pretty much bank on them making 550 hp and 500 lb-ft of torque at the wheels, with about 8 pounds of boost," says Borschke. "We wanted to get more torque out of them to make the cars feel stronger and more fun on the street. We turned to the wastegate, then started experimenting with smaller-diameter blower pulleys to push more torque higher in the rpm band. "In a turbo engine, a wastegate bleeds off excessive exhaust gas pressure to regulate the speed of the turbine. It's the same idea with a centrifugal supercharger, the compressor of which performs similarly to the turbine of a turbocharger.

"With the wastegate, we can spin the blower faster to produce greater boost, and bleed off the extra pressure that's not necessary," says Borschke. "This allows the boost to come on much sooner, gaining midrange power--especially torque--that you can really feel on the street. But more importantly, it helps maintain the right boost for to prevent detonation in a stock engine. "Of course, there's a fine line to balance with the size of the wastegate. Stenod uses a 44mm unit on LS3 Camaros, which Borschke reports is plenty large enough. "If you go too big, you bleed off too much pressure and go backwards on power," he says.

Borschke says with D-1SC-equipped combinations, the 44mm wastegate enables the blower system to make about 7.5 pounds of boost by 4,900 rpm, compared to the 8 pounds generated at the top of the tachometer on "standard" systems. "It's right in the sweet spot of making power where you're going to use it on the street," he says. "We've seen upwards of 590 rear-wheel torque with some vehicles. "In many ways, this combination delivers the best of the turbo and blower worlds. The boost level remains constant at higher rpm, like with turbos, but delivers the unmistakable torque characteristic of blowers. Borschke admits a bit a torque is sacrificed at the top end, but that's not a concern in a car used primarily on the street.

"You'll never miss it on the street," he says. "It's a small price to pay for the greater feeling of power in the mid-range. Heck, the right cam change would help alleviate that high-rpm deficiency, too. "Check out the accompanying dyno chart and graphs, you'll see the dramatic differences with and without the wastegate. As Borschke mentioned earlier, the standard kit delivered the expected 550 rwhp/500 rwtq numbers, while the wastegate-equipped car's best numbers were 579 hp and 568 lb-ft of torque to the tires. That's about 6-percent greater horsepower and 14-percent more torque.

A closer look at the numbers is more revealing: The wastegate-equipped car crossed the 500 rwtq threshold by 3,700 rpm. That was 1,000 rpm sooner than the other car, and it held above the 500 mark through 5,900 rpm. The non-wastegate car flirted with 500 lb-ft only between 5,200 and 5,400 rpm. It's a similar story with the rear-wheel horsepower, where the non-wastegate Camaro peaked, of course, at the 6,100 rpm limit. The Camaro with the wastegate hit its peak a few hundred rpm earlier; and it bested the other car's peak prior to 5,400 rpm. Of course, we had to ask about the bottom line on this modification. "Generally, it's about $600 for the cost of the wastegate and installing it," says Borschke. "There are tuning implications, too, so it's better to do it with installation of the kit. It would cost more to retro-fit a wastegate on a car that already had the blower system installed and tuned." So, on a blower system that costs approximately $7,000 to purchase and have professionally installed, the wastegate upgrade represents less than a 10-percent premium. In bang-for-the-buck terms, that seems like a deal to us.

Sure, there are plenty of bolt-on blower systems for the 2010 Camaro, but if you plan to really turn up the boost, you'll want to consider a purpose-built short block with lower-compression, forged pistons. That's what you get in Chevy Performance's LSX376 (part number 19171049) crate engine. It combines the economical and strong LSX Bowtie standard-deck block with the Camaro SS' production LS3 engine's high-flow, L92-style cylinder heads and camshaft – along with a durable set of forged aluminum pistons that deliver a blower-friendly 9.0:1 compression ratio that is crucial for avoiding detonation in high-boost combinations. The Chevy-orange color of the iron cylinder block looks great under the hood, too. The LSX376 is available from any Chevrolet Performance Parts dealer (meaning your local GM dealership's parts department) or online at gmperformanceparts.com.

Super Chevy contributor and author of the main story above has written a book about supercharging and turbocharging the LS engine, titled--appropriately enough--How To Supercharged and Turbocharge GM LS-Series Engines. It is a full-color book published by CarTech, and went on sale this past June. It covers the basics of forced induction, follows the installation projects of blower and turbo kits, and offers detailed chapters on building an LS engine to support high-boost combinations, with numerous sidebars highlighting real-world projects. Go to Cartechbooks.com for more information, or visit sites like amazon.com to order.

9 The wastegate is accounted for in the supercharger system's tuning. Here, Stenod Performance's Joe Borschke checks the results of another chassis dyno test that showed Chris Radd's wastegate-equipped car putting down nearly 570 lb-ft and 580 hp to the tires—on an otherwise stock engine, using only the bolt-on blower kit and the custom wastegate.

10 This dyno graph plots the performance of Lou Katz's non-wastegate Camaro over Chris Radd's wastegate-equipped car on Stenod's Mustang chassis dyno. Note that both cars produced the same peak of 7.9 pounds of boost during their respective tests. The dotted lines represent Katz's car and it's clear that, while delivering strong performance, the wastegate combination of Radd's Camaro performs better across the entire rpm band. At lower rpm, where most street driving occurs, the torque advantage with the wastegate is about 70 lb-ft.

1964 Chevrolet Impala SS - All In The Family

Dwight Bower fell in love with his father's 1964 Chevrolet Impala SS and just had to buy it off his dad. He restored it into the beauty it is today.

Robert O'Neill fell in love at first sight with this 1964 Chevrolet Impala SS. O'Neill has kept the old memories alive with the Impala's classic looks, while still adding some impressive mods.

Living the American Dream, VIDEO: Hendrick Motorsports Engineer Richie Parker Does More with Less. Born with no arms, Parker is proud to perform daily tasks without assistance – including engineering chassis and body components for profession racing.

We install products from Hotchkis, Show Wheels, and Nitto on a STOCK '64 Impala to flatten it out in the corners, provide better handling, and give it a much-needed dose of Super Chevy performance and style. Super Chevy Magazine.