We've Got A Dart 509 Nestled In The TCI Front Clip In Our Nova Street/Strip Project Car. 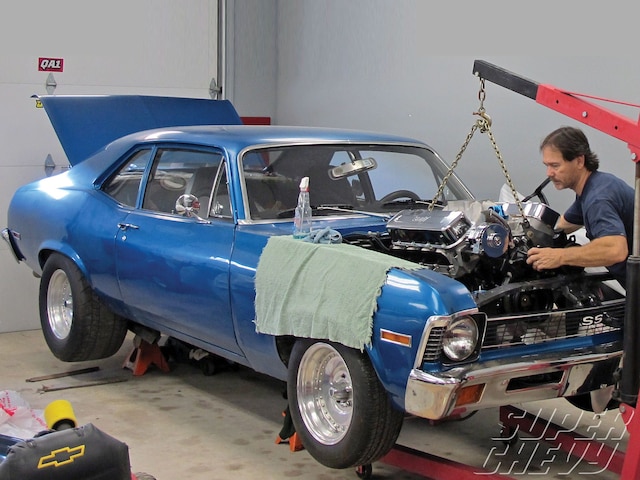 When we introduced our street/strip Nova project in the February '11 issue, it received a new Total Cost Involved tubular front clip (tubular subframe, control arms, coilover shocks, rack-and-pinion steering, etc.) The theory was that the TCI front clip would shave 140 pounds off the nose, so dropping in an aluminum-headed Dart 509 big-block would be about the same weight as if we had a stock '68-74 Nova with an iron-headed small-block. But with the TCI front clip (2-inch dropped spindles, wider track, superior suspension, brakes and steering), our X-body would become a more roadworthy and enjoyable driver off the strip, too. In this episode we learned there are a few modifications needed to install a rat motor with tall valve covers using Hooker Super Competition 2 1/8-inch equal-length headers and a 3-inch exhaust into a '68-74 Nova.

Believe us, all the extra work was well worth it once we drove the Nova down the road. Unfortunately, the TH350 trans was slipping so we couldn't feel the 509 putting the power to the pavement. Next up we'll install the Performance Automatic Turbo 400, Currie 9-inch rear, and measure for a new beefy driveshaft. Then we'll be able to feel the power being put to the pavement. We're looking forward to enjoying the Nova's much improved street-driving manners with the TCI front clip and finding out how it'll work on the strip once the serious drivetrain is in the car.