How to Assemble a Big-Block Chevy Short-Block Part 1

Part 1: In a world of LS swaps, we build an old-school big-block 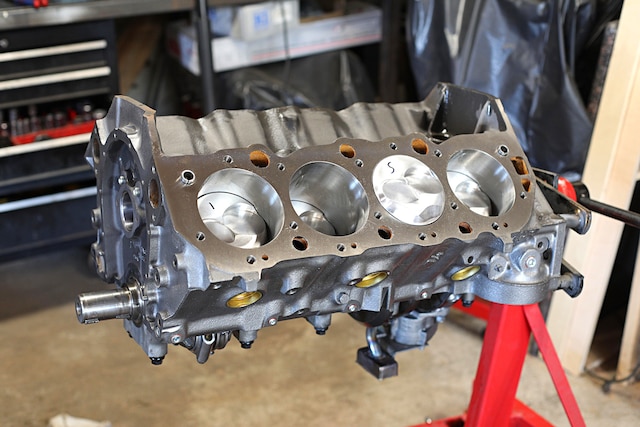 Disputing the relevance and performance of the LS engine is an uphill and unwinnable battle. It’s light, strong, cheap, powerful, and just about every other engine-oriented adjective in the dictionary. It’s a plucky 25-year-old with a bad attitude and an ego-boosting penchant for racking up race wins. But an LS engine will never deliver the gut-rattling thump and tree-pulling torque of a tried-and-true big-block Chevy. And, while it may not be the cheapest route to horsepower, it is—without a doubt—still one of the coolest.

To that end, we sourced a 454ci big-block core, which are still readily available at local wrecking yards, and treated it to a full performance revamp, including forged pistons; forged connecting rods; and a polished, stock crankshaft. Follow along as we assemble the bottom end of this 475ci ground-pounder.

Block Prep and Machine Work
The block at hand began life as a Mark IV 454, sourced from a defunct ’80s-era GMC motorhome. It was disassembled and taken to L&R Engine in Santa Fe Springs, California, for a much-needed scrub down in the hot tank and an overbore of 0.060-inch. The beauty of these Mark IV big-block engines is that they can routinely go 0.060-inch, 0.080-inch, and sometimes as much as 0.120-inch over, pending a healthy sonic check reading. L&R checked the block’s deck surfaces for flatness, opting to cut them lightly to square them up. They also checked the crankshaft main bearing bores to make sure they were in line, which they were. A line bore and a hone would have been the remedy if they were not.

Our build, destined for street duty, will utilize a set of JE forged pistons, K1 Technologies H-beam connecting rods, and a stock 4.000-inch-stroke crankshaft. L&R balanced the rotating assembly and we picked up the whole gang of parts, bagged, tagged, and ready for assembly.

Once home, the first step of any engine build is to thoroughly clean the block and all of the parts. We used paint thinner and a lint-free rag to wipe down all of the cylinder bores, deck surfaces, and bearing saddles, and compressed air to blow out all of the oil galleries and other miscellaneous nooks and crannies of the block. The last step of our cleaning process was to chase all of the threads on the engine, most importantly those for the main caps and head bolts. Clean threads will allow the torque wrench to more accurately do its job when the bolts are snugged to spec.

Checking the Vitals
While it’s tempting to toss all of the new high-performance goodies straight into the engine, it is extremely important to check all of the critical clearances. Manufacturing tolerances of aftermarket components are better than ever, but there is always room for error and it’s far better to spot it on the engine stand than in the engine bay.

To measure the bearing clearance on our engine we used a series of outside micrometers and a dial bore gauge. These are precision tools that, while affordable, do bring some cost to a project. If multiple engine builds are in your future, invest in a good set of measuring equipment. However, if you’re planning a one-and-done build, it’s best to let your local machine shop do the measuring.

We began our blueprinting process by measuring the outer diameter of the pistons and comparing it to the diameter of the bores. Pistons expand as they get hot, so JE specs a required piston-to-wall clearance. Using our measuring tools, we confirmed that each piston had the required 0.0045-inch of clearance needed.

ext up was measuring the clearance between the Clevite engine bearings and the crankshaft journals. We installed all of the bearing shells in the connecting rods and mains and tightened the caps to the specified torque. By subtracting the measured diameter of the crankshaft journals from the measured diameter of both the rod and main bearings, we were able to establish that all of the clearances were within spec.

Bolting It All Together
Building an engine isn’t always the glamorous job it may outwardly seem. Fitting piston rings, installing spiro-locks, and unabashedly applying assembly lubricant to every tool within reach are all a normal part of the game.

Follow along in the accompanying photos as we take our block from empty to full, and stay tuned for Part 2 where we detail every aspect of assembling the top-end of the engine! CHP

1. In a world of late-model engines, the big-block Chevy stands alone. Oh, how the world has changed.

2. L&R Engines in Santa Fe Springs, California, bored our block 0.060-inch over to 4.310-inch. After getting it back, we cleaned the bores with paint thinner and ran a cleaning tap through all the threads.

3. Filling the bores and adding strength to the bottom end of this 475ci big-block build is a set of forged JE pistons and K1 Technologies connecting rods. To keep costs reasonable, and since this engine is destined for street duty, we reused the low-mileage factory crankshaft.

4. Pistons are not round, but instead oval in shape. To properly measure them, we used a caliper to mark the gauge point, then a micrometer to find their exact dimension.

5. A dial bore gauge was used to measure how much larger the bores were than the pistons. On the cylinder shown, the clearance came out to 0.00452-inch, dead on the spec provided with the pistons.

6. A micrometer was used to measure the outer diameter of the main journals of the crankshaft …

7. … then a dial bore gauge to measure the diameter of the main bearings with the main caps torqued in place. Each cap was checked and the clearance measured between 0.0027–0.0028-inch.

8. Measuring the connecting rod clearance works much the same as the mains, only you’ll mic’ the rod journal and the inside of the rod with bearing installed and caps torqued. Our clearance came out to 0.002-inch. The general rule is 0.001-inch per each inch of journal diameter.

9. If you don’t have access to micrometers and/or dial bore gauges, Plastigauge still does an acceptable job of checking bearing clearances. It works by allowing the rod caps and mains to squish it, then comparing the result to a key on the wrapper. While nowhere near as accurate as a micrometer, it will certainly alert an assembler to a clearance problem.

10. With all of the rod and main clearances checked, we installed our bearings and rear main seal and lubed them with engine oil.

11. Next, the crankshaft was gently set into the bearing shells and the main caps installed.

12. Using ARP bolts, we torqued the main caps in three stages to the specified torque value of 95 ft-lb.

13. With the crank firmly installed, a dial gauge was used to verify crankshaft endplay. Use a flat-blade screwdriver to pry the crankshaft forward, zero out the gauge, and note the reading when the crank is pried in the opposite direction. The endplay should read between 0.006-0.010-inch.

14. Next up was the long and tedious task of setting the ring gaps. Our pistons included JE Pro Seal rings, which need to be gapped to suit the application the engine will be used for.

16. After grinding on the ring filer, use a fine file to remove any burs from the edges of the ring. Burs can, and will, scratch your bore as the ring is installed as you check the gap.

17. Use a square or piston-ring-squaring tool to make sure the ring is sitting level in the bore and a feeler gauge to check the ring gap. This process will be repeated for each ring (top and second). While the oil ring needs to be checked too, it usually does not require filing.

18. Because each bore will have some small variance in size, label the rings for the bore they were gapped to and keep them in that order.

19. Next, it was time to hang the pistons, rings, and rods. Note which cylinder the piston will be installed in by writing it on the crown with a marker. Valve pockets will always face up. Next, we installed the four spiro-locks required to hold the wristpin in each piston.

20. The pistons were mounted on the rods making sure that the chamfer side of the rod’s big-end was facing outward to clear the filet of the crankshaft.

21. This set of pistons requires an oil ring support since the wristpin bisects the oil ring groove. This is no big deal, but requires the spacer be installed first, before the oil ring. Make sure the small divot on the spacer falls inside the pin bore, which will prevent the support from rotating.

22. Next, the oil rings are installed, beginning with the expander, followed by the bottom oil ring, and lastly the top oil ring. Orient the gaps of the two oil rings 180 degrees apart from each other.

24. Install the connecting rod bearings and lube them with engine oil.

25. Using a tapered ring compressor and some gentle (very gentle) persuasion from a dead blow hammer, install the pistons and rods into the bore. Be careful not to allow the rod edge to scratch the cylinder during installation.

26. Slide the rod’s big end onto the crankshaft journal and install the caps, making sure the stamped numbers on the shoulder match. Tighten the rod bolts by hand, equally, until the cap is snug.

27. The last step of the short-block build is to torque the rods. K1 provides a rod stretch figure, which is the most accurate way to tighten them. The rods were torqued to 40 ft-lb, and we verified using an ARP rod stretch gauge that the bolts were within the required stretch figure. That completes our short-block. In the next segment we will document in detail a full top-end and valvetrain installation.