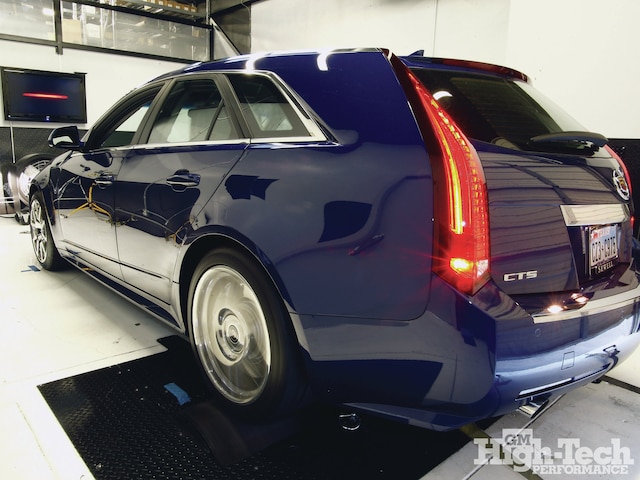 We feel your pain; the ZL1 that you have on order, or are lusting about, is almost at the dealer and you can't wait to get behind the wheel and mat the pedal to the floorboard. While you wait, let's take a look at the LSA used in the 2012 Cadillac CTS-V for insight into the power potential of the LSA in stock and modified forms. GM has been putting the 6.2 liter LSA engine into Cadillac CTS-V's since the 2009 model year and in that platform they are rated at 556 horsepower at 6100 rpm with 551 lb-ft of torque at 3800. When the ZL1 debuts it is rated at 580 horsepower at 6000 rpm and 556 lb-ft at 4200. Both engines use the sixth-generation Eaton supercharger that displaces 1.9 liters per revolution and generates a maximum boost of 9.0 psi. No other changes to the LSA's internal specs have been released leading us to surmise that the cylinder heads and camshaft are identical. The relatively low lift, low overlap of the camshaft (198/216 at .050 with .480/.480-inch lift) is designed to promote a smoother idle and excellent low-RPM driving characteristics while the LSA specific cylinder heads are modified versions of the L92 and LS3 heads, which are roto-cast with premium A356T6 alloy that significantly reduces porosity in the castings making them stronger. The difference in horsepower and torque ratings are said to be attributable to the ZL1's unique induction system, which features a lower-restriction air filter, dual inlet paths and improved supercharger housing airflow. On the exhaust side, while the CTS-V has "high-moly" cast iron exhaust manifolds, the Camaro uses stainless steel manifolds and has an active dual-mode exhaust muffler.

According to Andy Mages, owner of ADM Performance, "When Cadillac released the LSA into the CTS-V in 2009 we found out that in stock form the engine would put down on average about 455-rwhp and 450 lb-ft of torque through the automatic (GM Hydra-Matic 6L90E) and an additional 20 horsepower and pound-feet of torque if equipped with the Tremec 6060 manual transmission. As soon as the CTS-V was released we saw the potential of the platform and started developing packages to take the LSA from 650 through over 900 crankshaft horsepower utilizing the stock supercharger. The Stage I package is rated at 650 crankshaft horsepower and features an overdrive supercharger pulley (either a Lingenfelter upper pulley with a 2.55-inch diameter and ADM ported snout or a Lingenfelter lower harmonic balancer with a 9.17-inch diameter pulley), air intake and tune." There are also Stage II and Stage III packages, which are rated up to 750 crankshaft horsepower, and still utilize the stock bottom-end. However, after that ADM begins custom tailoring the build to the owner's needs. "With a ZL1 on order and packages already designed for the Camaro we are prepared to offer the CTS-V and ZL1 customer a full range of options to meet their budget and horsepower goals."

To demonstrate the Stage I package we used a 2012 CTS-V wagon with a 6-speed manual, which the owner requested that we keep as close to stock appearing (and idling) as possible yet still generate at least 675-700 horsepower. This made the Lingenfelter upper pulley and ADM ported snout the best option, since the lower harmonic balancer would be easier to detect. Since the CTS-V intake comes with a restrictive stock filter and the intake tube has the tendency to at least "partially" collapse at elevated boost levels we teamed up with Halltech to test their CTS-V Stinger Carbon Fiber Cold Air Intake System. The system contains an attractive carbon fiber intake tube and K&N air filter. Halltech recommends modifying the stock air-box for additional air flow and advertises that the intake system makes 20 rear wheel horsepower on a stock CTS-V without tuning.

To prepare for the stock test on ADM's Dynojet 224X rear wheel dyno (located on site in a separate temperature controlled facility) the wagon was delivered with 860 miles on the odometer and a full tank of 93-octane gasoline. The cold tire pressures were set to factory specifications and the wagon was strapped down. The wires from the Dynojet, to record the run including boost pressure, were attached and EFI Live was connected to the E67 ECM. The dyno brake was released and the engine was warmed up until the coolant temperature indicated 172 degrees and was then pulled to the redline of 6200. When the dyno numbers flashed up on the screen and read an SAE corrected 516-rwhp with 512 lb-ft of torque both ADM and GMHTP were shocked. After reviewing all of the parameters of the run on EFI Live, no knock retard was present and the peaks were obtained right where Cadillac rated them. After checking everything a second time, the wagon was warmed back up and pulled at a slightly higher coolant temperature of 178 degrees. This time when the rollers stopped it belted out 525-rwhp with 521 lb-ft of torque. Once again no knock retard was logged and the peak boost came in at 9.44 pounds with an average of 8 pounds from 2100 to 6150 rpm.

According to Mages, "Since 475-485-rwhp on a Dynojet is normal for the manual transmission CTS-V's I went back and pulled up stock tune files and their logged runs from '09-'11 models to compare. After reviewing the files, nothing had been changed from earlier model years except for small changes in the spark correction idle, idle RPM, fuel cutoff and the misfire graph. Timing, boost and anything that would affect power production were unchanged. With GMHTP watching every step of the way about the only conclusions we could draw were that either this engine was a "factory freak" or GM made unpublished changes to the LSA." Only time will tell! With an estimated 18% driveline loss (21 % for autos) the V wagon was making approximately 640 horsepower at the crank with 635 lb-ft of torque. After calling the customer to review the results of the baseline dyno session it was agreed that the Stage I package would be more than sufficient to exceed the power goals, reducing the overall cost yet still providing the wagon a major boost in power. And away we went in search of an additional 60-70 horsepower.