Montana may soon be known for more than just its mountains, thanks to Jason Rusch and his '87 Turbo T Limited 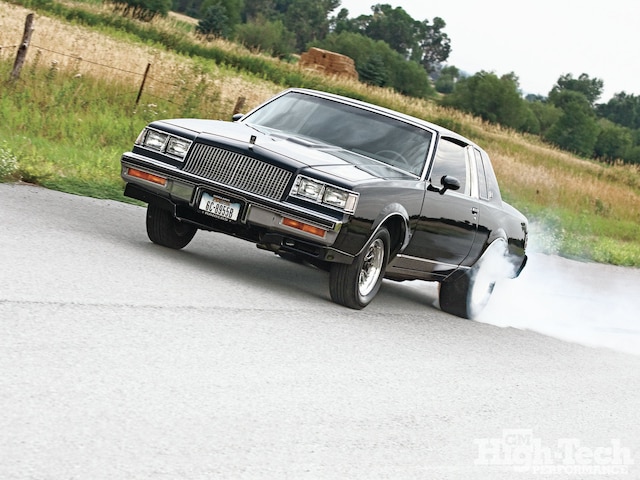 Like many Turbo Buick owners, Jason Rusch had plenty of experience with Detroit muscle before he ever laid a hand on his '87 Turbo T Limited. The long list includes a '55 Chevy two-door, '67 Buick Skylark, '70 Buick GSX, '86 IROC Camaro, '67 and '68 Dodge Charger, and even a '79 El Camino. But it wasn't until he purchased a '87 Grand National that owning some truly fast machinery became an imperative. At the time (2003) he was living in San Diego, California and came across a classified ad for a "GNX." As it turns out the car was not a GNX, but that letdown was immediately replaced by infatuation with the big, comfy leather seats and chrome that adorned the Turbo T Limited. Sweetening the deal, the T was meticulously maintained and fast (for a stock Buick). Jason knew he had to sell his GN and purchase the Turbo T.

The story goes like many others, for several years Jason enjoyed the Regal in its mostly stock condition. However, the plot took a sharp turn when Jason moved back to the remote reaches of Montana from whence he came. In 2006 he decided to have McGinley Motorsports in his hometown of Bozeman, MT freshen the paint using 9 coats of PPG black. Unfortunately his power upgrades didn't pan out nearly as well. Living in Montana, Jason was far removed from the Turbo Buick scene for help and guidance. Luckily he was able to draw upon the TurboBuick.com forum and in 2010 he went at it reinvigorated, armed with more knowledge, and even had a quality shop to pull it all together.

Starting with the motor, Jim Keck of Advanced Engines in Helena, MT completed the machine work on the stock LC2 block and upgraded rotated assembly. A stock stroke GN1 Performance crankshaft, Diamond pistons, and Eagle rods were secured by an RJC Racing girdle and lubricated by a TA Performance pump and RJC pan. Champion GN1 aluminum heads (right out of the box) sealed up the motor, using a Comp Cams 212/212-duration hydraulic roller and T&D rockers to actuate its valves. The assembly was completed by Tim Fountaine at The Auto Works Inc. in Bozeman, who wired the motor up with a FAST XFI computer, 79-pound injectors, and a Quad Air double-pumper in the stock fuel tank. Of course many of the periphery components were also upgraded, including the throttle body and air intake with pieces from Accufab and RJC Racing.

Moving air into and out of the stock cube V-6 also required many aftermarket pieces that Jason says were upgraded with help from Hartline Performance. Among them were a billet wheel, Precision 6765 turbo and 46mm wastegate with a GN1 Super Extreme front-mount intercooler. Four-inch piping was used on the cold side, which also has the benefit of AlkyControl dual nozzle methanol injection to augment the 91-octane swill (usually spiked with Lucas Oil octane booster). This helps Jason run 21-pounds of boost pressure daily, though the combination has made 733-rear wheel horsepower at 26psi before backing it down with master tuner Cal Hartline behind the keyboard. Feeding the turbo is a set of ATR manifolds with a 3-inch downpipe relieving the recycled gases, exiting through a GN1 exhaust.

As you would expect, the driveline is substantially upgraded to hold such brutal force. Renowned 200-4R builder Lonnie Dyers of Extreme Automatics was commissioned to upgrade the stock trans to Stage III specifications including the input shaft, which had previously came apart in spectacular fashion. This turned out to be the perfect opportunity, though, to adjust the stall on the PTC 10-inch torque converter. With a lower stall speed, Jason thinks he can easily best his previous track times and it helped him average 30 miles per gallon on a 700-mile trip with his family last summer. However, a few more suspension upgrades this winter might be necessary for a little more bite on the track. Luckily he has already taken the liberty of upgrading the axles, so it shouldn't take much work to safely run some low 6s in the eighth-mile on M&H drag radials (in street trim).

Despite its racy 15-inch Weld Vitesse RT forged wheels, Jason's Turbo T isn't a track beater, though. Using the radial tires he has put almost 5,000 street miles on this combination, which has proven surprisingly reliable--a surprise given its 683-rear wheel horsepower. Some have urged him to dump in some 110-octane and turn up the boost even higher, but he says he is already near the limits of the stock block. So it appears he is at the precipice of either another engine build, or the leisurely enjoyment of a solid and well-tuned combination. Though some will question his dyno numbers, Jason has traveled to several different chassis dynos to prove his Limited is legit and credits his tuner Cal Hartline for the little LC2's ability to stomp on even some fast street bikes. The look of surprise that this potent V-6 inspires is what makes Jason grateful he found such talented help, which made the experience "relatively painless…minus the bill."

Check out Gene Fleury's 1987 Buick Turbo Regal! This is a legit WE4 Turbo-T, a rare all-black Regal that was offered as a "budget Grand National" in 1987.

Check out Brian Lorenz's 1987 Buick Regal Turbo T! With only 17,000 miles after nine years of ownership, this golden beauty remains very close to the factory condition aside from a few performance-related accessories.

Check out this 1987 GNX Buick with a Bosch sequential EFI system to produce 15lbs of boost only at GM High-Tech Performance Magazine.

Check out this 1987 Buick Turbo get Mickey Thompson Tires and Mickey Thompson Wheels and test all its upgrades down the strip. Only at www.gmhightechperformance.com, the official site for GM High-Tech Performance Magazine.

Check out this 1987 Buick Turbo get a Precision Turbo Turbocharger and Precision Turbo Intercooler, Featured in the 2007 March Issue of GM High Tech Performance Magazine.

Check out part VI of XFI Install, Tuning and Dyno Testing with a Fast XFI ECU, Featured in the 2007 April Issue of GM High-Tech Performance Magazine