Redline Motorsports takes its flagship '10 Camaro to nearly 800 RWHP-On pump gas- with a pair of turbochargers from Turbo Technology. 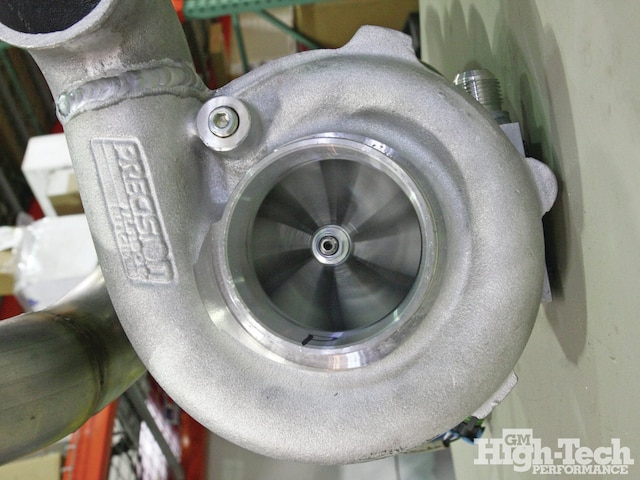 Twin Turbos--just uttering those words conjures up 6-second LSX Shootout drag radial cars as well ridiculous street worthy power that would make even the most jaded enthusiasts impressed. Horsepower and torque potential seem almost limitless when twin turbochargers are added to any suitable platform. The problem, however, lies in the packaging of the two snail-shaped magical air compressors. Adding a turbo or two is easy when you aren't dealing with the confines of an engine bay--especially like the area under the hood of the 5th Gen Camaro. We aren't dealing with a dyno cell with unlimited elbow room. In the real world, the turbochargers, intercooler, and (hot and cold) pipes need to avoid shock towers, steering components, ABS braking systems, engine accessories, etc. It isn't easy to build a system in a car and adding insult to injury is fitting all the major piping while being mindful of efficiency and maximum effectiveness.

Scared? Don't be because this month Turbo Technology did all the hard work on the design and manufacturing side so Redline Motorsports could easily bolt-on a set of twins to its in-house R&D mule, a 2010 Camaro SS. "I have a set of turbos on my daily-driven 1,000 HP C6 Z06 and I just had to add a pair to the Camaro. We also have some customer inquiries about twin-turbo systems," comments Tanner. The '10 Camaro on these pages has served Tanner well, first as the test mule for his Redline Motorsports shop and then serving as the launching platform for the HTR Camaro packages from DeNooyer Chevrolet.

The Camaro features a built 427ci LS3 with forged everything--crankshaft, connected rods, and pistons. The bottom-end was ready for anything to be thrown at it. Moving topside, the 427 wears CNC-ported LS3 heads and a custom Redline camshaft. Longtime readers will remember this setup as GMHTP covered the conversion from a Magnuson TVS 2300 to Kenne Bell 2.8L twin-screw supercharger. The Kenne Bell helped rotate the 20-inch Forza Forged wheels to 796 rwhp and 750 lb-ft of torque. But as Tanner said, the lure of twin turbos was far too great, so off came the supercharger system and on went a FAST composite intake manifold. The Redline staff also changed around some engine accessories and fuel lines for the conversion away from a positive displacement supercharger.

The fuel system was up to the task of supplying whatever kind of power Tanner dialed in. It consists of a -8AN fuel feed and -6AN return with a Lingenfelter fuel hat featuring twin 190 lph fuel pumps. The fuel injectors were upgraded to 98 lb/hr high impedance injectors from Injector Dynamics. The 98s replace a set of 60 lb/hr injectors, which had simply ran out of volume during our Kenne Bell testing a few months back. Injector Dynamics is a new name in the marketplace and offers a variety of high impedance style injectors up to 240 lb/hr--giving enthusiasts a lot of choices when working with the factory ECM.

The installation task was made easier thanks to a lift, which allowed Redline's Bruce Hotaling to remove the nose and front wheels. As we began, the lure of turbocharging usually fades in the planning stages, but Turbo Technology mounts the components cleanly and the pipes are routed without disrupting anything. The turbochargers are tucked on either side of the transmission and feed into the air-to-air intercooler up front. The intercooler is the most visible item of the turbo because it hangs behind the front bumper frame and catches air from the center opening in the lower valence. The air is discharged from the intercooler and routed into the engine compartment to feed the hungry engine. The inlet pipes that feed the turbochargers require an extension (supplied in kit) for the anti-sway bar, but outside of that very little was moved around for fitment.

Some modification to the exhaust system was also required given Howard's requirement for larger down pipes. The system typically comes with 2.5-inch down pipes, but Tanner opted to have Turbo Technology provide 3-inch outlets knowing that 1,000 hp was around the corner. Tanner and Hotaling welded slip-on ends to an American Racing X-pipe in order to mate it with the Turbo Technology piping. The previous American Racing long-tube headers were replaced by factory manifolds since Turbo Technology opted to utilize the factory parts instead of fabricating aftermarket manifolds for the kit that would add further expense. Outside of those few mods the system bolted on cleanly and easily.

Turbo Technology includes two Precision Turbo 62mm turbochargers and Tanner chose to upgrade the impellers to the billet version and ball bearing center sections. Two of these turbochargers, in the proper application, are capable of moving enough air to support 1,400 hp. Tanner likes big power, but he is running the Camaro on pump gas and a pair of Precision Turbo 46mm wastegates is responsible for keeping the peak manifold pressure to just 13.5 psi. A Tial 50mm bypass valve is plumbed into the pipe after the intercooler to vent off unwanted pressure in the system when the throttle blade is closed.

Tanner works over the ECM using EFI Live software and the addition of the turbocharging kit and new injectors required some manipulation. First, the injector size was enlarged, Tanner admits, "I like working with the Injector Dynamic fuel injectors because they provide numerous critical data required for me to make adjustments in the calibration." The MAF sensor functions also had to be adjusted due to the change in MAF sensor location. In the Kenne Bell combination the sensor was placed in a 4.25-inch pipe and was a draw-through setup. The Turbo Technology system uses a 3.5-inch pipe with the MAF sensor and it is a blow-through style. A draw-through means the compressor (turbo or blower) is after the MAF sensor while a blow-through setup is when the MAF sensor is located after the air has been through the compressor.

A few easy pulls on the dyno were done to make sure all systems were go. It was time to let it rip-the boost gauge swept past 5 psi, then 10 psi, and finally settled at 13.3 psi as the engine rpm climbed rapidly to its 5,700-rpm peak. The dyno computer instantly posted the results-798 rwhp and 808 lb-ft of torque.