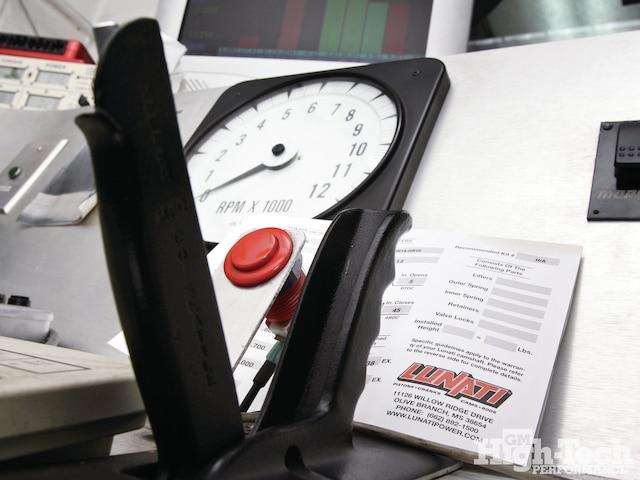 So far, our LS1 Camshaft Roundup has been exciting and informative, with a slew of ever growing camshafts and go-fast parts finding their way onto an otherwise stock LS1 on the engine dyno at RaceKrafters in Lancaster, Pennsylvania. If you have been following along, we have seen camshafts of varying designs and have been surprised by a number of combinations that applied power in different ways, all for different applications. While our initial goal was to find out what camshaft would make the maximum power on our test stand LS1--drivability be damned--we ended up finding that, as always, a number of different variables can all work together (or against each other) to create a variety of positive outcomes. Some camshafts in our test did exactly what we expected them to do while others went slightly against the grain and shocked the crowd with impressive power under the curve, insane peak power, or a combination of both, depending on the setup.

For this, the final part of our LS1 Camshaft Roundup, we reached out to the master cam grinders at Lunati and had them send two camshafts, one custom and one off the shelf, that they felt best represented their max effort grinds. After a quick phone conversation with Billy Carroll and Jeff Sams, Lunati put the machines to work and ground two interesting camshafts, both of which fit ever so slightly outside of the usual camshaft train of thought, for one reason or another. However, even with relatively small lift and conservative duration, what we found were two killer bumpsticks for two wildly different applications, one of which ended up being the most powerful camshaft in our entire test, although it should be noted that the engine configuration has changed with each part of our series, growing from a stock "241" casting, stock LS6 manifold LS1 to a much more robust engine featuring a pair of Patriot Predator cylinder heads and a FAST LSXR 102mm intake manifold.

All said and done, what we left Racekrafters with was an engine that could run extremely well in a variety of applications and do so on a modest budget. If you're thinking about putting together a 500-plus horsepower, stock bottom end LS1 with a set of budget conscious heads, a slew of typical bolt-on parts and an aggressive camshaft, we've proved that there are a variety of quality camshafts out there that can do the job and do it well. Heck, even looking back on our stock cylinder head testing, several camshafts made over, or extremely close to, 500 hp and could help propel any well appointed chassis to a couple of round wins at any event in the country. That said, follow along with us as we jump head first into the last two Lunati camshafts and see what they can do on the engine dyno at RaceKrafters.

Testing Procedure and Camshaft Guidelines
One last time, it is important to review our testing procedure and guidelines before beginning to interpret the data. As with any test, it is imperative to maintain strict guidelines to ensure valid results. Below, you will find our procedures for testing, along with our camshaft specification guidelines. While the former was very specific, the latter was left wide open, allowing manufactures and builders to spec camshafts to their liking.

Camshaft Specs
• If it fits in a stock LS1, it's in the test
• Must be an off the shelf grind, no custom camshafts
• No fly cutting, no head gasket spacing, no tricks
• Comp Cams springs, retainers, pushrods and timing set
• Everything else goes!

Baseline
As previously discussed, our baseline numbers come from a stock '98 LS1 short-block. Prior to any testing, Racekrafters replaced the stock '98 heads with a fresh set of 241-casting LS1 units and swapped intake manifolds in favor of the newer LS6 with a matching throttle body. On the engine dyno, Racekrafters bolted up a set of 1.75-inch long-tube headers, which flow into a pair of 2.5-inch pipes and matching 2.5-inch Flowmaster mufflers to replicate real world results and, secondarily, to keep our ears from bleeding after days of testing! To help maintain consistent coolant temps, Racekrafters relies on a Meziere electric water pump and keeps it running in between pulls to help prevent heat-soak. In that form, with the stock camshaft and cylinder heads, the old LS1 laid down some impressive numbers with 418 hp on tap at 6000 rpm and 422 lb-ft of torque. Not shown on the baseline graph is the addition of a FAST 102 LSXR intake manifold, which we installed during our first test session. It should be noted that all of the following tests were completed using the FAST 102 LSXR intake manifold and not the stock LS6.

230/238-duration, .600/.600-inch lift, 113 LSA
On paper, the Lunati 230/238-duration camshaft looked like a great selection, with a nice duration split, a valvespring friendly amount of lift and a tuner approved 113-degree lobe separation angle. However we did wonder if the mild lift (.600/.600-inch) would give up a little peak power, especially when combined with our Patriot Predator cylinder heads, which flowed 303 cfm at .600 and upwards of 312 cfm by .700-inches. Nevertheless, we trusted the grinders at Lunati and still had high hopes for the camshaft, especially knowing how well similar camshafts had done in previous tests.

After a couple of runs to get the engine up to temperature, the crew at RaceKrafters laid down the hammer and recorded the results. Peak power rang in at an astounding 541.4 hp, immediately vaulting our Lunati grind to the number one spot on our power chart, and 458.1 lb-ft of torque at 4800 rpm, which was in-line with other camshafts of this size. Speaking of torque, our average torque from 3000-4500rpm was 413.6, up 7.98 lb-ft over the stock LS1 camshaft (and cylinder heads and intake manifold). As with every "large" camshaft in our test with the FAST LSXR 102mm intake manifold, the Lunati 230/238 did exhibit a noticeable dip in torque from 3700-4500 rpm and as such, we would still recommend a large stall converter or rear gear to help keep this camshaft in its powerband in a street/strip application. With 541.4 hp on tap and the ability to spin to 6900 rpm without losing substantial power, this Lunati 230/238 would be an absolute animal on any heads/cam combination.

219/223-duration, .625/.625-inch lift, 112 LSA
Well, this was an interesting choice for a camshaft in an all out power test...Coming from Lunati's record breaking 230/238-duration beast, everyone in the RaceKrafters dyno control room looked confused when we read the specs on the second and final Lunati camshaft in our test (PN 60516). 219/223-duration, .625/.625-inches of lift cut on a 112 LSA. Seems small, we thought, "I wonder why Lunati would send such a small camshaft for this test?" Designed as a camshaft with a "good idle, excellent low to midrange torque and horsepower" we slowly started to get the picture. Lunati's recommended RPM range was 1800-6400, a far cry from the 4500-plus monsters we had tested on previous days.

Well, it didn't take more than a couple seconds of wide-open throttle to find out exactly what Lunati was thinking. Remember that dip in torque we keep talking about? It was gone--completely gone--and our average torque skyrocketed from a base of 405 lb-ft from 3000-4500 rpm to an incredible 433.6 lb-ft, a gain of 28 lb-ft over the range. Where the stock camshaft made 412.9 lb-ft of torque at 4000 rpm, the Lunati 219/223 was already up to 442.9 (a gain of 30 lb-ft) and peak torque came by 4900 rpm, where this camshaft made 466.6 lb-ft compared to the stock camshaft's 422 lb-ft at 4800 rpm (a gain of 44.6 lb-ft of torque). Horsepower, of course, followed suit, with the Lunati stick making peak power at 6400 rpm, just as the cam card said, recording 508.4 horsepower. Now, compared to the monster 541.4 hp that the larger camshaft made, that may seem disappointing, but when you compare useable power and torque "under the curve," it is tough to make a valid case against the little Lunati that could. Whether you put this camshaft in a road race car, a weekend driver or a heavy pickup that could use the torque, it would be an absolute blast to drive and really feel great every time you laid into the loud pedal.