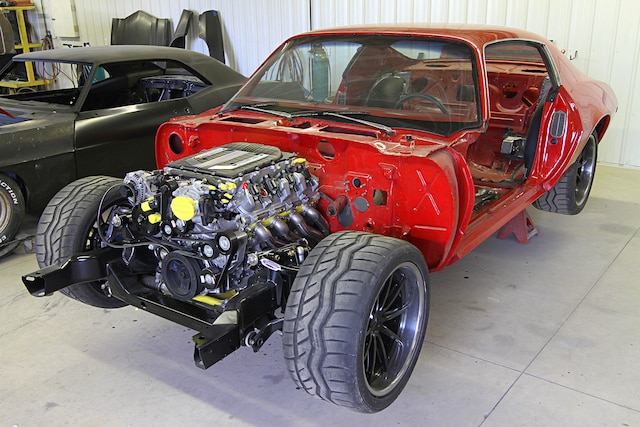 With Forgeline wheels seemingly rolling on just about every pro-touring machine on the street or track, it was inevitable the Dayton, Ohio-based manufacturer would tackle the 21st century street machine genre with an entry of its own. From what we've seen of their car so far a 1970 Camaro it promises to set a new performance benchmark.

"We've been dreaming about building our own world-class pro-touring Camaro for years," says Dave Schardt, the president of Forgeline Motorsports. "We're a long-time supporter of this segment and have been the wheel of choice for many pro-touring builders. Now, it's our turn to participate."

Smitty's Custom Automotive, in Tiffin, Ohio, got the nod to build the car and for good reason. Owner Chris Smith is one of the country's premiere pro-touring builders and you've already seen his work if you've seen that dark red '67 Chevy C-10 or screaming yellow C3 RideTech "48-Hour Corvette" at OPTIMA Challenge events.

"We've seen his work through events such as Goodguys and OPTIMA and knew he was the one for this project," says Schardt. "We wanted to do a Gen 2 Camaro, as well, for a number of reasons, including the fact you can really shove some wide tires under it, compared to first-generation F-bodies."

The car is also a showcase for the latest in crate engine supremacy: Chevrolet Performance's Corvette Z06-derived LT4. It's one of the earliest projects we know of to employ the new supercharged, 650-horsepower engine package (besides Chevrolet's own SEMA show car). Naturally, some fabrication has been required, particularly when it came to resting the engine in a Detroit Speed front subframe and constructing the headers.

"I wanted the LT4 because I owned a new Z06 and felt the engine was the best part of the car," says Schardt. "It has definitely brought some challenges, but that's OK. Good things come to those who wait and I'm really looking forward to putting this Camaro through its paces when it's finished."

Frankly, we're angling for a little seat time in this high-tech street machine, too. The car was supposed to be done by the time we shot the accompanying build pics, but clearly the "to do" list didn't quite jibe with the calendar. Nevertheless, the progress so far is encouraging and tantalizing. And with Chris Smith proving he's as adept driving as he is building these cars, this Camaro is poised to shake up the ranks of the pro-touring hierarchy.

The heart of the project is Chevrolet Performance's new LT4 crate engine, which is used straight out of the Corvette Z06. Its "wow" elements include Rotocast A356T6 aluminum heads that are stronger and handle heat better than the conventional heads in the naturally aspirated LT1 engine. The Eaton TVS-based blower also spins faster than the previous LS9 supercharger. It all adds up to 650 hp and 650 lb.-ft. of torque. It's offered in wet-sump and dry-sump versions and Chevrolet Performance offers an engine controller for manual transmission applications, which is good, because that's what this Camaro has. Scoggin-Dickey is selling them for around $14,000, which ain't bad at all for 650 force-fed horses.

One of the head-scratchers the crew at Smitty's Custom Automotive was grappling with during our visit was the power steering. The Corvette Z06 uses and electric power steering system, meaning there's no conventional engine-driven hydraulic pump. It will have to be added to the engine's drive system, but where the pump and requisite pulley would go was the dilemma.

Ultimate Headers tacked up a set of custom long-tube headers for the car. The unique feature of the headers is Ultimate's flange, which is designed to seal better and reduce weight. They're easily identifiable by the ribbed flange reinforcements around the tubes.

The crate engine doesn't come with an air conditioning compressor, but that wasn't a concern, because a complete Vintage Air A/C and climate control system will be fitted. The firewall was carved out to accommodate it.

A Detroit Speed hydroformed front subframe houses the LT4. Its strength and stiffness enable much more precise suspension tuning, because there's less chassis flex. It also allows tires up to 10 inches wide to be used without modifications to the inner fenders. A little sheet metal work will be required here, because the 315-series front tires are 12.4 inches wide.

The Detroit Speed front suspension includes tubular upper and lower control arms, as well as a splined stabilizer bar and a rack-and-pinion steering system. The Detroit Speed-supplied coil-overs were swapped for Ridetech triple-adjustable shocks and springs. It's a race car suspension for the street.

A TREMEC T-56 Magnum six-speed manual transmission backs the LT4, requiring a new sheet metal tunnel to tuck it up in the Camaro's unitized body structure. The Magnum, of course, contains the stronger guts of the TR6060 transmission, but within the "envelope" of the T-56 gearbox. Note how the new trans tunnel cover is ribbed to match the original contours of the floor. Nice touch.

The rear axle is built to channel all of the LT4's 650 lb.-ft. torque. It's Moser-prepared, 3.89-geard 9-inch center section featuring an Eaton Detroit Truetrac diff. It's all stuffed in a Detroit Speed axle housing that's connected to the company's QUADRALink a four-link rear suspension.

Detroit Speed deep tubs are de rigueur equipment on pro-touring F-bodies these days and this car's got them. They allow up to 335-series rubber, but for the time being, the Camaro wears 315-series in the rear, just like the front.

More from the Detroit Speed catalog came in the form of subframe connectors and while they're unobtrusive beneath the car, they poke through the floor, requiring more sheet metal surgery than, say, welding a set of connectors to a fourth-gen F-body.

More work to come for the Camaro will include a RideTech TigerCage roll cage and a set of Baer Brakes 14-inch Extreme 6S disc brakes.

Of course, the car will roll on Forgeline wheels 18-inch GA3C wheels, to be exact. Forgeline president found the Camaro only a couple of minutes from his home and purchased it from a customer.