Newsletter
Sign Up today for our FREE Newsletter and get the latest articles and news delivered right to your inbox.
Home
Camaro Performers
How To
Engines & Drivetrain

We Build A Wallet-Friendly Mill For Project Track Rat And Hit The Dyno. 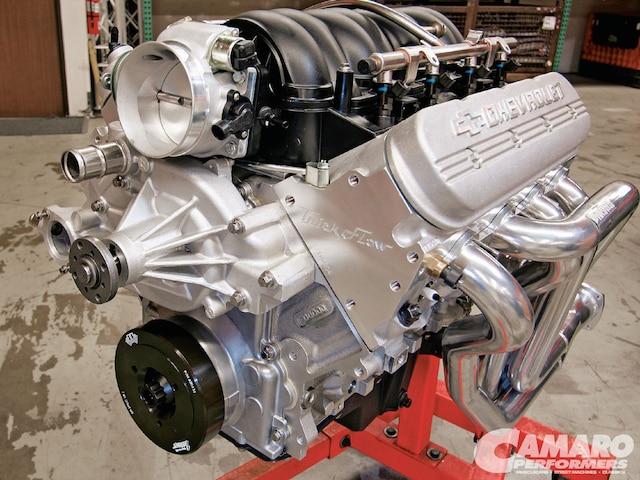 •When does "just a little bit more" become too much of a good thing? The answer is that it occurs a lot sooner than most gearheads think. We're not sure when it happened, but at some point an engine didn't start becoming impressive until it was churning out 700, 800, or even 900 hp. In the never-ending quest to keep up with the Joneses, guys started one-upping each other in terms of both displacement and power. Blowers begat turbos, which then gave way to twin turbos. It became a race to see who could be the next king of the hill. Only one problem: said hill is made out of cash. Ironically, in the world of street machines, and Pro Touring cars, a 700hp twin-turbo engine is nearly useless. Have you ever had a pair of turbos go into boost during the apex of a curve? Let's just say it's an easy way to morph a 90-degree turn into a 360-degree spinfest. Straightline performance is tough as well since even massive, 335 tires end up being spun into molten slag by an overabundance of power.

And while we dig a car with bodacious amounts of power as much as the next guy, the reality is that you don't really need that much power to have fun. Besides, a more moderately powered engine means you'll have more cash to spend on other areas of your car.

From the beginning we knew our '68 Track Rat project car was going to be LSpowered, but we wanted to try something a bit different. Instead of building the biggest, baddest LS engine possible, the idea became to scale things down a bit and see what we could do with less displacement. We've always felt that the 5.3L version of The General's LS series had been somewhat overlooked. The downside was the iron block added unwanted weight to the front of car and this certainly didn't help handling. One afternoon we were at Turn Key Engine Supply and noticed that they had a few pallets of 5.3L blocks on hand, but what really got our cranial gears turning was that these were aluminum versions. The idea gelled in our heads to build a 5.3L all-aluminum engine that would use mostly GM parts to keep the costs down. To get the power up a bit we would drop in a few aftermarket widgets, but overall our goal would be to get good power at a reasonable cost. Also, while our mill featured an aluminum block, all of the tech will translate to someone wanting to tackle an even more frugal iron block version.

Power Parts Costs •When it came time to figure out the cost of Track Rat's mill we stumbled over the quandary of what to include. Some items like pretty ARP accessory fasteners didn't affect the power at all. The head studs were a choice we made to facilitate future head swap stories and could easily be replaced with GM head bolts at our power levels. With that in mind, we decided to just go with the core parts needed to hit these dyno numbers and stay in one piece. Turn Key also offers a selection of oil pans and accessories to make dropping an LS engine into your Camaro a snap. In particular, their five-wire harness and MEFI 4 computer makes doing a swap nearly painless. If you don't mind the weight penalty you could swap out an iron block. We also ran the same short-block with a smaller cam, GM rockers, and factory heads. Power dropped to 408/416, but the combo cost around $1,500 less. Whatever your budget or horsepower goals are, Turn Key has just the engine to motivate your Camaro.