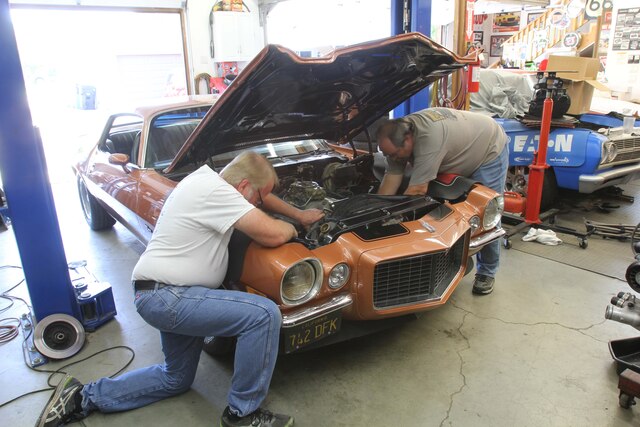 Some car projects become much more than just an exercise in coaxing an engine to life or cleaning a pile of corrosion underneath a stuck thermostat. Sometimes there's a personal side to it- a call to duty that makes the effort much more important than just the process of replacing parts. I drove down to Escondido, California just north of San Diego - back in 1979 to write a Cruisin' USA story for the February, 1980 issue of Car Craft. It was at that cruise that I met a trio of young guys - Matt Collins, Doug Eisberg, and Craig Campman and I was accepted as part of the circle of friends.

Decades later, it was a shock when Doug called me to let me know that our friend Matt had suffered a heart attack that took his life. Matt had assumed control over Collins Motors' used car lot from his dad and had also assembled an enviable collection of cars and parts that, unfortunately, his family and friends now had to help disperse. Matt's favorite was his 1970 Z28 but another second gen in the collection was a bronze 1971 Z28 RS Camaro that had been Matt's mother's car complete with a 330-horse 350 and a four-speed. That one detail tells you Matt's mom is cool. The Z28 endured several subsequent owners but eventually Matt brought it back and was in the midst of its restoration.

Doug and I went to look at the car a few months later. The lure for Doug was that he had worked at the lot and had often laid mechanic's hands on the Collins Camaro. Doug has since done well for himself and is still very much a gear head with his 496ci '69 Nova (Sleeping Sniper, Aug, 2009). It took not much more than a cursory look at this Camaro for Doug to realize here was a unique connection to his friend and an opportunity to complete what Matt had begun.

Doug and another mutual friend Eric Rosendahl planned to do much of the work themselves but Doug's garage is entirely too small and decided to bring the car to my shop north of Los Angeles where we had the benefit of a hoist. The car had not been started since 1998, but was nearly complete. Doug and Eric accomplished several items on the check list before the big three-day weekend thrash at my shop began. They flushed the old brake fluid, bled the brakes, and burnished decades of rust from the rotors. Doug also bought a new set of BFG Radial TA's for the car mounted on a set of correct factory Rally wheels.

The big question was the engine. The original 350 had disappeared, replaced with what Doug could decipher as a well-built 355 short block, with iron heads, stamped rockers, and what appeared to be a solid, flattappet cam. The compression ratio was an unknown although cranking compression came in around 185 psi. We started with fresh oil, a new Fram filter, a quick pressure lube, followed by fresh spark plugs.

The first hurtle appeared when the starter quickly failed, at which time we learned there was no dedicated ground cable between the trunk-mounted battery and the engine. Doug purchased length of 1-0 multi-strand welding cable and with copper lug ends, we installed the cable to complete the ground circuit yet still the starter balked. If Star Trek's TV doctor Leonard "Bones" McCoy had been there, he could have delivered his oft-repeated line, "He's dead, Jim!"

We lifted a near-new Powermaster starter motor off a convenient project engine in my shop and soon the Camaro motor spinning with 24-volt-like enthusiasm. That led to removing an Anaconda-like length of old -8 AN stainless hose from the car along with an aged electric fuel pump, opting instead for a stock mechanical pump and an Inline Tube replacement set of fuel lines. We installed the new lines in the OE location and then employed a Harbor Freight video camera to inspect the gas tank for corrosion. Luckily, nature had not corroded the tank, so with a fresh Holley 750 cfm carb and fuel we attempted to start the engine.

We scanned each exhaust port with our handy infrared heat gun and cylinders 2 and 7 revealed low readings. Looking more closely at the plug wires exposed them as solid-core versions that are no longer socially acceptable. More importantly, we discovered two plugs with smashed electrodes. This is common when using projected nose spark plugs with domed piston with the ground straps in the down orientation. We replaced them all with a set of non-projected nose Autolite plugs. We also added a set of Accel spark plug wires again stolen from that same project engine.

A run to the gas station three blocks away resulted in a badly overheated engine. We allowed it to cool and discovered a horrible pile of corrosion underneath the thermostat. It was so bad that it had completely blocked coolant flow out of the engine, preventing it from returning to the radiator. We then drained, flushed, and cleaned the system, replacing the coolant with reverse-osmosis filtered water and a bottle of HyperKuhl anti-corrosion additive to prevent the corrosion from returning.

Now with a revitalized start, fuel, and cooling systems, we could spend some time tuning. We set the initial timing at 15 degrees BTDC that produced 35 degrees of total mechanical timing and set the idle mixture to improve the idle quality. The engine still had a slight lifter tic at idle but now it idled smoothly at 750 rpm with 17 inches of vacuum on the gauge.
A second test drive produced a mild off-idle stumble but otherwise decent performance. The 20-mile freeway jaunt on this 100-degree summer weekend revealed the engine ran warmer than it should an indicated 210 degrees that we confirmed with our heat gun on the end of the cylinder head. We suspect the radiator is now partially clogged at the bottom from all the heavy corrosion that probably settled in the radiator. A trip to the radiator shop will no doubt solve that issue.

Doug's immediate plans are to convert to a cross-flow muffler, which will also improve the ground clearance. Another possible change might be to a taller rear gear. The Doug Nash (now the Richmond) 5-speed comes with a 3.27:1 First gear ratio. If Doug switched to a 2.56:1 rear gear, the First gear ratio would be identical to a wide-ratio Muncie four-speed (2.56:1 First gear) with a 3.27:1 rear gear. The Nash has a 1.23:1 fourth gear, which (with a 2.56:1 rear gear) would be equal to a Muncie in fourth gear with a 3.15:1 rear gear. Shifting into fifth gear (1:1) however, the car would feel like shifting into overdrive.

All these small repairs demanded a full 2 days of shop time to complete. We took our time because this car was more than just another old car remake. It's one of those tales where the machine was transcended by the friendships formed nearly 40 years ago. This wasn't about getting it running so someone could turn a quick dollar. This was all about completing a project Matt was unable to finish. With a little help from his friends, the Camaro is now back on the road, karma has been satisfied, and the world might just be a better place.

We spent the better part of three days breathing life back into Matt's old Camaro. While occasionally frustrating, spinning wrenches with friends on a project like this completely fulfills the definition of fun. That's Doug Eisberg is on the left with Eric Rosendahl on the right.

The Camaro arrived on the back of a flat bed, but it left three days later making noise and annoying the neighbors like it did in 1998.

This is what front and rear disc brakes look like after sitting for 19 years. The cob webs were no extra charge and yes, that is a factory rear disc brake 12-bolt

We replaced the old starter with this permanent magnet version from Painless. Combined with a fully-accredited ground circuit, the motor now not only cranks with gusto but it sounds very cool doing it.

After we got the engine fired, the next impediment was the engine ran flat. We discovered two smashed ground electrodes courtesy of the domed pistons. Indexing the plugs would have allowed us to continue but we instead just plugged in a set of Autolite short reach plugs and a new set of Accel spark plug wires.

After the engine overheated, we discovered this mess under the thermostat. Our friend Jay Ross, who makes the No-Rosion and HyperKuhl radiator treatments, told us this stuff is what he calls an anti-freeze gel, a witch's brew of nasty stuff that he says we're lucky were still soft enough to flush out. We did have to chisel some of it out under the thermostat.

After flushing and draining the engine to get rid of all that nastiness, we refilled the radiator with filtered water and a bottle of Jay Ross' HyperKuhl radiator treatment that is a combination of corrosion protection and a coolant performance enhancer. We've been using his No-Rosion protection for years it really works.

Doug had successfully negotiated the California DMV and was rewarded with new tags that expressed a jump of almost two decades.

Of course, we couldn't do work especially on Sunday morning without donuts and we should have advertised this fact on social media but by that time, we had the project almost finished.

Just so you know we didn't make all this up, here's the pile of parts and trash left over from the experience. For the record, a -8 fuel line will probably feed something like 1,200 hp a bit overkill for this car!

Here's the engine in its final configuration. That's the original chrome air cleaner that will probably be replaced in the future. I may not look like much right now but the goal was to make it run first. Doug will have this rascal shined up very soon.

This is the Doug Nash (now Richmond) five-speed in the car. The clutch and trans all work well, but there are plans to replace the scattershield with a stock aluminum bellhousing and dial in the centerline.

While it came in on a flatbed, it left cruising quite comfortably under its own power. Doug reported that by the time it limbered up on the way home even the turn signals returned to normal function. We'll take that as a positive sign.

This second-gen 1971 Chevrolet Camaro is a track terror – check it out!